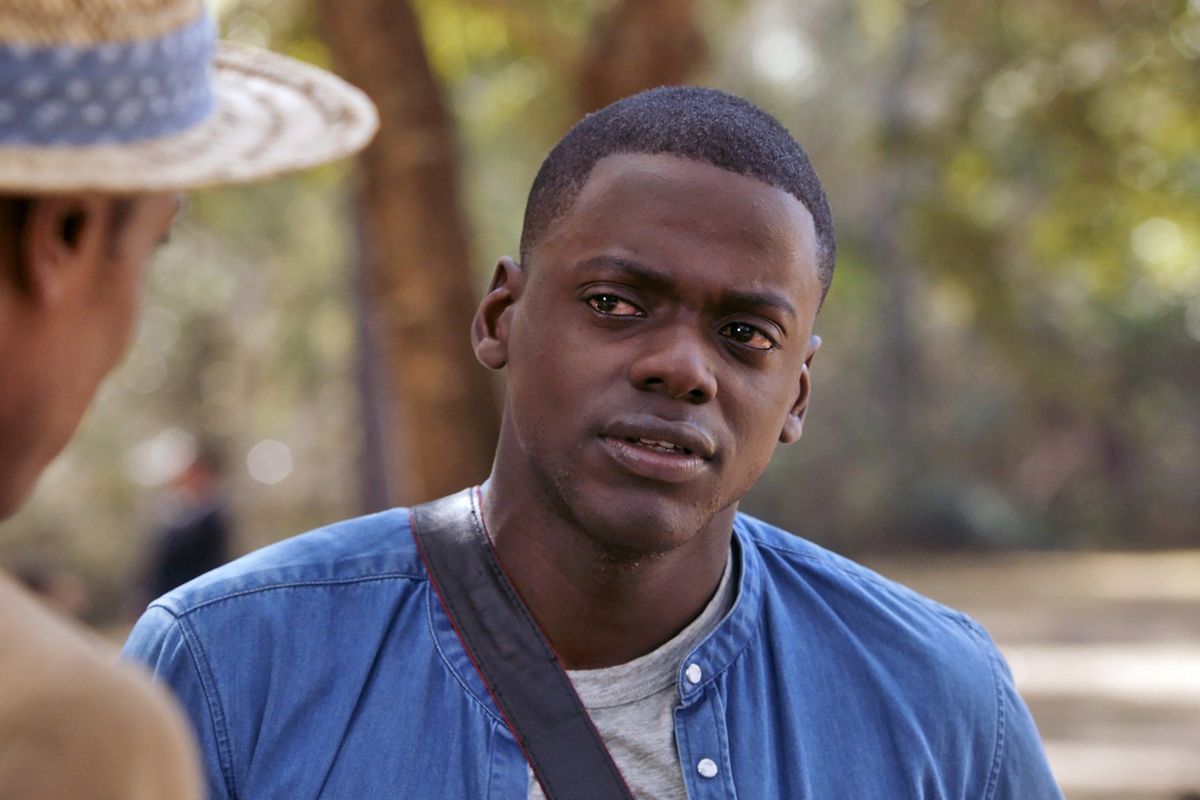 Prior to this year, you'd be forgiven for not having heard of Daniel Kaluuya. The British actor has had several premiere television roles in shows like Black Mirror and Skins, as well as in the 2015 film Sicario. But despite that, he's more or less flown under the radar—especially for American audiences. That will be changing after this weekend, when the Jordan Peele-directed horror film Get Out hits theaters nationwide with Kaluuya as its star.

The film follows a young Black man named Chris (played by Kaluuya) as he goes to visit the family of his white girlfriend (Girls' Allison Williams) in a rich suburban town. The film, Peele's directing debut, features the same clever sort of cultural commentary that made Key & Peele such a runaway success. It's harrowing in its pace, blending teeth-chattering suspense, jaw-dropping twists, and just the right amount of comedic relief. We spoke to Daniel Kaluuya over the phone to find out how it feels to work with one of your idols, what makes Jordan Peele such an open director, and why the scariest monster of them all is racism.

How were you originally approached for this role?

I got an email about it and immediately was like, "It's a horror movie!" I remember it saying that in the email. I was just like, "Wow, I have to make this happen." I felt that if I got to do anything with Jordan, I could take that to my grave. So my manager and I are talking and I'm like, "I love Key & Peele! I love it, my friends love it, it's a really big deal," and he was like, "Well, he's a big fan of you." I was shocked! It was like…how is that? That doesn't even make sense! What do you mean?

Then—this was in March 2015 or right around then—I was chatting with Peele and he was talking about how much he watched Black Mirror and stuff like that. So we started talking about the script and it really resonated. I was just like, I've got to do it. But then for loads of months, I didn't hear anything. I did Sicario, and the weekend that it came out, I went to LA [for the premiere]. While I was in LA, I had a meeting [with the producers of Get Out], and they said in the audition that I got the part but I still wasn't sure. Then they texted me that I got it, but I still wasn't sure. They kept saying, "You got the part!" and I was still just like…nah. And then after that, I finally believed it.

You said that you were a fan before. What was it like to work with someone you were such a fan of?

It was great. He's a really open director, which is really quite exciting and rare. He's from an improvisation background and I am as well, so that's what I found to be really exciting. He was just very open to suggestions about what we think, how we think a scene should go. It was like we had as much investment in the character as he did. It was my first lead role in film so it was really exciting to have that experience. And there were times that he would direct as Tracy Morgan, which was amazing. He would just go from normal to talking like Tracy Morgan. And then there would be moments where he was the audience member—like a typical African-American horror audience member—and he would just be like, "No! Don't! Get out! Get out!" The whole thing was just so hilarious. He's such a cool guy.

Do you think his open approach was a result of this being the first film he had directed?

I honestly think he's just that kind of person. He's open. He's willing to listen. It's refreshing, because he was willing to say, "I don't know." And I find anyone that's willing to say "I don't know" really refreshing—because the majority of the time, we really don't know. We're all making up what we're doing. I just think he's putting the story first; it's just his approach. I think, from what I hear, that's how he did his own show [too]. He'll change things on set to make people feel better. But that's what makes it feel so alive. It's this idea that something can be made two seconds before it's shot. That element is always so exciting for me to watch on screen, and I've always wanted to be a part of it.

Get Out is a horror film, but also focuses on the ins and outs of interracial relationships. Was that a theme you related to?

I've been in relationships where the girl was a different culture, so I definitely feel that element of it. It's just the truth. The interracial shit is kind of a catalyst for the Black paranoia aspect. You feel it, you know? It's like, I can go to a party—completely unrelated—and just be around a bunch of white people that have never been around Black people, and they make it a thing. It's not like they're not being nice. They're trying to be welcoming. But the effect of that can make you feel alienated and isolated. So that was the hook in my analysis of being like, "I know that [feeling]."

Like, [my character Chris] just loves this girl. He doesn't see her as white; he just loves her. It's the fact that he loves this girl that has isolated him, because he's been incubating in New York. But then he gets taken out [of that setting] and it changes. It's like when you go to those [rural] places and then realize, "Oh! I'm Black! You have your own baggage and interpretations about me and my Black skin that has nothing actually to do with me as an individual." Even if the relationship is already happening [normally], once you put it into the public space, then it becomes an interracial relationship. So that's what kind of related to me: being seen as an idea instead of an individual.

Kaluuya as Chris and Allison Williams as Rose. Courtesy of Universal.

What was it like to be in a movie that had all of these allusions to being enslaved or sold off? Was this the first time that your Blackness was central to the character you were portraying?

Well, Blackness is a core part of everything I do and who I am. But in terms of narrative, it's an interesting thing. Everybody is going to see this differently and that's what I really liked about the script. The stuff that really got to me was just this question of: Why us? Why Black people? And that's the truth. It really is like, why us? Why Black people? What the fuck? Why the fuck are you doing this to us? It's weird but you have to put it in those terms.

And [Jordan] managed to put that question into this concept. So that's what I found really exciting. I felt like it was true, but it was an American truth. And then, he put that American truth into a certain genre. I found that really exciting because I grew up learning about American civil rights in school. I know that narrative but I haven't lived it—I just know what happened. So, with this movie, it was like, I understand this perspective, I understand this viewpoint, and I agree with this viewpoint, so I can be Chris in this situation. But I also feel like I know that Black paranoia—that feeling of being like, is it just me? That overwhelming feeling of deterioration of the mind…I know that. I've been that. I've lived that.

What are your feelings about horror as a genre?

I find horror that's grounded in reality scarier. Usually, it's monsters and ghouls and other stuff, but this is a monster from day-to-day: the monster of racism. Racism kills people. It kills people! There are people suffering—today! That, to me, is terrifying. It's this social monster that makes people live in an environment where they are hunted because of the color of their skin. There are people being shot because of the color of their skin! That's horrifying stuff! And that's why I always want to be grounded in some kind of truth [as an actor], so you can see a person trying to navigate that. You see someone that has good intentions but also see what that does to a person. I wanted to feel that anyone could watch this—no matter where you're from, no matter what you're about.

I know you're going to be in the new Black Panther film. How is that going?

It's going well. It's really exciting because, even if I weren't in this industry, I would watch a Black Panther movie. If I wasn't in Get Out, I would still watch that movie. Being in stuff that you would watch anyway or are watching anyway, and working with people that you admire, that's the most satisfying thing. To think that, on this journey, they picked me to go on this journey with them, it's amazing. Black Panther is so amazing so far, though. The script and the story, I can't tell you anything about, but it's been quite a life-changing experience.

Get Out is in theaters February 24.