Fans of Gabriel Held's popular Instagram know that the stylist and vintage dealer's mission statement is simple: collect throwback fashion gems from the '90s supermodel era and the flashier 2000s, and dress today's coolest people in them. The feed is equal parts mood board and history lesson, with a sense of humor that's rare in the fashion world. Fabulously curated, Held's studio is also the place to find obscure red carpet moments, from "unsung fashion sheroes" that range from Fiona Apple to Jada Pinkett Smith.

While the internet-famous vintage dealer's online persona is colorful as can be, it's surprisingly easy to miss the nondescript Williamsburg building where Held lives and works. It requires another glance to see that the address is correct before ringing the bell. Answering the door in a Versace Couture baseball cap, graphic t-shirt and sweatpants, Held radiates off-duty chic as he walks through the fashion closet he calls home.

"Thank you for bearing with the rescheduling and all of that," he says. It's just after New York Fashion Week and Held has been busier than usual. "It was courteous of you to offer a phone interview, but I was like, 'No, let's let her get the full experience,'" he says, laughing. 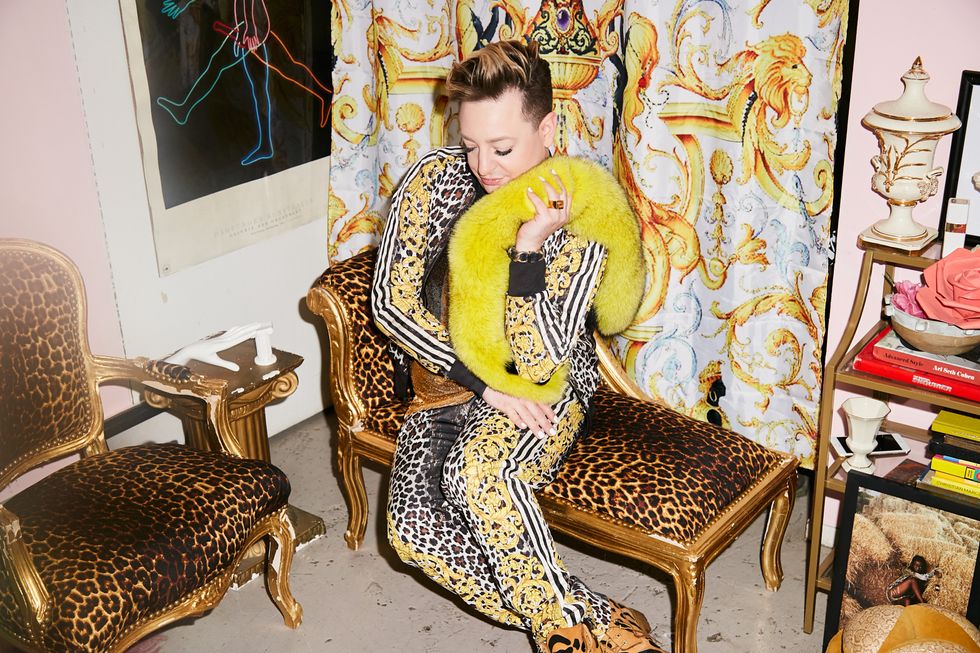 Held gestures toward garment racks lined up throughout the open loft space. There are 20 of them organized by color and they contain an estimated 2,000 pieces sourced from well over a decade of thrifting. The assortment is a visual feast: there's an accessory table and a mountainous shoe wall consisting of approximately 1,000 more pieces combined. Having started as a personal collection, Held's archive has come a long way from when it was "just two garment racks and a rusty coffee can full of loosey rings."

Now, Gabriel Held Vintage draws the attention of major pop acts and supermodels who want to come by the studio and play around. The space opens up into a sitting area framed by a blush couch and several leopard print Versace chairs. A printed Gucci shower curtain separates a changing area for privacy. On Held's coffee table, there are scraps of chainmail, press-on nails, a miniature white patent Fendi bag and an iced coffee that he sips in-between drags of his cigarette. Polaroids of recent collaborators, including everyone from Lourdes Leon to Keke Palmer and Brooke Candy, plaster the walls.

An assistant is pulling for Megan Thee Stallion, whose neo-cowgirl aesthetic and rapid-fire raps have lauded her as rap's biggest breakout artist. Hip-hop is a longtime passion of Held's; earlier this year, he even rapped his own original rhymes set to Blueface's internet-sweeping "Thotianna." Veteran R&B stylist Misa Hylton, who designed Lil' Kim's aesthetic, was one of his early supporters. 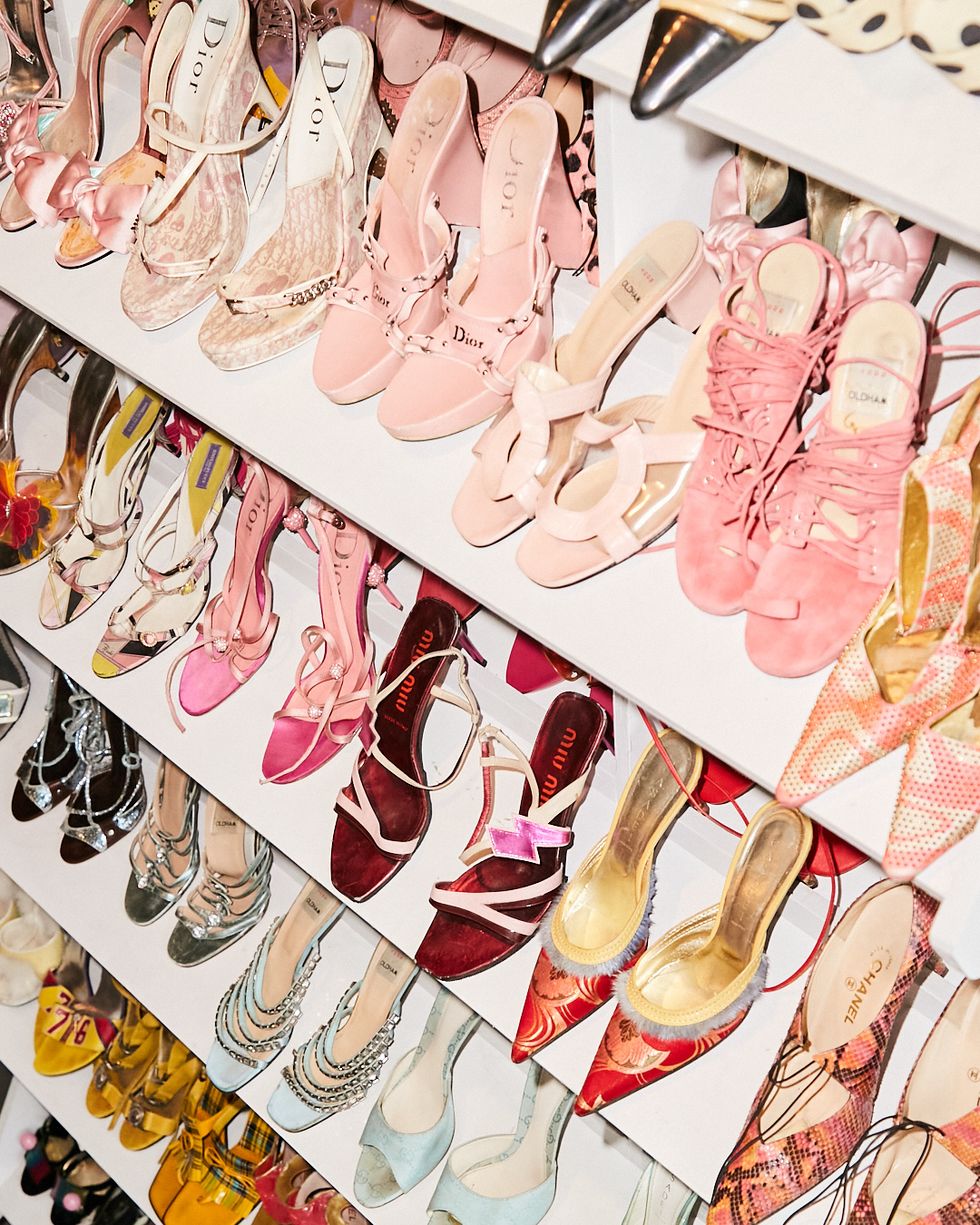 Every item turns out to be a cultural relic. Milling around, Held picks up an earring, explaining that he created it for M.I.A. during her first album cycle. "It's literally held together by thumbtacks," he says with a chuckle. It looks like a few door knockers flattened out and pieced together, which Held confirms is about right. "I was spending most of my time in the house around then doing tweezer work with crystals and a magnifying glass or whatever."

Back then, Held had just graduated from the Maryland Institute College of Art and couldn't find work. "I applied for over 200 gallery receptionist jobs and I didn't even have one interview," he recalls. Eventually Held realized the art world wasn't for him, turning instead to fashion. "I let the universe lead me where I wanted it to go."

Held's family has roots in the art world (his grandfather is abstract painter Al Held), so it was considered rebellious to turn his back on the galleries. "My family is very much of the mindset that art is the noblest contribution you can make," he says. "They didn't see fashion as being on the same level, which is why I thought it was fun." 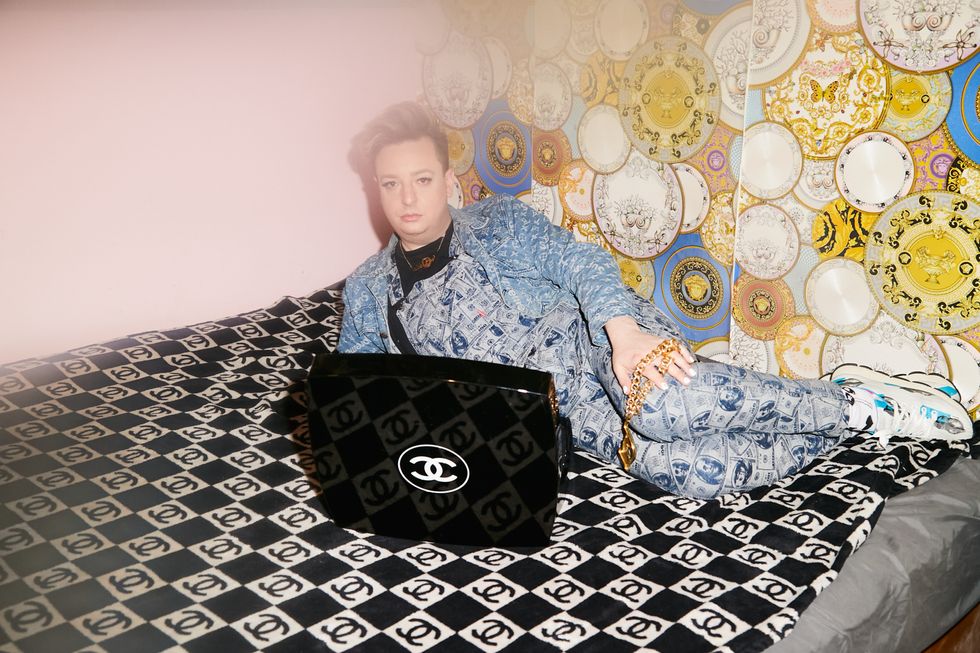 Held grew up in Brooklyn, where he likens his childhood to that of Jenny on Gossip Girl: surrounded by glitz and privilege, attending the elite Packer Collegiate Institute and feeling unable to compete. Lena Dunham was a childhood friend. His mother, a professor at a CUNY school in Brooklyn, didn't even match his school's tuition with her annual salary.

"I was the one growing up in the loft with artist parents and was quote unquote 'poor,'" he says. "I grew up shopping at thrift stores for clothes to wear, and around 5th grade I got interested in fashion and started what ultimately became this. I'd go to the flea market and see something that wasn't right for me, but I also couldn't leave it there."

Eventually, Held started selling clothes back to the girls at his school and his side hustle was born. In his teens, Held worked at the consignment store INA, and developed a taste for labels like Todd Oldham, Moschino and Versace. He enjoys the treasure hunt to this day: "When you find an Issey Miyake pleated shirt in a rack of H&M sweaters, it's just a rush," Held adds. 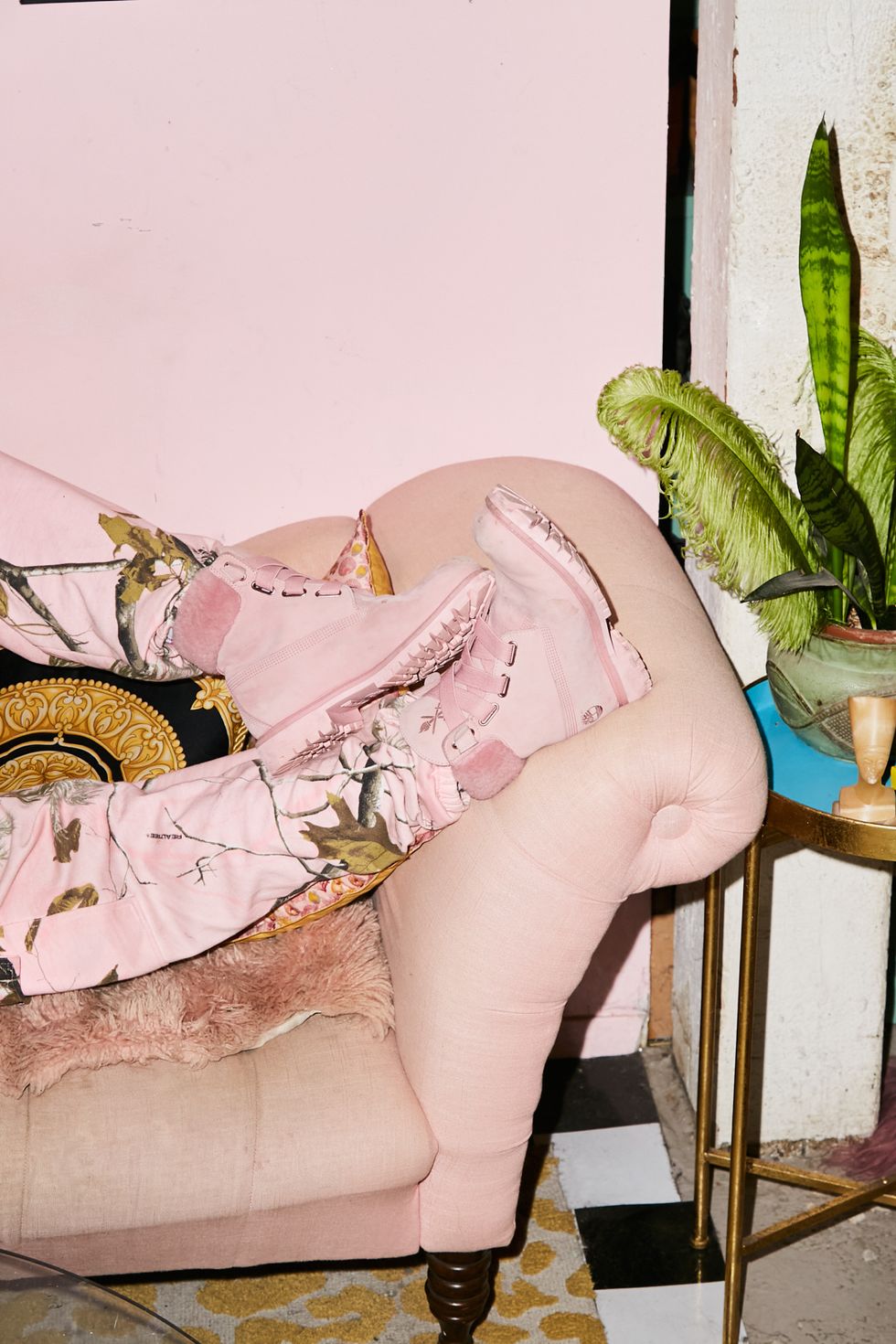 Thumbing through racks in his studio, Held pulls everything from vintage Moschino to a newly acquired Todd Oldham blazer from the '90s that Tyra Banks wore on the runway. "Those are my crown jewels," he says. "I have things from runway shows that were so iconic where Kevin Aucoin did the makeup or Orlando Pita did the hair, and it was always Naomi and Kate and Cindy or Helena," he says.

This is how conversation flows with Held, who goes from detailing the history behind any one of his garments to dishing fun facts. In college, for example, he dedicated part of his senior thesis to Beyoncé. "I took every instance of her doing her hair flips and put it into a sequence I could do in real time, and then I performed it with a weave and without a weave in a side-by-side," he says. "It was totally different because the hair flip is what they call a legible gesture because it affects the flip of hair, but when you do it without the hair you're just a crazy person shaking your head around."

Related | Baby Phat Is Back for a New Generation

For Held, fashion and pop culture are intertwined. He famously dressed Kim Kardashian in a vintage Dior "rasta" bikini on a beach in Mexico circa 2017, and created one of Rihanna's music video looks for the 2018 summer anthem, "Wild Thoughts." That sheer pink peasant blouse, a Betsey Johnson dress Held cut into a crop top, stuns in the video's opening scene. Page Six even reported that Held once sold his extensive Baby Phat archive to Rihanna. Held clarifies that the report was only partly true. "I'll tell you what happened there," he says, revealing that he only sold RiRi "15-20 pieces," which made up most of his collection at the time. Since working on a few projects with the recently resurrected Baby Phat, however, Held has been collecting a lot more of the mid-2000s loungewear staple. He even styled daughters Ming and Aoki Lee Simmons for the brand's relaunch campaign, shot by Oscar Ouk. 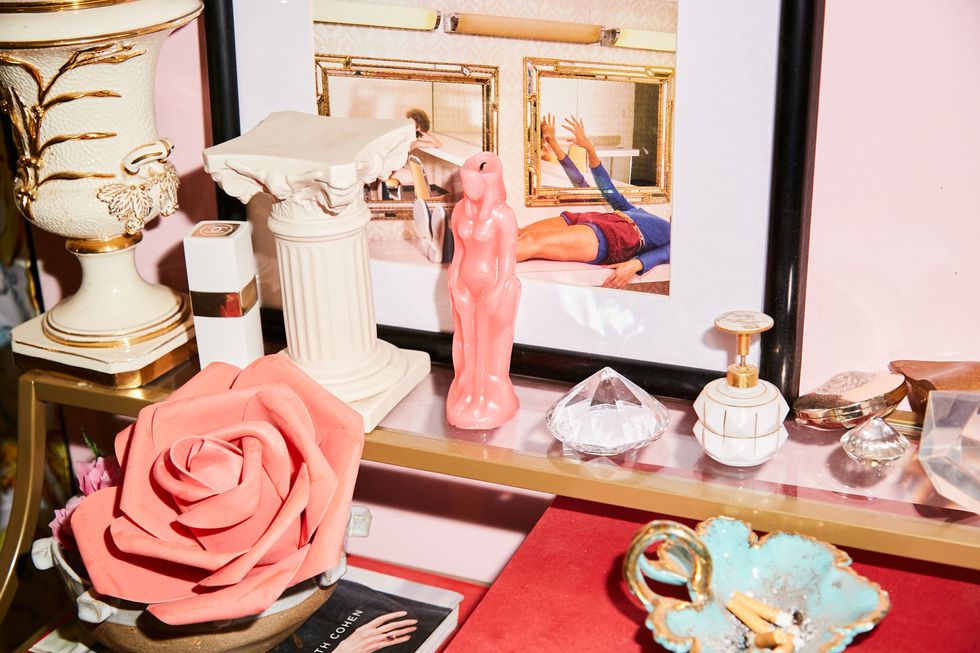 While Held has always been nostalgic about fashion, today's current resurgence of that early-aughts, blinged-out aesthetic is especially good for his business. With the exception of a small assortment, the majority of the clothes Held owns are exclusively available for loan. "There's power in having a collection and if you are selling everything you can't have that," he says, before disappearing to change from sweatpants into a pair of Jeremy Scott for Adidas trousers printed with the designer's face. Held has another client on the way to pull clothes for an upcoming shoot, and she's bringing a photographer for her own magazine feature.

When Chloe Chaidez of Nasty Cherry and Kitten arrives at the loft, it's officially playtime. She and Held have only been recently working together, but they get on like old friends. Within minutes, Chaidez lights one of Gabriel's American Spirits and begins stepping out of her red python pants and oversized parka into a vintage patchwork dress from Patricia Field. She looks every bit the rockstar in the backless halter, but is already eyeing a yellow plaid maxi skirt with a matching bandeau top that Held brings over. Next up, she's in a tight minidress with a massive Budweiser logo down the front, and Held re-emerges with an over-the-knee boot. "These are Shayne Oliver for Diesel," he says.

Watching Held work helps clarify his process. There's something refreshingly old school and authentic about the way he forms relationships with clients, making the experience of pulling looks and styling them feel more like entertainment — not business. Held disappears into his racks and returns with another handful of looks for Chaidez. There's a punky plaid skirt with matching corset, a quilted Moschino leather jacket from the '90s and some high-heeled mules for effect. 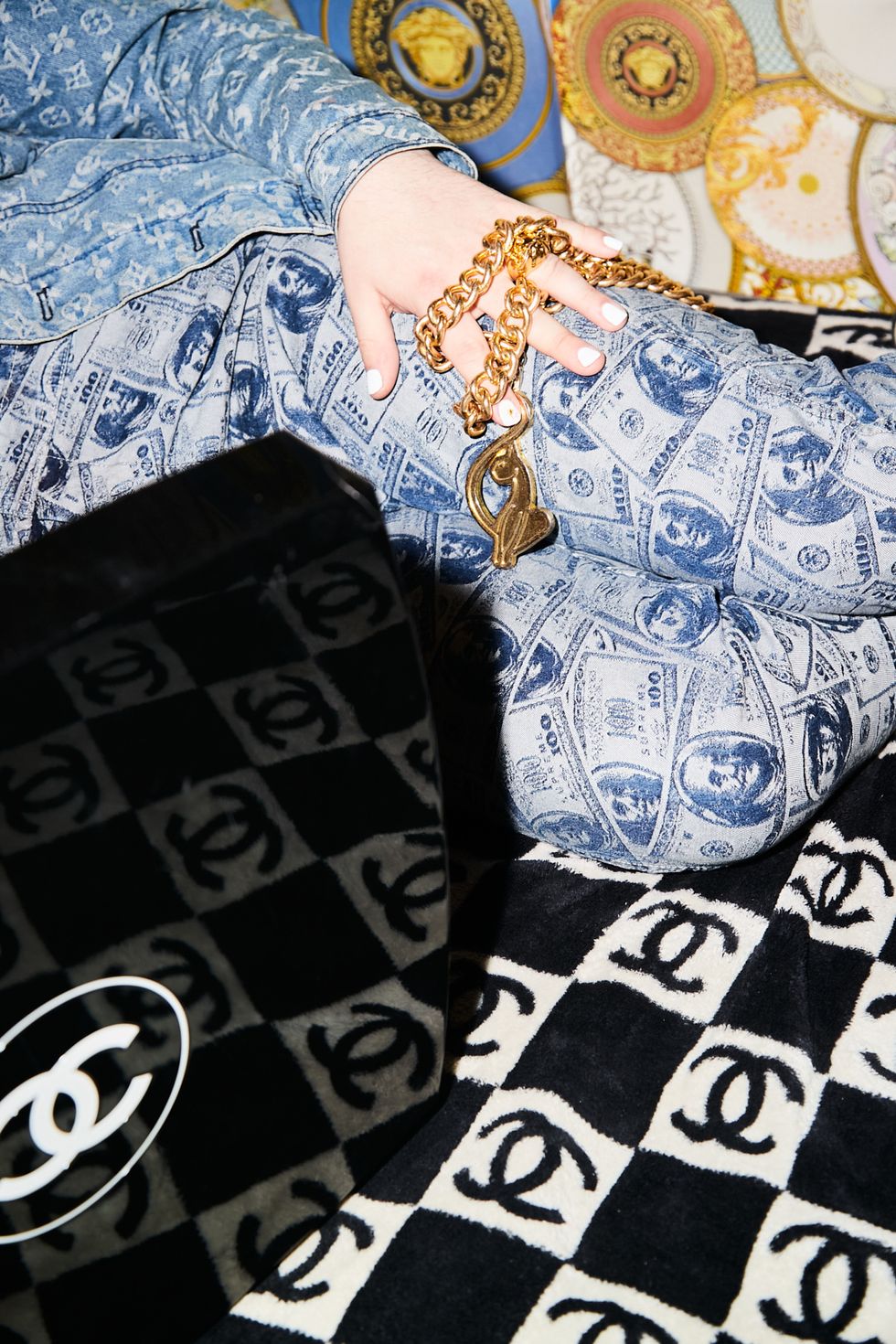 Chaidez and Held share a hairdresser, Starlina, who arrives to prep Held for a Susanne Bartsch party where he'll be going dressed as Jennifer Coolidge's Legally Blonde character, Paulette. Starlina unrolls a velvet case with her assortment of shears and begins slashing a blonde wig with ease. Tossing it on with the signature blue scrunchie intact, Held clears his throat and recites the line, "You look like the Fourth of July. Makes me want a hot dog real bad." His Paulette impression is uncanny.

Held's next appointment arrives at the door soon after: art director and stylist, Jeffery C. Williams is stopping by to pull some looks for Lion Babe. "Whenever I come to Gabriel it's always light and easy," Williams says. "We're friendly and both from the same tribe." Not to mention, he loves that it's the only studio where you can freely smoke inside.

This combination of fun, fabulous clothes, and collaborating like friends encapsulates Held's entire approach. It's no secret that the fashion business can be latent with shady politics and mean-spiritedness, but at Gabriel Held's Studio, his attitude is the exact opposite. "Some people... how do I wanna put this?" Held begins, ruminating a bit before chuckling, "Are still living in a 2008 world where being bitchy is cool." 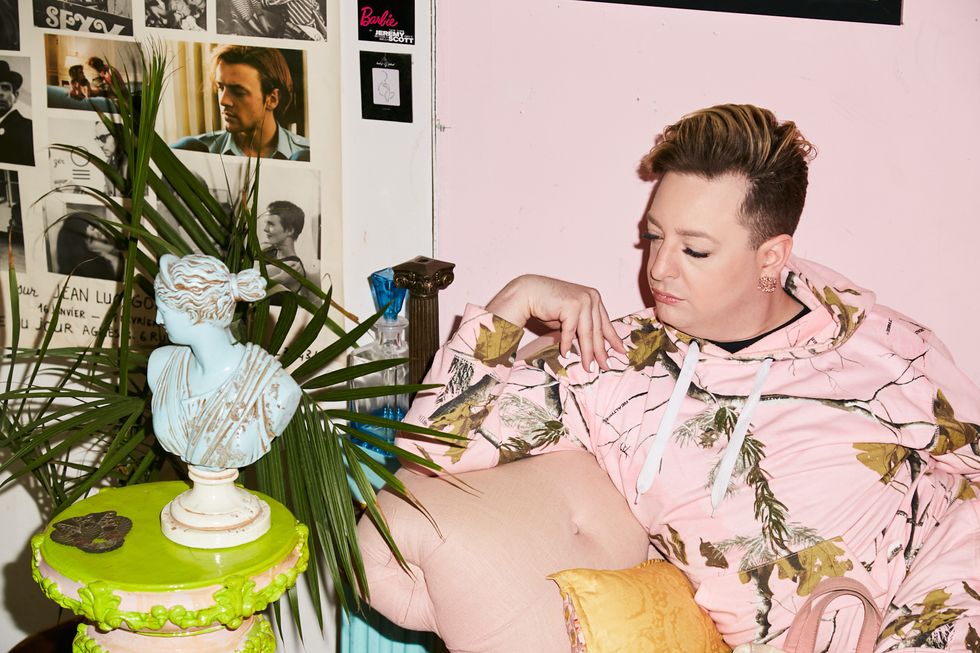