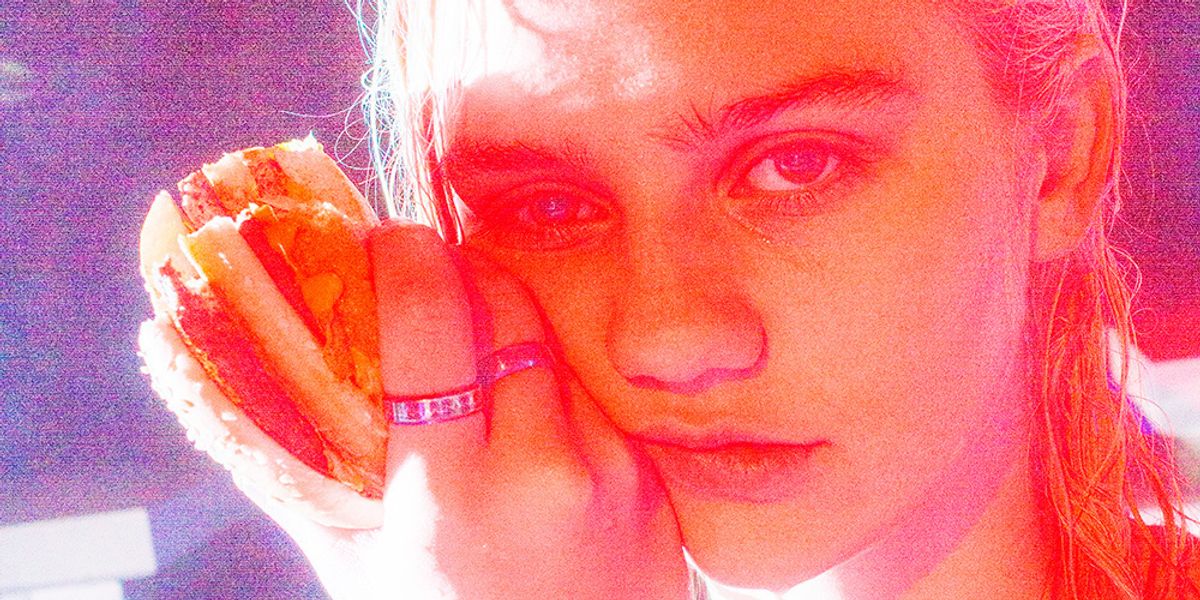 Carlie Hanson is a charming Wisconsin teen who makes music about her lived experiences. Not sold yet? Press play. It's explicitly honest and shapeshifting pop for your nerves. "Mood" is her latest single, and it pays homage to a very millennial type of wasted youth and love, while also sounding like something that would be right at home with the music of '90s bubblegum-pop revivalists like LIZ. "I really don't care if we're doing nothing/ I really don't care, you know I fuckin' love it," Hansong sings, lyrics co-written by Leland. "Mood" is a song about enjoying the company you keep, even if it's passing the time getting late-night food, drinking, or chilling in the jacuzzi. Which, let's just claim this now: highly relatable content. What really sells this though? Hanson's pop-starlet positioning and light R&B vocal affectations show that she writes songs that are not only culled from personal experience, but smart enough to appeal to listeners who know and love pop for its range and influence on culture. "Mood" is a mood, a luxury, and a lifestyle. You'd be wise to get into it.

You might remember Diana Gordon as Wynter Gordon, a singer-songwriter who has often collaborated with Beyonce. Vocally, she's got the soulful, throaty grit of a punk storyteller, and musically, she makes evolved folktronica R&B with hi-hats. "Kool Aid" is the latest from Gordon, and its lyrics pack a punch more powerful than the sugar rush you get from drinking it. "Don't forget your family, Don't forget your name," she sings, "One of these days you'll be missing the Kool Aid/ When you're feeling all alone, run home to me." "Kool Aid" effectively captures a feeling of nostalgia that is universal, whether reflecting on bittersweet childhood memories — in fact, the "I'll be right here" coda feels like a loving inner-child pep talk — or a former romance for whom the feelings still burn brightly, or a friendship you might long to reconnect to. Overall, it's a bop that will stick to your ribs, much like the sticky-sweet substance it promotes.

Who knew faking it could sound this good? PAPER caught up with Jesse Saint John the other day, but we can't get enough of his new song "Fake It." That fresh-as-hell vocoder "fake it until we feel it" refrain, plus hooks that don't quit, plus bombastic '80s production, with some Yeezus-style electronic buzzsaws, make this compulsively replayable. But you come for that and you stay for the message underneath. The songwriter says "Fake It" is actually about distance of the new millennium: how we are all supposedly more connected than ever through technology and still so separated. "I deal with deep sadness and there's this sort of mantra like if you pretend to be happy you eventually convince yourself that you are," Saint John confesses. That kind of raw honesty is rare in pop these days, which is why we're glad Jesse Saint John is here to stay.

We can admit that we are excited Uffie is back — with resounding glee, in fact. We can also admit that one of Uffie's greatest strengths is that she isn't too interested in reinvent the wheel of dance music, as much as she explores her sound within its construction. Case in point: the newest collaboration between Galantis and our beloved Uff, "Spaceship." She has a simple hook: "You've got the kind of love that's taking me new places," and it's paired with a shapeshifting robo-beat. What really sells this is Uffie's left-of-center smart-pop sensibility. Working with the framework Galantis produces, Uffie alternates from cheerleader to deliriously-in-love hanger-on to Martian robo-queen. And like every Uffie production, the simplicity of "Spaceship" is bait for deeper deception: inevitably, eventually, you'll get hooked, and Uffie will just shrug like making hits is the most natural thing in the world. That might be true except for the fact that no one does what Uffie can do.

"Sweaty," "sexual," and "tough" are three words French singer, songwriter, and producer Héloïse Letissier has used in recent interviews to describe her new sound of her musical project, Christine and the Queens. Boasting a funky bassline and disco sensibility, "Girlfriend," her first offering since her incredible 2015 debut full-length, is not only endlessly danceable, but her stuttering vocal cadence recalls the very best of Michael Jackson. And the hook is everything. But with Letissier's music, nuance is her greatest calling card. "Girlfriend" carries an undercurrent of sexual politics that brings it right to the now: "Boys loading their arms, girls gasp with envy / For whom are the mimicking endlessly," Letissier sings. Sentiments like these, paired with a breezy and poised vocal performance by Dam-Funk elevate this song to the next level. But it's the thrilling ending: a prog-pop synth explosion no one saw coming that makes "Girlfriend" a song you'll want to replay, for like, the rest of the weekend, and beyond.

As written yesterday, the Backstreet Boys are forever. "Don't Go Breaking My Heart" is peak BSB and perhaps not on accident, sounds like it could've come out in the early aughts and still hit. That means something about this track, which features the original lineup crooning over a beat that is 2018 meets pop's best tropes (the bombastic drum-heavy production and the sticky, soaring refrain has me dreaming up full-out boy-band choreography whether I want to or not) — is not necessarily time-stamped. In the case of the enduring BSB, and their fans who've grown up with them, it's a really good thing.

Related | The Backstreet Boys are Forever

Vocally speaking, Demi Lovato does not play, as we all know, and the undisputed Fierce Lioness of Gale-Force Power is back only two days after slaying us in the world's most secular church with fellow hollering soul banshee, Christina Aguilera. I'm going to have to hit up my favorite 14th Street wig shop again because my edges which were once secure have been ripped from thine scalp with a force I won't quickly recover from. All that said, Demi's latest collab with Clean Bandit really doesn't play either (that's a good thing, by the way), and apparently, she's not here to make friends. "Solo" is about going it alone in a sex type way, and though she's not rattling my bones with her aforementioned Gale-Force Power here, she is slaying me with these hooks. Too early to call, but we always accept submissions for song of the summer. It's just so damn catchy and maybe I'm a zombified pop slave, but even if your culinary tastes are sugar-free, who says you can't cheat once in a while and put your whole face in a bag of Domino sugar? Just listen, and listen again. You won't be able to stop.

If you've been paying attention, it's no surprise that we're big fans of Janine's blend of vulnerable songwriting and quiet-storm, '90s-indebted R&B, refreshed for a new generation. "Hold On" is the latest in a string of recent singles by the LA-based artist, and all of those songs will be on her debut album, 99, which is coming on May 25. We can hardly wait. Janine's music has always been effective in how easy it is to sing along to, but this one feels like a bid for radio that actually doesn't sacrifice what makes her sound so special. It's a decidedly more upbeat affair that will go well on a party-starter mix, which is nice because if you need something to cool you down or even put you in the mood, Janine's got songs for that, too. At this point, we ask ourselves: What can't she do?

This cute sonic flip of JD Salinger's classic novel comes from GRANT, a singer-songwriter who is already being touted as Sweden's next big thing. It's easy to see why, as "Catcher In the Rye" masters what the Swedes seem to do best: ultra-chic four-to-the-floor beats juxtaposed with confessional, but easy-to-swallow lyrics, and hooks on hooks on hooks, forever. This one is full out with feeling: a confident offering for the girls who dance alone, the boys who want to dance with them and every variation therein.

RUSSO is the name of Cailin Russo's (the daughter of Unwritten Law's Scott Russo) punky new band, but "Lonely" sounds like that band has definitely been around the block. It cannily toys with rockstar posturing (catch Russo's intermittent tigress growls), and flips it on its head with lyrics about undeniable sexual prowess coupled with cheeky references to Kanye's greatest hits. The beat and overall feel of "Lonely" is like a rollicking pep rally where the cheerleaders set fire to the bleachers once the onlookers leave, or like every road trip you've ever taken where you get pulled over for speeding and flirt with the officer. No? Just me? Regardless, the point is this is exciting stuff, and RUSSO is certainly a leading act you won't want to miss.