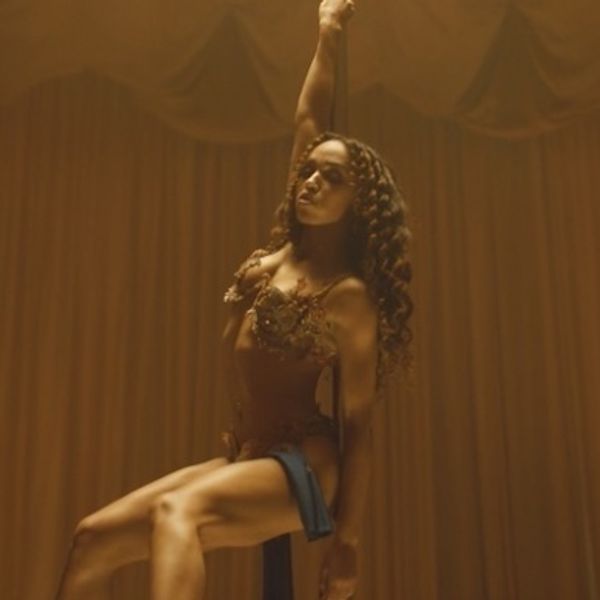 As if FKA Twigs fans weren't already anxious enough about the promise of new music and an intimate, limited-run tour after the release of her new single "Cellophane," the singer just dropped some sick merch.

Inspired by the now-viral visuals from her first solo music video in three years, the pricey tees and hoodie are twisted trips through "Cellophane" land. The music video for "Cellophane" was not only dazzling in its color palette and visual effects, but also in Twigs' pole dancing skills.

In the video, she contorts her body carefully to the painfully emotional slide of each note, offsetting the tempo of the modern electro ballad. She eventually emerges in a warmly lit, cloudy atmosphere and comes face-to-face with a winged, multi-faced cyborg sphinx.

Her new merch features this creature heavily; the most expensive tee of the bunch, retailing for $84.58, displays an all-over gradient print of the creature laying out majestically on the front. Another black tee features the creature's multiple faces, separated into harsh layers like some digi-steampunk mask. The cherry on top? A pair of wings spread out prominently on the back, seemingly attached to the wearer's shoulder blades. This particular shirt retails at a cool $39.04, the cheapest piece in the collection.

Related | The Future Is Here, and it's FKA Twigs

The coolest piece of merch from the drop, however, has to be the long-sleeved "FKA" sphinx tail shirt, which features two dueling sphinx silhouettes on the sleeves, along with the back design from the other black shirt. It's perhaps the most understated of the merch, but surely the best grab at $58.55.

FKA twigs on Instagram: “lewk fly fly lewk FKA twigs lewks give u angel wings beautiful images illustrated by @andrewthomashuang designed by me and my loves…”

You can shop the full collection here ahead of FKA Twigs' upcoming Red Bull Music Festival New York performances on May 11 and 12.