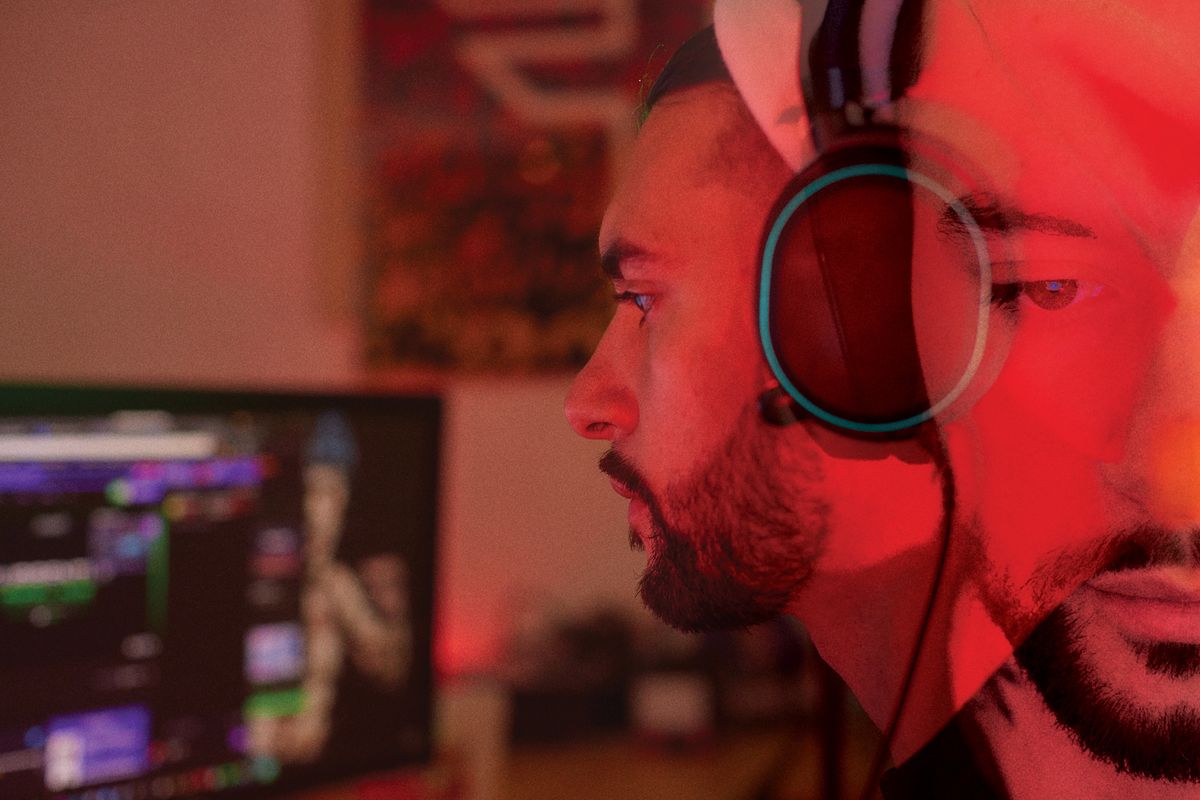 Inside the FaZe Fortnite Pros' Mansion

Up a steep drive in the Hollywood Hills sits a multistory mansion that stretches right up to the curb. It stands out from the neighboring houses in both size (it's so long that it wraps around a bend in the road) and stateliness (there are more balconies and glass panes than one could reasonably count). Inside, the spread is a cross between an opulent music-video set (think Lady Gaga's "Poker Face") and a Vegas nightclub. The winding staircases and hallways are backlit with neon. The uppermost deck has a pool and overlooks the lights of Los Angeles below. Oh, and there's an elevator.

Homes like this aren't exactly unheard of in Hollywood. But this isn't a celebrity's home.

Well, not that kind of celebrity.

This fever dream of a home serves as the headquarters for professional video game players. FaZe Clan, to be exact. Founded in 2010 by three gamers — known by their tags, Housecat, Resistance and ClipZ — FaZe Clan is a collection of nearly 60 professional competitive gamers and video content creators. Within FaZe are sub-teams that specialize in certain games and compete in game tournaments for prize money — often six-digit sums. As with nearly all competitive gamers and gaming personalities, FaZe members range in age from late teens to late 20s. Their house is luxurious, of course, but is kept very much in the way you might expect from a dozen or so 20-somethings — furniture arranged more for utility than aesthetics, bright comic-style art and traces of past gags and pranks if you squint hard enough (no doubt kept modestly in check by a regular cleaning service).

The rise of teams like FaZe Clan has coincided with increasing numbers of fans and players heading to YouTube and Twitch, an online video platform where an audience that currently numbers 15 million daily viewers can watch more than 2 million streams of live gameplay. Multiplayer titles like StarCraft, League of Legends, Call of Duty, Counter-Strike and, more recently, PlayerUnknown's Battlegrounds (PUBG) and Fortnite have become particular favorites among Twitch viewers, spawning much greater interest in live gaming tournaments, as well as the players who compete in them. With revenue from global esports projected to hit $1.1 billion in 2019, these teams have also started attracting impressive corporate sponsorships from brands like T-Mobile and Mountain Dew and launching merchandise to better engage with fans.

Games like Fortnite have even attracted the attention of mainstream celebs like Drake, which has propelled gaming to new levels of popularity. And an ad last fall for Samsung Galaxy reveals a growing fusion between what might have formerly been considered separate realms of pop culture: music and gaming. The ad features a mother and her game-addicted daughter and, as it progresses, includes cameos by rapper Travis Scott and a lanky, green-haired figure whom the mom calls Ninja, like we should all know who he is.

Ninja is one of the most popular game streamers today. For perspective, while Travis Scott can currently boast about 5 million YouTube subscribers, Ninja has just shy of 22 million. With numbers like these, it's hard to argue that personalities like Ninja aren't huge stars. And with big fame comes a great deal of opportunities not necessarily tied to gaming. Brand endorsements, public appearances and merchandising have quickly scaled up to match the profitability of top gamers. Of course, games are still the backbone of this popularity, but it is increasingly clear that the non-gaming aspects of game culture are beginning to play a much larger role in the community, much as TV rights, merchandising and licensing are huge moneymakers for traditional sports leagues.

Two of the earliest FaZe Clan members, Alex Pinkevich (FaZe Adapt) and Frazier Khattri (FaZe Kay), live in the Hollywood Hills mansion and focus more on producing non-competitive content, such as in-game trickshot videos, vlog entries and comedy sketches, along with lifestyle branding. It's this dedication to content where FaZe really sets itself apart from other pro gaming teams. Pinkevich and Khattri's YouTube channels are immensely popular, with around 5.2 million and 2.2 million subscribers, respectively. A newer member, FaZe Tfue, has over 10 million — double that of Kanye. These stars often cross-promote and collaborate on projects with other FaZe members, such as spinoffs into other market segments like streetwear lines, music and modeling.

As they describe it, FaZe Clan itself operates as a network — an umbrella for individual talent to connect to a common audience. Pinkevich remarked that this network structure grows the popularity of both the team and the individual player dynamically: "It works both ways: It doesn't just help the individual, but the individual will help the brand. Like how we picked up Tfue — he's the best Fortnite player. Him being FaZe Tfue really established FaZe on the scene in Fortnite, but also it gave him a bigger dedicated audience to tap into, people that are already fans of FaZe and its history."

Pinkevich and Khattri said they work on their YouTube videos and brand consistently, every single day, and put in much more work than one might associate with video game streaming. Even if they're making a simple trickshot video, a great deal of practice goes into perfecting the trick technique, and then they have to film, edit and curate to ensure the video is smooth and consistent with their other content. (Sleepless nights are doubtless made easier by the team's energy drink brand sponsor, G Fuel.) In other words, it's not all off-the-cuff, unedited jokes streamed live. As Khattri notes, "From the perspective of somebody watching us, playing games looks like a dream job. And obviously it's an insane blessing, but to be able to have it you've still got to put in the work every day."

In addition to putting out regular (often daily) content and closely curating their videos for message and style, these content creators are also keenly mindful of their audience. Pinkevich explains that for FaZe Clan content, "We always keep in mind that we have young kids watching us, and we influence them heavily. So we have to be aware of what we do or what we post, and don't do the wrong thing or post the wrong thing. We're always conscious of that. We're not trying to influence our young audience in any kind of negative way whatsoever." Nor are they ignorant of the scale of their popularity. "We recognize that we're modern-day stars for young kids, as I had when I was growing up, like when I looked up to TV stars," says Khattri. "Nowadays kids don't watch TV. They watch YouTube."

Revenue from global esports is projected to hit $1.1 billion in 2019.

While FaZe Clan members like Pinkevich and Khattri work diligently to nail a video, their teammates may spend their days training to perfect competitive game strategies as well as streaming for fans. Co-living and in-house training situations like FaZe Clan's in Hollywood are a common feature of the team esports world, because players can more easily train with one another using LAN connections (local area network, a direct connection that bypasses the all-too-frustrating issue of lag in Internet-based play).

These houses, though, aren't necessarily the best environment for every member, and many competitive players live and practice off-site. One such member, Dillon Price, aka FaZe Attach, competes regularly as part of FaZe's competitive Call of Duty team. As Price describes, a typical day for him might consist of streaming for fans for two or three hours in the morning, training for six or seven hours in the afternoon with his teammates (some of whom are located in other states) and then several more hours of streaming at night. When new titles are released — as with the newest Call of Duty title, Black Ops 4 — popular streamers tend to pour more time into showcasing features of the new release for their subscribers and building strategies for later competitive play. Because streaming also provides revenue for players, by way of advertisements, subscriptions and viewer donations, 24-hour streaming marathons have become common, pushing players to their physical limits.

On YouTube, FaZe Tfue has twice as many subscribers as Kanye.

The balance between how much gameplay to show off and how much strategy to conceal is a delicate one for streamers, however. Perhaps more acutely than traditional athletes, pro gamers must wrestle with the conflicting demands of competitive secrecy and visibility, playing a dual role that The New York Times recently described as "half athlete, half influencer." Regarding some of the unique challenges of this kind of fame, Price explained, "When your team has an advantage in the game, you don't want to stream and give that away. You could stream and grow your brand, but you could potentially lose thousands of dollars if you teach other teams how to play. You always have to weigh the pros and cons: Is it worth it to stream? How much will your brand grow if you stream? How much money will you make if you stream? Or does it even come close to how much you'll win potentially at a tournament if you keep an advantage?"

There are other, more existential anxieties that pro gamers like Price have to deal with. Like professional athletes or fashion models, there is often an age limit to the profession, which Price ruefully sets at "around 28 to 30 years old." He adds, "You have to move on to something and find your next passion." Even for tournament-focused gamers like him, branding — and by extension, career diversity — seems to be key to the next phase of gaming.

Price then summarizes what he sees as a divergence in attitudes among current esports players, mindful of which track he thinks is best for him: "I could do nothing and still be able to make a good living and just chill, but I feel like I'd rather work hard and have something come of it. Any pro player can just sit around and game and make a decent living, but if you grow your brand, you can become huge and you might have a whole other career path ahead of you... And I think a lot of [pro players] who aren't doing it — the streaming and YouTube — are going to regret it when they're older."