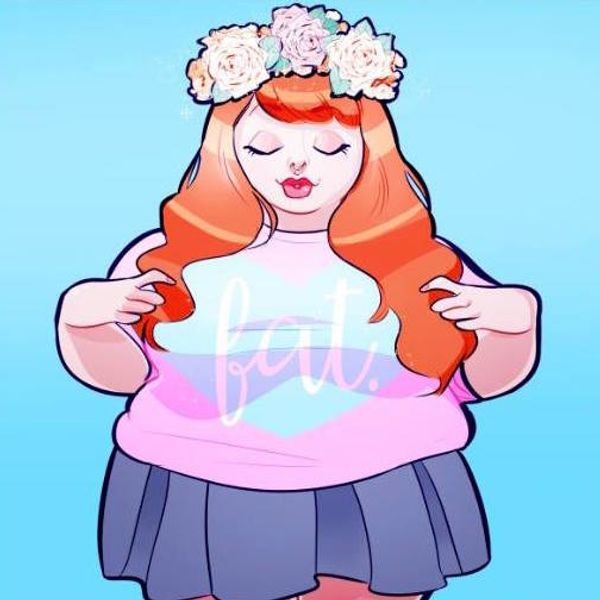 Fat and All That: @yrfatfriend Is the Fat Activist You Need to Follow

Fat and All That is a weekly column by Editorial Director Mickey Boardman in which he discusses his lifelong battle with weight issues and society's views on overweight people. He'll discuss fat-shaming, body positivity and everything in-between, while also taking us on his current journey to get healthy and find the ideal weight for himself.

Since I started writing Fat and All That and embarking on a life as a self-proclaimed fat activist, I've come across so many amazing people who have taught me tons about fatphobia and how we can fight it. One of the most inspiring has been the intentionally activist behind the popular account @yrfatfriend. Her Instagram feed is filled with incredible writings on fat-related topics and the results of surveys she gives her followers.

Actress/activist Jameela Jamil says, "@yrfatfriend is the person I've learned the most from about this entire community. Her intersectionality, her poise when dealing with trolls and her attention to fact when debating the issues of her community are what all activist writers should aspire towards. I look up to her a lot and promote her whenever/wherever I can because she's a voice we really need."

We caught up with her to learn about the incredible activist behind the (anonymous) Instagram page.

How did you become a fat activist?

A few years ago, I got into an argument with a good friend who's thin, and always has been. We both love and respect each other, but we just weren't seeing eye to eye, so I wrote her a letter. I was nervous that it might've been too harsh, so I sent it to another friend to read over. He asked me to post it online so he could share it, too, so I did. A week later, 40,000 people had read that letter. So I kept writing essays, and people kept reading.

Your Fat Friend 🏳️‍🌈 on Instagram: “This goes for ANY word a fat person uses to describe themself. In my experience, these well-intended-but-harmful objections come most…”

Tell me your thoughts on the word fat. I like to use it and so many people panic when they hear it and scramble for a euphemism.

I like it, too! But I definitely get that other people have strong reactions to it — they've spent a lifetime learning that fat is a terrible thing, and that using the word "fat" is always cruel. It makes sense that people would think of "fat" as a terrible word to use. But it's only cruel because of the assumptions we attach to it: that fat people are unattractive, unintelligent, unlovable, unhealthy, unworthy of respect. To me, fat is a neutral word. I'm fat. I'm also tall. I also have blonde hair. Those are all facts about me, and they're pretty boring at that.

The euphemisms are always so funny to me —"fluffy," "curvy," "big-boned." There's this assumption that I can't know that I'm fat. As if saying the word will make it appear. I'm not Beetlejuice. You can describe my body without dancing around it. I'm fat! It's fine!

Related | Fat and All That: Jameela Jamil Is Coming for Designers

Why are you anonymous online?

I'm a woman speaking up on the internet, so I get a lot of threats. Being anonymous is at least a speed bump for people to bring those threats to fruition.

What do you think the biggest obstacle we have as fat people in society today?

There are so, so many. It's perfectly legal to fire someone just because they're fat in 49 states. Juries are more likely to convict fat people than thin people, even with the same charges and evidence in front of them. Fat people who are the targets of sexual assault are less likely to be believed. There are so many issues that are so urgent.

For me personally, it's health care. I will never forget going in to see a doctor to get treatment for an ear infection, and having him prescribe weight loss as after care. But my inner ear didn't get fat, it just got infected. Another refused to treat me altogether. It's bizarre. I've had major health issues go undiagnosed and untreated for years because doctors would withhold health care until I lost weight. I've spent half my life on every weight loss program I can find, and I'm still fat, and I still need health care. Tending to my health is really, really important to me, and there are times when I can't, because doctors won't treat me. It's really scary.

Your Fat Friend 🏳️‍🌈 on Instagram: “Some questions for straight size people to sit with when engaging in conversations about anti-fatness and fat liberation. 💕 . Fellow fats:…”

I've recently lost about 50 pounds and everyone treats me like I won an Academy Award. I know they mean well, but what do you think is the best way to respond to these gushing compliments about how great I look or how proud I should be that I've lost this weight? (Meanwhile I'm still officially obese according to the BMI chart.)

It is the weirdest! I lost about 75 pounds a couple of years ago, after finally finding a doctor and getting to the root of some health issues. I'm still fat, too. Around that same time, I had a major, game-changing career accomplishment that I'd been working toward for years. Just after losing all that weight and seriously soaring in my day job, I went to a party. The host had told everyone there about me before I arrived, but the only thing he'd said was that I'd lost a ton of weight. It was the only thing anyone wanted to talk about all night. "What's your secret?" "I finally got health care!" It's just not that exciting.

Weight loss compliments are so tricky, because there's a social expectation that we have to compliment weight loss. At the same time, it also sends a message that our size is the most important, prized thing about each of us, and that's a line of thinking I don't really want to validate. My favorite way to respond to, "You look great!" is "Thanks, you do, too!" People who sincerely just mean "you look great" tend to take it in stride, and people who mean "you've lost weight" really get thrown for a loop. If someone gushes about weight loss explicitly, I usually say something like, "Wow, that really seems to matter to you," in a nonjudgmental way. It holds up a mirror for them. Is this really a value of yours? Or are you just saying it because you think it's what I want to hear? It gives both of us an out — I don't have to talk about weight loss, and they don't have to feel ashamed for doing what they've been told is the right thing.

"People of all sizes have major hurt that we carry around related to our size."

I know you've gotten a lot of hateful responses to your questions on Instagram stories from people claiming you glorify obesity or that body positivity is endangering the health of fat people. Why do you think people are so obsessed with that wrong way of thinking?

It's so strange, isn't it? Most of my work focuses on empathy: asking people who aren't fat to consider how it might feel to move through the world as a fat person, to ask your fatter friends how they're doing, and to show up to support them, even when their experience is different from your own. And so many people are deeply upset by that set of questions. Somehow, just asking fat people how we feel turns into glorifying obesity. It's so strange.

I don't know if there's a single cause of it all, since it's just everywhere. People of all sizes have major hurt that we carry around related to our size — wishing we were thinner, more muscular, and so forth. The "obesity epidemic" is on the news almost every night. New miracle diets are on the cover of magazines every week. The Biggest Loser is this hit show that consists mostly of watching thin people yell at and shame fat people. We're inundated with messages that tell us fat people are duty-bound to be ashamed of our bodies, and that we should publicly perform that shame. And we're also inundated by messages telling us that being cruel and judgmental toward fat people is just "tough love" and it's somehow in the service of fat people. It's really hard for people to break out of those scripts. So even gentle suggestions— like "maybe your fat friend doesn't want to hear you talk about how terrible it would be to look like him" — are experienced as major transgressions.

Do you have other activists who you follow and inspire you?

Absolutely! Kivan Bay, Caleb Luna and Cat Pausé are all doing extraordinary work as fat scholars. Sonya Renee Taylor wrote a beautiful, challenging book called The Body Is Not An Apology. Haley Morris-Cafiero is a photographer who has a whole series of photos candidly capturing the way that people look at her when she walks down the street — it's so powerful. I could go on.

What can straight size people do to support their fat friends?

There are so many things, but the biggest thing is speaking up about anti-fatness. Very fat people like me — I'm 340 pounds — face constant bullying, harassment, and judgment from all sides. And the fatter you are, the worse it gets. I remember walking near my workplace a few years ago, in a crowded part of the city, and a stranger started shouting, "Excuse me, are you big enough yet? Is everyone else seeing how fat this bitch is? Look at her!" There were all these people around, and no one said anything. And that's usually how it goes: nobody says anything, nobody even checks in with the fat person who's being targeted. No one speaks up unless I do. The handful of times thinner friends have stood up and said something in moments like those, or even just checked in with me afterward, it has meant the world to me.