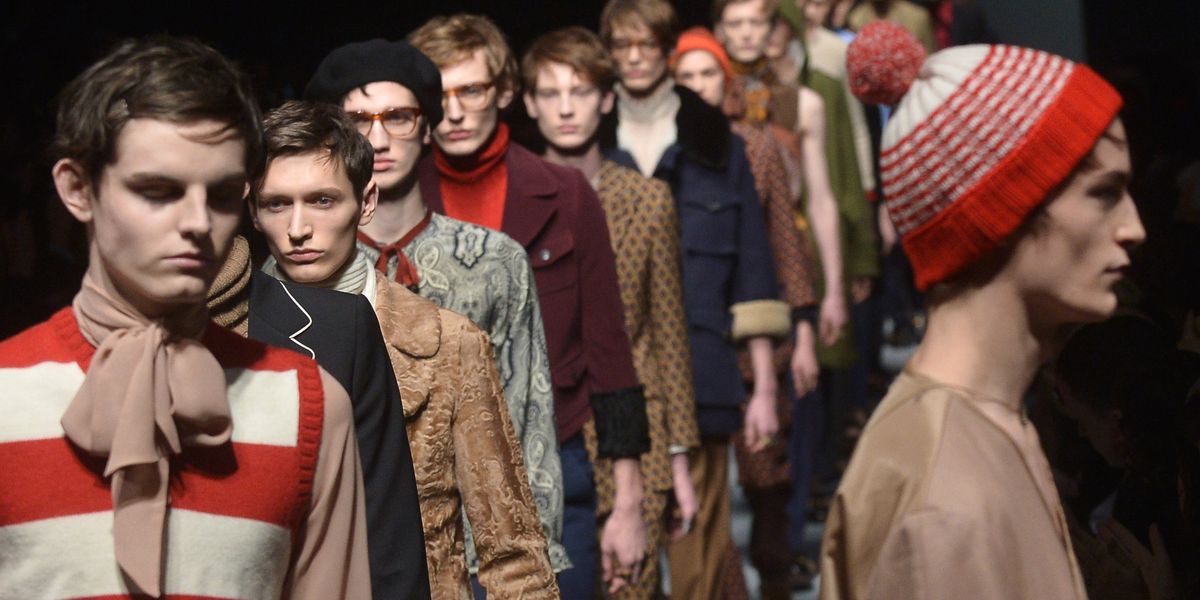 5 Things to Know About the Upcoming Fall 2020 Menswear Shows

The reality of a new year for fashion sets in right away the first week of January, thanks to the start of yet another round of menswear shows. This season kicks off once again in London, continues into Pitti Uomo in Florence, travels to Milan, and finally finishes in Paris. (Though the Haute Couture schedule begins right after the last leg of men's shows — no rest for the weary!)

But with awards season also underway (the Golden Globes are held this Sunday during LFW: Men's), it seems like fashion is all over the place this month. So here's everything you need to expect from the upcoming Fall 2020 shows, which begin January 4 and end January 19.

Versace and Celine Are Both Out

Versace and Celine, two of the biggest draws on the menswear calendar, are both sitting out the shows this season, opting instead for a coed format during the women's fashion weeks this February in Milan and Paris, respectively. "This is an experiment that for the moment is limited to 2020," said Donatella Versace at the time of the announcement. "The decision was made to highlight how the collections for men and women are using the same language and aesthetic."

Meanwhile, after two seasons of holding separate men's shows last year, Celine will also present its men's collection in a coed format on the women's schedule next month. Per WWD, the decision was made to reflect the gender-fluid aesthetic of Creative Director Hedi Slimane, but the brand did not rule out holding a men's show again next season.

London is known for cultivating home-grown talent, whether it's through young designer incubators or big splashy awards and funding. Three of the city's rising names are coming off a milestone 2019, and people will be paying close attention this season: Bethany Williams was recently honored with the Fashion Award for British Emerging Talent in Menswear, while Grace Wales Bonner and Samuel Ross of A-COLD-WALL* both won the BFC/Vogue Designer Fashion Fund and BFC/GQ Designer Menswear Fund, respectively. Ross will be moving his show Milan this season, though he will still hold a special installation in London.

Pitti Uomo, the men's trade show in Florence known for their dandy peacock attendees, invites special names from other cities to show their collections there each season. This time around, the three guest designers are Telfar, Jil Sander and Stefano Pilati's Random Identities. This marks Telfar Clemens' second international show, following his last collection held during Paris Fashion Week. The three designers join a list of past special guests like Givenchy, Craig Green and Y/Project.

Meanwhile, Brioni will be celebrating its 75th year at Pitti with a special event curated by fashion historian Olivier Saillard, that will show the brand's fall collection through the lens of its history. Outerwear brand Woolrich is turning 120 this year, and plans to create a "multifaceted universe" while debuting its Arctic Capsule collection.

Gucci Returns to the Menswear Calendar

Gucci was without a doubt one of the biggest losses to the menswear calendar when the company announced in 2016 it would start holding coed shows. But now the brand is back, and it will close out the men's shows on the final day of the Milan schedule. (Alessandro Michele's debut show for Gucci was the Fall 2015 men's collection, which reportedly was designed at the last minute and instantly signaled a new era for the luxury brand.)

Meanwhile, Milan is seeing the return of other brands like Prada, who skipped the schedule last season to show in Shanghai, and Ferragamo and MSGM, who both staged their last men's shows at Pitti Uomo. And Dsquared2 plans to show their 25th anniversary show as well as a giant afterparty.

Paris continues to be the most important stop on the menswear calendar, with fashion giants like Dior Men under Kim Jones and Virgil Abloh's Louis Vuitton among the biggest draws again this season. Some of the returning names are Simon Port Jacquemus, who we have not seen in action since his 10th anniversary runway show in the lavender fields of southern France in June, and Clare Waight Keller, who showed in Florence last season.

Other new names joining the Paris menswear calendar this season are Craig Green, who usually shows in London; LA-based label Rhude; and Rushemy Botter and Lisi Herrebrugh, the creative directors of Nina Ricci who will present their first collection for their menswear brand Botter on the official schedule.