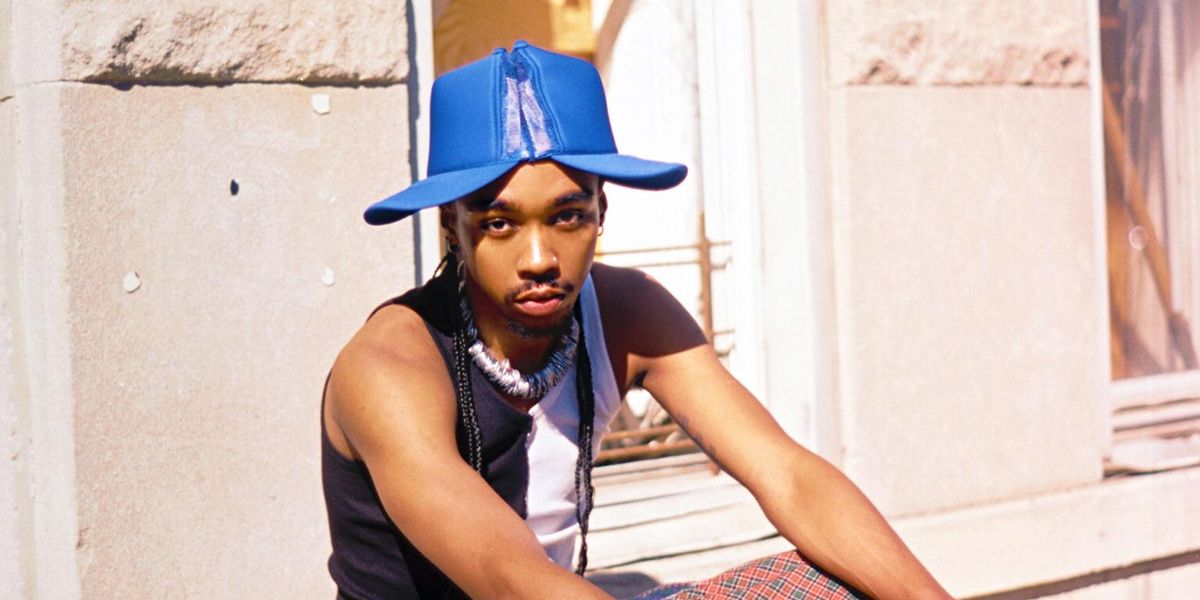 DJ Chapel's design approach is all about the why not's and what if's of fashion.

Through his independent NYC brand Duality Junkie, Chapel has introduced internet-friendly styles that abandon preexisting rules in order to transform — and subvert — everyday staples that we're all familiar with.

Why are trucker hats only sold with one brim, not two? What if your classic white tee stayed wrinkly throughout the day? Soda can tabs could become jewelry and plaid boxers could become prairie skirts. Maybe they even should?

"I'm taking things that everyone has a relationship with and manipulating its intention," Chapel says, underscoring his playful, nostalgic practice. "Like it's a fucking lace front wig; why doesn't it have pair of shoe laces tied up at the part?"

Below, PAPER talks with Chapel about the "spiraling intersection between reality and fantasy" that informs the design dimension he calls "duality."

How has your background informed the work you create today?

I grew up studying almost every art form, but was motivated to be a triple threat theater kid. After dropping out of Point Park University (PPU) dance conservatory, I needed to find movement outlets to fulfil my body's craving. Playing dress up became a muscle memory; it became a part of my daily routine. Duality Junkie is the world I've created to reminisce on my childhood nostalgia. It motivates me to feel comfortable in unfamiliar environments, so I share that healing power with others. I remember wanting to grow up so bad; now that I'm a little older, all I want to do is find ways to sustain my youth. The industry is too serious for me, it doesn't look like anyone is having fun. I provoke my audience to indulge in their innocence and explore how wearing a boxing glove go-go boot makes you feel empowered.

"I'm taking things that everyone has a relationship with and manipulating its intention."

At what point did you decide you wanted to launch your own brand?

When I got my own room in Brooklyn and I had space to create. Growing up sharing a room with my two brothers, I was limited to how far I could go with creative expression. Having walls to reflect my interest, I slowly curated the world I now call Duality Junkie. I would make a look, run up to the roof, play some music and investigate the character I've transformed into. That eventually evolved into dressing friends in my garments and creating sets for us to document them in. I wanted to share the fun we were having from playing dress up with more people. Designing is only a fraction of the brand.

How do you approach design? Is it fair to suggest there's a level of humor involved?

An item of clothing can really affect my mood, so when I'm designing I'm studying the garment's influence. I be feeling like a mad scientist with controlled experiments and lab rats. I heavily rely on getting in a playful and relaxed frame of mind. I have a hard time making decisions; I see everything through a double lens. When I start working on a design that I've sketched probably a thousand times, I'll have it 69% done when I start to morph it. I'll take the garment in its pieces and play with its possibilities. I can't say it enough when I say I am playing. I'm taking things that everyone has a relationship with and manipulating its intention. Like it's a fucking lace front wig; why doesn't it have pair of shoe laces tied up at the part? Even when I'm in production and I have to sew a dozen hats and four skirts, I legit dance through the entire work day. If I'm not having fun, I don't want to do it; the quality of the work goes down when I'm not enjoying myself.

"I could care less what people think about me or my work."

Do you consider virality and the internet when you develop ideas?

I say I'm diagnosed with digital personality disorder; Duality Junkie is my computerized persona. Having a visual portfolio to use to reference myself is power. I could care less what people think about me or my work. As a businessman, I will say if people are attracted to something I'll find ways to desaturate the design so it's available for sale. I've also noticed that people aren't just interested in the art, but the artist too. My occasional clip of me spiraling in the studio defines the mood of my designs. We need to see more images of Black men enjoying themselves. Documentation is so important to me. I was able to confirm my identity through the few images of gay Black men I was exposed to as a baby gay. Most of those visuals being from the white man's perspective, I prioritize redirecting the stereotypes placed on gay Black men. I see things like clout, money and exposure as tools, so I'm just tryna fill up my tool box so I can build this house.

Who in the industry — or not — do you consider to be your biggest influences?

Now that I'm designing myself, I try not to look at other designers' work. I honestly only reflect on other young independent Black queer creatives grinding, right now. I know how hard it is out here, so I'm just learning lessons from my peers. I feel connected to Alexander McQueen and Shayne Oliver. I'm performance-oriented, so looking past the clothes the way they presented their worlds influenced me to combine my interest in dance, theater and fashion to build my own.

"We need to see more images of Black men enjoying themselves."

Duality. You know when you were a kid, and you would get dizzy and see two of everything? I look at everything with a dual perspective. I can never just do one thing at a time; I need to multitask when I'm working. I reintroduce myself to myself every morning; the hat is giving bipolar, tbh. A mentor of mine told me to make a bunch of shit and with time I'll catch up with my taste. When I got into my studio after a long day of work I would prioritize making one thing a day. I've never been into mass production, but I want an army of double brim truckers.

Is upcycling important to your practice?

My resourcefulness came from me refusing to let my income limit my design capability. I just use whatever is around me: if it's can tabs, an old shoe, wire hangers, a boxing glove, honestly anything highly reflective of the time. I'll find a way if not a few ways to manipulate it into something wearable. When I'm exploring a new material, I'm transported to when I was a kid watching the unconventional challenges on Project Runway. I enjoy building a relationship with an item. I feel like SpongeBob in that episode when he's afraid of being outside and makes friends with a penny, a used tissue and a chip in his living room. I see the can tabs as currency in the Duality Junkie world. I used to go on long walks in my childhood neighborhood, Lower East Side, and pick up all the can tabs I'd see on the floor. Repurposing items is like creating a new language for me to communicate with.

"Repurposing items is like creating a new language for me to communicate with."

How do you see your brand growing and developing into the future?

Growth looks like finishing my collection to continue documenting my relationship to space and time. Sometimes I feel congested, like I have so many ideas and want to do everything, but I've honestly been playing "Moment 4 Life" by Nicki Minaj every day. I used to think about the future too much, restricting me from enjoying the present. I've always wanted to own space, whether it be a retail store, public art studio space or just land. Expanding as an artist means taking up more space, so I've been applying to art residencies. I'd build an installation and curate an interactive performance with the space and funds granted. I want to start creating short films and animations for my designs to live in. I just want to keep having fun and keep studying. I eventually want to be an art teacher. I appreciate all my art teachers, no matter the relationship, I want to pass that knowledge on to the future artist. Dead ass sometimes I'm like I'm done with this tbh, I'm a Sagittarius I get bored so fast. I'm always finding new ways to express myself, lately I've been exploring rapping. Duality Junkie is the rock star, hero, princess and all the possibilities I dreamt of as a kid.