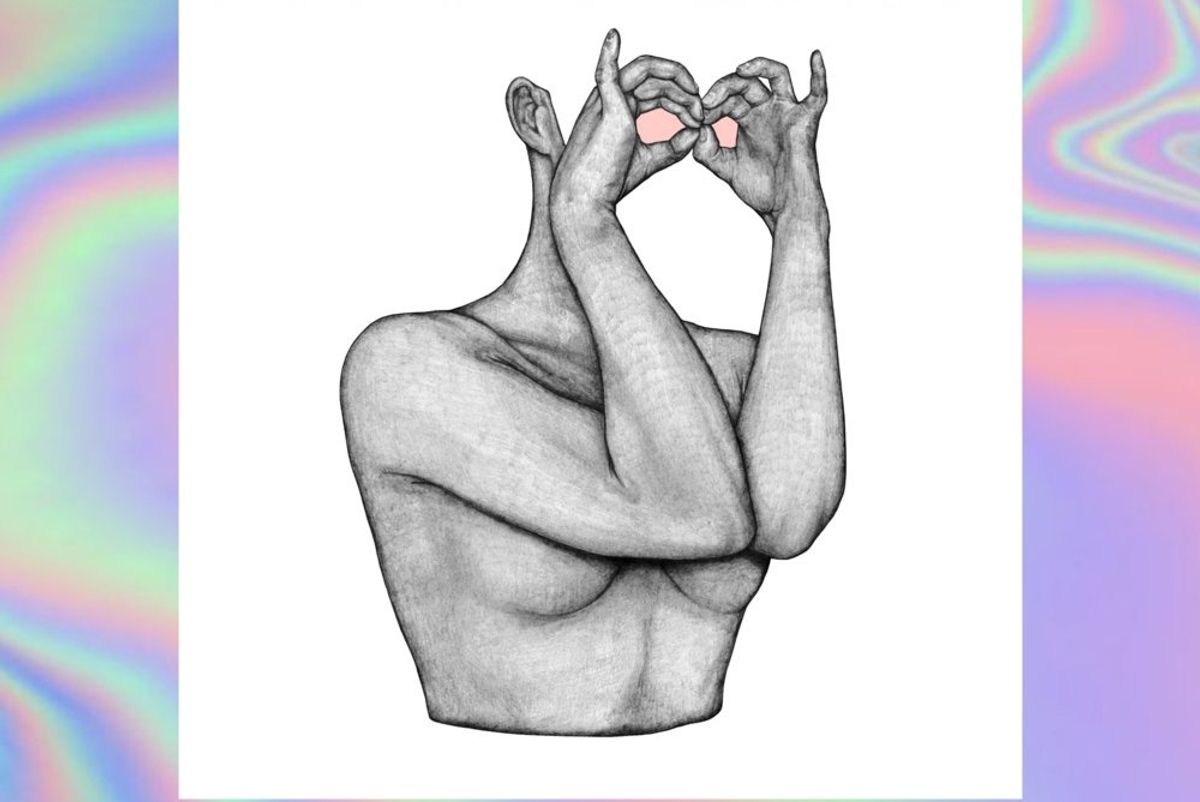 Katy Perry Accused of Stealing This Artist's Work Without Pay

After drawing attention to Perry's "Chained to the Rhythm" single art and merchandise (read more, below), the artist discovered that K-Pop group SF9 also used an image that looks like his own for their Breaking Sensation mini-album art. While the physical copy uses a real holographic surface, the digital version is stolen from Sebastian's 2012 Holographic Melt Series, the artist claims.

In addition to SF9, Sebastian has also alleged that more of his work is being used on another Capital Records band's site. Glass Animals, the indie-rock band from Oxford, has included Sebastian's art on their website without proper credit or compensation, he says. Sebastian's 2015 image, called Virtual Love, appears on an infinite scroll, as well as an image of pink liquid in a wine glass.

The Internet is a risky — at times dangerous — place for artists, with little to no protection over any creative that's uploaded online. Dom Sebastian, a London-based artist, is the latest victim to have his work lifted without any credit or compensation from a force much bigger than his online following (22.6k on Instagram).

Sebastian has accused Katy Perry and her label Capital Records of using his art without permission for her "Chained to the Rhythm" single artwork and merchandise available to purchase for $35. "I'm shocked that Katy Perry and Capital Records think it is acceptable to lift my work directly from my website and use it as they please without paying me or even contacting me," he wrote on Instagram.

The work in question is a 2012 digital piece from Sebastian's Holographic Melt Series, which looks uncannily similar to the background used on Perry's single art. While it's now several years old, the artist says there's been a resurgence of interest from this particular series, so he's not surprised it would have somehow entered the orbit of Perry's creative camp.

With a fury of comments in response to Sebastian's claims on Instagram — both for and against Perry — we caught up with the artist get some more insight into his allegations.

Describe the piece in discussion — what is it?

It's a piece from my Holographic Melt Series, I made it in 2012. If I had to describe what exactly it is, I'd say it's a digital textural experiment. I created this technique through random experimentation.

Your Instagram story says you're responsible for an art movement made popular between 2012 and 2013. What was this movement?

Well after making the holographic melt series, it became quite popular online, being shared/reblogged hundreds of thousands of times. it eventually became a trend — "holographic melt/holographic glitch" became a trend, [or] you could say movement, over the next few years after. It's also quite interesting that there was a resurgence of interest in the work more recently, as well — I have had commissions from it over the last couple of years.

Were you ever in communication with Katy Perry's team?

No, they never contacted me. I randomly came across this whilst browsing Spotify. I then researched more and found it was being used in merchandise, as well. A similar thing has happened before when I was walking through the London Underground, and saw my work had been incorporated into a company's advertising campaign on billboards without my permission.

As an artist, are there any legal protections in place to stop this from happening?

Well, you automatically get copyright protection the moment you create the work, which protects you when this sort of thing happens. The issue is that there is no respect on the Internet for artists' work and that's what needs to change.

PAPER has reached out to Capital Records for a comment — Have you tried to reach Katy Perry's team?

I have tried contacting them; Capitol Records make themselves hard to contact, so doing it through social media seems to be the best way of making sure something is done about it. Katy or her team are yet to respond.

What kind of work are you making now?

My work has developed and changed a lot since 2012; I'm currently working mainly on textiles and fashion. My current project is called Gel Futures — it's an experimental collection exploring silicone gels, thermoplastics and polyurethane systems. It brings together everything I've learned over the past few years whilst at Central Saint Martins — graphic design, photography, textiles, fashion — and merges it all into one project.