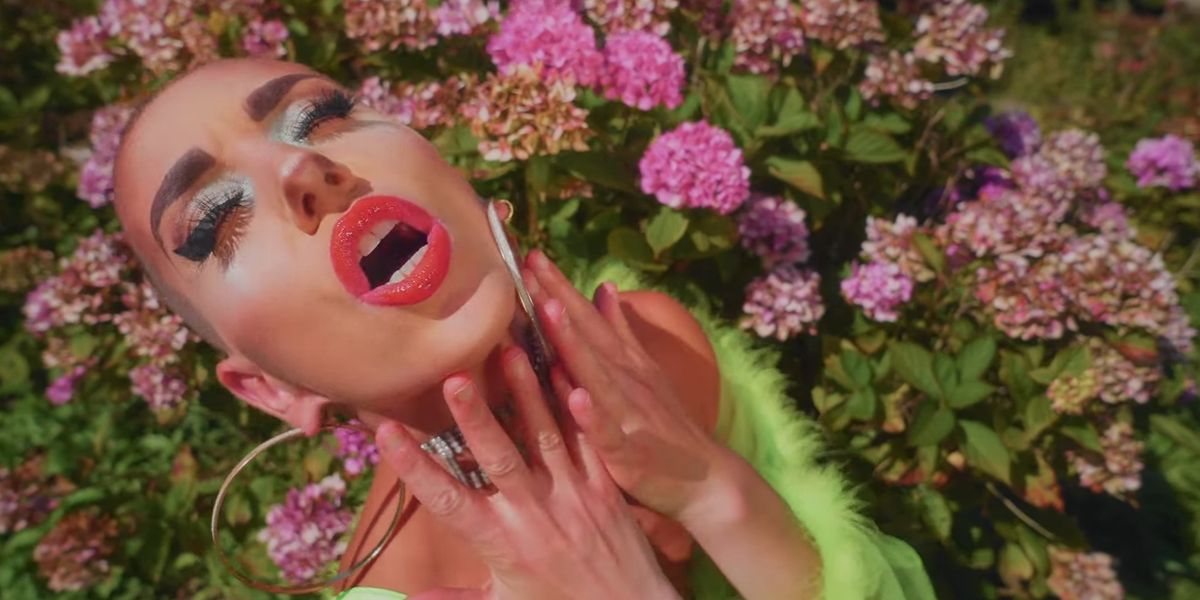 Like many who lose loved ones, Dolly Bing Bing, a queer performance artist and self-described "glamorous alien pop star" from Belgium, confronted her mortality when her partner died of a terminal illness in 2018. What's particularly remarkable is how she used her art — a heady blend of avant-garde pop, philosophy and performance using the body as sculptural artifact — to navigate hardship.

Today on PAPER, Dolly premieres her debut music video to "Eat Me," from last year's Angelbyte EP. On the surface, the song's abrasive lyrics: "Beat me/ Rape me/ Tie me down/ Break my spirit," and its soothing synth-pop melodies present a contrast between BDSM-style dominance and submission. But the best pop music reveals deeper truths upon further listens. In "Eat Me," Dolly is using her lyrics to plan her escape from cycles of seemingly endless desperation and pain.

The video, shot by Andrew Strasser and styled by Dolly in an array of attention-grabbing looks, makes these terms visible: she's wrapped in plastic and flailing in water; she's both puppetmaster and puppet in a hall of dark horrors; she seeks catharsis from flowers in bloom.

Below, Dolly opens up about the process of making the "Eat Me" video, which was all about surrender, her complex definitions of beauty and how Edgar Allen Poe's tragic poem "Annabel Lee" helped her work through grief.

How did you first discover Edgar Allan Poe's "Annabel Lee" poem? How did it help you with your grief in losing your partner?

I met my partner when I was his student at University and right away in his first class he recited that poem by heart, stating it was his favorite and that it touched upon the darkness of love and loss. He blew me away. Once we were a couple we felt it to be our "core poem" and often recited it together. It has a deep musicality. We did not know yet that it predicted something about the horror of our own tragic fate. The poem is about how the poet lost his little childhood love Annabel Lee, and how she got ill and died. It is a story that became true for us, but in opposite roles. I now use it as my "guardian angel narrative," as it was unconsciously chosen by my partner and by faith to both unite us as well as separate us.

If you've defined beauty "nothing but the beginning of terror," for you, does the terror have an endpoint?

Beauty as "nothing but the beginning of terror" is a quote that also stems from a poem, the first from the Duino Elegies by Rainer Maria Rilke. Ever since I read this incredible masterpiece, I chose this quote to be the best definition of what "beauty" could be. To me terror does not have an endpoint, terror must be something abyssal, something that surpasses any concept of beginning or end. It equals transitional processes like birth and death, a gaping void in our understanding, the liminal points and abject moments of creation and destruction. Beauty has the capacity to reveal a slight hint of that register. Not any other sphere, not science, not a theory, not a real life experience, has the ability to show it to us, as from a distance, let alone in a way where we can actually enjoy it and be moved by it without getting destroyed ourselves. Beauty can bring us terror as pleasure. It is a stabbing pleasure that heals and unifies: something "terrific."

What was it like making this video? Did you feel relief or a release of some kind?

It was hard to make this video. We [Andrew and I] chose to show some cruel visions: Dolly buried in the sand, chained up between poles on a beach in the night, wrapped up in plastic and "dumped" in the water, going mad. Enacting these situations was confronting and sometimes terrifying, as they all put me in a very powerless position. I had to fully surrender to "being out of charge." Exactly what also happened when we learned about my partner's terminal illness and when I finally had to let him go. It was my tribute to him. It felt a little bit, only just a little, like what he must have been going through — as if I wanted to pay for his sacrifice. It was also healing: it was a deep and strong moment to create beauty in the very heart of the place where till now had only been pain, grief, horror and tears.