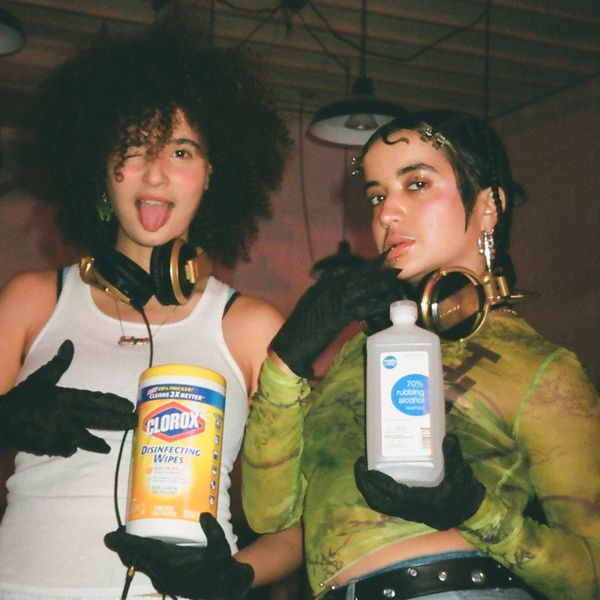 We're only a week into nationwide quarantine, but livestreaming has already become a way of life: Comedy on Wednesday, yoga on Thursday, a lunchtime DJ set with a band you saw once at Gov Ball on Friday. The phenomenon is double-pronged. With the entire music and nightlife industries out of the job, livestreams are much-needed opportunities for performers to work. But they're also a way to interrupt the suffocation of social isolation and keep communities connected until they can be in the same room again.

Discwoman, a New York City music collective and booking agency that represents exclusively women, trans and nonbinary performers like Juliana Huxtable and SHYBOI, were among the first to the trend. This past Sunday, Discwoman threw an eight-hour daytime dance party from noon to 8 PM, featuring some of the best DJs in New York City, livestreamed entirely on Twitch.

Last week, the NYC clubs that serve as Discwoman's home base like Bossa Nova Civic Club and Nowadays began cutting event sizes, then reducing programming, and finally closing indefinitely. As it started to become clear their artists would be out of work, Discwoman co-founder Christine McCharen-Tran was already scheming.

"I was seeing [Discwoman] artists lose bookings day-by-day all the way out through May. For some of our artists, this is their full time job and primary source of income," says McCharen-Tran, 31. "This reality, mixed with NYC venues figuring out how to engage their audience and artists made me want to figure out a process to support artists directly."

The event was a community effort. Discwoman conceptualized the event with Nitemind, a Brooklyn visual and lighting design collective run by Michael Potvin, who'd put out a call on Instagram for ideas to support their community. "Creating a moment of joy, transparency and accessibility was key to this project," says McCharen-Tran. The party's official mission statement: "Amidst this global panic many of our friends have lost work. Our intention is to make this platform + streaming environment as safe as possible for the artists involved and give them an accessible way to engage with their friends/fans while getting support in real time." Within 48 hours, they had a line-up and loaned gear from vendors (much of which normally would've been in-use at events like SXSW).

The livestream was filmed at a studio in Bushwick, where DJs in the Discwoman family including DisCakes, Akua, Katie Rex, Adam R, jadalareign, Oscar Nñ, Loka, quest?onmarc, and br0nz_g0dd3ss hit the tables in latex clubs, performing to an empty room. (This was before gatherings were decisively banned, so each artist was allowed two guests while Potvin and McCharen-Tran ran tech). Friends and fans filled the chatrooms, showering the DJs with praise and Venmos in exchange for the good vibes.

Best practices amidst Covid-19 have been changing day to day, and hour to hour. Discwoman is still deciding how and when to host future events. "There's a lot of uncertainty," says McCharen-Tran. "Though this time is ripe for new systems to exist."

A new system is definitely underway: the entire nightlife and entertainment industries have moved online. However, it still feels unclear if livestreaming will be a real alternative to in-person entertainment, or if people will be willing to pay for it. Certainly, livestreams will have to be one of many solutions if members of the nightlife community, whose livelihoods depend on gatherings, are going to make it through a quarantine. "If you are in a position to share resourcing and have salary privilege support those who do not," says McCharen-Tran. "Purchase artists' music, merch, or support them directly... Be nice and don't shame those asking for help."

While there's still uncertainty around livestreaming's financial impact, there's no question the virtual gatherings are lifting spirits. Dancing by yourself in front of a laptop doesn't feel natural, until it feels amazing.