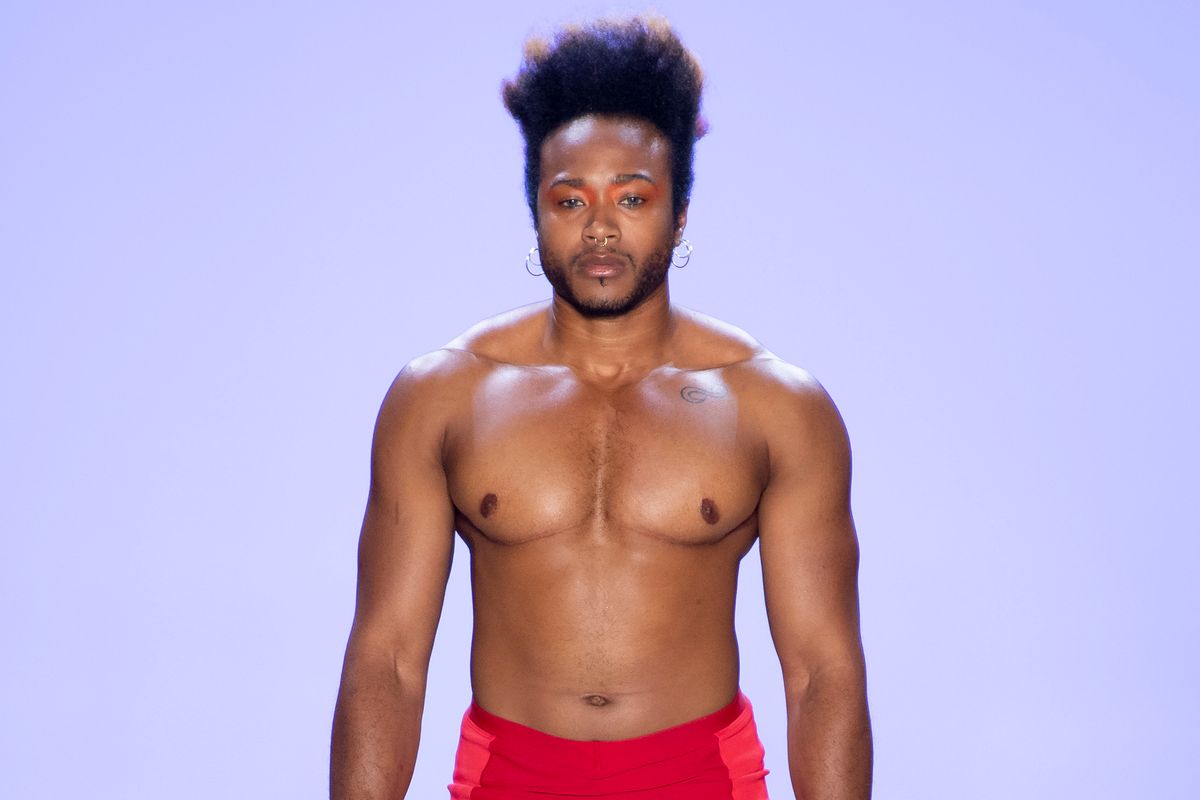 For Chromat's 10th anniversary runway show during NYFW, the New York-based label left no one out. Inclusion has always been a hallmark of the brand's appeal, casting models of varying ages, sizes, ethnicities, gender identities, and abilities.

This season, Chromat founder Becca McCharen-Tran and her team reached out to Devin-Norelle (pronouns: ze/zim), a writer and trans advocate who identifies as nonbinary. Though Norelle had been a fan of Chromat's ready-to-wear for years, ze was surprised to be walking their Spring 2020 runway — a first for Chromat, in terms of featuring an androgynous model who presented more masculine of center than in past shows.

Related | Chromat Lit Up the Runway With 10th Anniversary Show

Ze's pleasant surprise was also based on past negative experience navigating the fashion world as a transmasculine person. Back in 2014, Norelle went up for potential casting in Barneys' Brothers and Sisters campaign and was rejected for being "too short." Adding insult to injury was the realization that ze had been cut for not being "trans enough" or "cis enough," Norelle explains.

"As someone who has always identified as nonbinary, and didn't really care to be perceived as a cisgender man, this rejection really hurt," Norelle says. "I think because of that experience, I believed I could never fit the mold of a model, and this belief was reinforced by the lack of trans masc representation in the industry."

Now, five years later, Norelle is dancing on the runway with Rico Nasty, who performed at the show, and in more rooms with likeminded peers in fashion than ever. PAPER caught up with Devin-Norelle to talk about the process of officially becoming a Chromat babe, fashion industry representation, and what's next.

How did the decision for you as a masculine of center person walking for Chromat come about? What was the experience like for you?

I've admired Becca and her team since I first stumbled upon Chromat at an editorial shoot for Buzzfeed back in 2016. Jari Jones wore one of Chromat's pieces when she dressed as Grace Jones. I never believed someone like me could be taken seriously as a model and because of this, didn't go to any castings until I finally found the confidence to do so in 2019. I'm a nonbinary person that leans more heavily towards masculinity, yes, but I also embrace my femininity and attracted to feminine styles of expression. Naturally, I love of all Chromat's ready-to-wear lines. I reached out to Becca earlier this year to ask if I could try out. While I didn't make the cut in February, I was pleasantly surprised when her team reached out to me in August to schedule a casting.

The experience has been a match made in heaven. Becca has been working on many ensembles that, while feminine, can work with "masculine bodies" and would appeal to masculine identified people. DD wore my favorite piece from this season as it could easily be worn by any femme or masc presenting person. Being backstage with so many different models, many of whom are my friends, and many more that I only get to admire via social media, was very surreal. Everyone was very down to earth, and supportive, even during the most stressful times of the show. Rico Nasty was a pleasant surprise; I even danced with her briefly during the flood at the end of the show — and yes, it's on video. Overall, I really had a ton of fun and met and made many new friends. I hope I can continue walking with Chromat in the future.

What is you relationship to the fashion industry in terms of representation? How do you feel Chromat challenges this?

I was once rejected by Barneys in 2014 for their Brothers and Sisters Campaign. I was told I was too short. After meeting one of the campaign's models, who happened to be shorter than me, I realized I had been cut because I wasn't perceived by Barneys' casting directors as "trans enough or "cis enough." As someone who has always identified as nonbinary, and didn't really care to be perceived as a cisgender man, this rejection really hurt. I think because of that experience, I believed I could never fit the mold of a model, and this belief was reinforced by the lack of trans masc representation in the industry. Even with the little representation that did exist, trans masc models were almost always skinny, tall, fit the industry's standards of androgynous and were very, very white.

Chromat has repeatedly rejected these standards. They've consistently hired people of color, curve models, differently abled models, and have also ensured that their swimwear fits all size and body type. Had I medically transitioned or not, I'm more than positive I still would have made the cut as Chromat's first masculine for center nonbinary person. Their message has always been about genuine inclusivity.

"Had I medically transitioned or not, I'm more than positive I still would have made the cut as Chromat's first masculine for center nonbinary person."

What's next? What else do you have in the works?

I'm primarily a journalist/writer. My essay about the fashion collective dapperQ was published today, and will also be featured in OUT's Fashion Issue dropping later in the month. As for modeling, I'm slightly regretting going on vacation the last week of August and missing out on the castings for two of my other favorite designers, No Sesso and Gypsy Sport, but there will always be another season, and another opportunity to strut my stuff. In the meanwhile, I'll keep pitching editorials, shooting with my bud, Tiph Browne, and writing. Later in the month, I'm speaking on a panel about the spectrum of masculinity and will also be advocating for my community at the Trans Equality March in Washington, D.C. on the 27th.