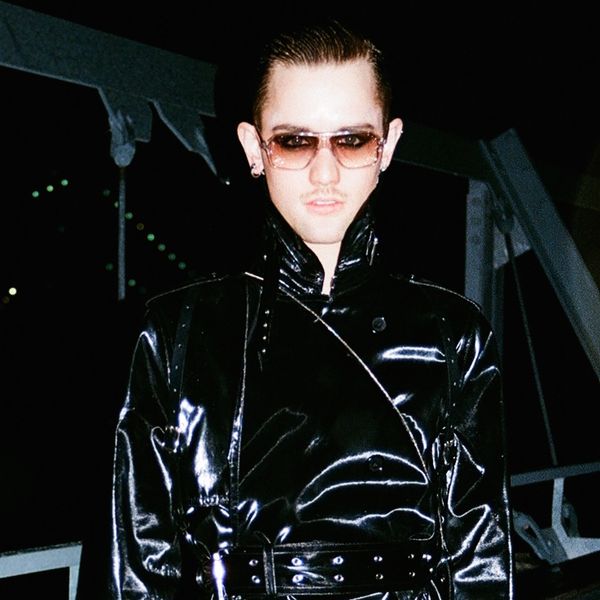 Popularity is relative, and especially in the digital age. You could have hundreds of thousands of followers online, but be completely unknown in the streets — massively famous on Instagram, YouTube or Twitter, but lack any kind of real, authentic cool in person. For our new series, Coolest Person in the Room, New York-based photographer Megan Walschlager pinpoints all the people whose energy is contagious regardless of their following count or celebrity. Meet McLayne Ycmat, the NY-based art director, fashion obsessive and style icon you need to know.

I'm an art director and a graphic designer. I'm at this company called Framework which is within an agency called Black Frame. Basically I do art direction for fashion campaigns and magazines. I used to work for Fabien Baron when I graduated college, and I did art direction for the Dior campaigns and Dior Magazine. And now I do Garage Magazine and I work on campaigns for the brand Woolrich. They're a heritage brand and we've been working on rebranding them. I also work on Helmut Lang and Kenzo.

Did you go to Parsons?

Did you study fashion design?

Oh, I thought you did. What did you study?

Communication design, but everyone at Parsons also thought I studied fashion design. I grew up Mormon in Utah. When I came out and went through all that, I was basically like, "Fuck this!" and applied to Parsons. My parents weren't super supportive of that, so to show them I took out all these loans to come here. Now I pay so much in student loans.

Really? Well, it's good to know other people do too. It's fucking ridiculous.

Truly. I always think it's so funny that you're from Utah because you have such a cosmopolitan air about you.

It's so funny — a lot of people that work around me in the industry — especially when I worked for Fabien, and I know this is the case for a lot of European brands — but you grow up with this idea of what luxury is and how to look chic or whatever. And people are like, "Oh, my mom was my biggest inspiration." And that was not the case for me. The Internet taught me a lot.

You're also really active in New York nightlife. How did you get started in that?

It started pretty organically because I just started going out a lot. My first gig was doing Flash Factory for Nicky Ottav, but my first official gig was subbing for Jordan [Stawecki] at Linda. Then I just started doing other things after that. Like Ty [Sunderland's] pool party and then LadyFag. Harry [Charlesworth] and Jordan [Stawecki] were like, "If you wanna host for Lady, just ask her! That's what we did." So I told her and it wasn't until like months later that I was talking to her at Battle Hymn that she was like, "Oh my God, Why don't you host for me?" and I was like, "I'm waiting on you!" Now I do Lady, and I just hosted Unter which was amazing. The music is so good there. And I got to be on set with Seva [Granick] — who started it — for a campaign I was doing for Woolrich, so we got to know each other and that was really cool.

Do you remember your first party in New York?

Oh girl… yes, I do though. It was called The Chocolate Factory and it was in Bushwick. And this was like a Parsons freshmen type of thing. It was like a house party off the Morgan L stop.

My first nightlife experiences after that were like The Darby, which is Up and Down now, and lAvenue, the Dream Hotel PH-D. And I remember I hated it. It's funny because it was actually an issue in my relationship at the time. He was so mad that I never wanted to go out and now I'm so not that person.

Actually, when I started working my full time job for Fabien, which was super intense, I basically needed to go out. So that was the first time I really started going out every week. Because before that with school and stuff I didn't really.

Do you have a specific getting ready routine when you're going out? For example one of my friends in college wouldn't have a sip of alcohol before she finished her eye makeup.

Oooh, I get that. I guess I'm like a natural host. I always want to bring my friends together. Actually when I lived in Utah and I ran away, I was introduced to this gay group. Since my coming out, I've been surrounded by, like, groups of gays. Salt Lake City is actually like this queer haven, and so when I ran away it was the first time I really saw these gay guys in heels and makeup and they were just so much fun. I love gay people. I guess in terms of pre-game rituals, I try to make everyone meet at my place. Everyone always ends up wearing my clothes.

They always ask to wear my clothes! And I always end up doing everyone's makeup because they ask me to! In no way am I like dressing up my friends to look like me — I'm not that person — I just let them wear my clothes.

Totally. You have a very specific aesthetic.

Yeah and it caught on.

"Right now I'm super inspired by the cosmos. I'm fucking obsessed with it. Everything I do now needs to have some scientific grounding."

I have to ask you: when, where and what was the inspiration for your iconic smokey eye?

Paolo says you invented it.

Invented it? No. You wanna know the first time I did a smokey eye? It was for a halloween costume of Adam Lambert.

Yes, I sat there and copied a picture of him. That was in high school. Honestly, I've been wearing makeup everyday since high school — like concealer and stuff like that — and it has always been to just make myself look better. I feel like when I'm doing my smokey eye, I'm doing it to make my face look better. Like more snatched. Like it isn't coming from a place where I'm looking at a photo like, "Oh, I want to be that person in eyeliner." I just kind of do it. It's like photoshopping or FaceTuning in real life.

What is your go to drink at the club?

A whiskey sour. Or some really really gay drink like a tequila sunrise. I don't drink vodka. I hate vodka. I mean, okay, I do drink vodka but I don't buy vodka.

Where are some of your favorite places to go in NYC?

Well, I used to go to Roosevelt Island all the time. There's this spot where you have to climb over a fence, then you can get down to the rocks onto the river. I love to just like chill there with friends and smoke a joint. In terms of going places, I'm not super attached to any establishment because I think it always depends on who's there and who I'm with. I really just like being outside when it's warm. When it's summer, I'm out.

One of my favorite McLayne memories is that summer when we all went to Fire Island and we met up at the train, and you were wearing three pieces of cloth but none of them were actual pieces of clothing.

Yes! Speaking of that. That's where I like to be. In the heat, half naked, on Fire Island.

I think another layer of your mystique is you always have so many references and so much archival knowledge.

Oh, well that's just because I am obsessed. When I found Style.com — wait, actually you want to know what it was? Ugly Betty on ABC. I was obsessed with it. So, I actually — literally — used looking at runway shows to continue my obsession with it. And eventually I was like, "Woah, this shit's actually fascinating." From the beginning I got books — queue a montage of me studying. I would quiz myself on fashion shows. That's how I knew I wanted to get into fashion advertising. In high school I took a class on graphic design and I did well, and my teacher even helped me get paid gigs. And I just knew, because I love fashion so much that I wanted to do art direction.

Do you have any favorite books or shows that you always go back to?

I'm currently obsessed with Dutch Magazine. They've been out of print like 15 years or more now. It was a '90s magazine, but every picture, layout, everything is just amazing. I'm obsessed with magazines particularly. I collect all that shit. But apart from that, the Internet has become such a solid basis for both my career and myself, so it always starts on the Internet. I'll find a picture I like or something, then I'll go deeper. This sounds really cliche, but the things I'm inspired by change. Right now I'm super inspired by the cosmos. I'm fucking obsessed with it. Everything I do now needs to have some scientific grounding. I know that sounds so dumb, but that's why like my Instagram profile picture right now is a diagram of the earth's rotation [Laughs].

Do you have any personal projects coming up? Didn't you do a really big side project last year?

Yeah, I helped my friend Peter Do with his logo and the launch of his brand. And he's doing really well now. I just did an album cover for my friend Morgan — her name is Morgan Saint and she is signed to Sony. It was so cool because I felt like it was the first thing in a long time that I was able to show my distinct taste. I want to work in music a lot more doing album artwork. Especially for electronic music.

I'm really inspired by a lot of electronic music right now. I know that sounds really cliché too. I listen to a lot of trance music, but I realized my personal taste is actually called melodic techno. It's very like Deadmau5, Kaskade. I still listen to Deadmau5. I've been to a Kaskade concert and I was literally, like, crying. I used to be so ashamed of this until my friend also confessed he was into it. Then I was like, "Ok, I guess it's cool to be so unashamedly into something like Deadmau5 and Kaskade."

Patti Harrison and Sasami Riff for an Hour Straight