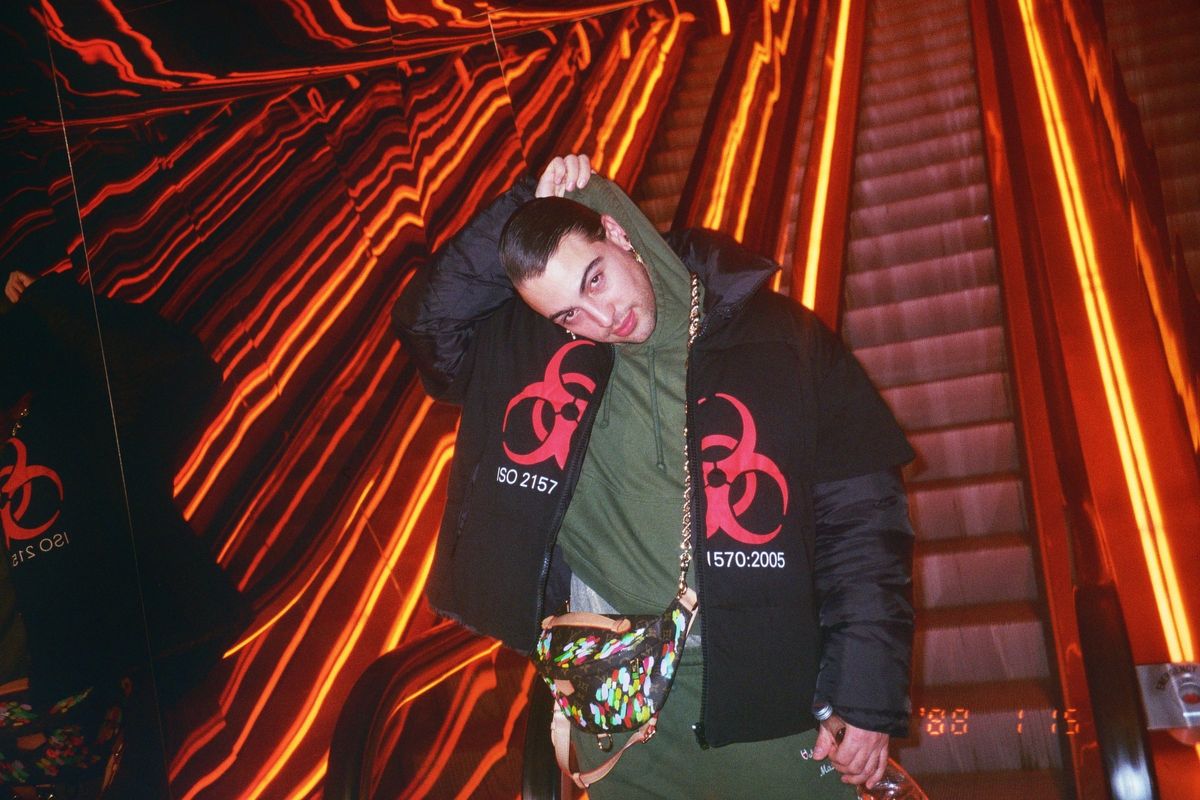 Coolest Person in the Room: Mazurbate

Popularity is relative, and especially in the digital age. You could have hundreds of thousands of followers online, but be completely unknown in the streets — massively famous on Instagram, YouTube or Twitter, but lack any kind of real, authentic cool in person. For our new series, Coolest Person in the Room, New York-based photographer Megan Walschlager pinpoints all the people whose energy is contagious regardless of their following count or celebrity. First up is Matthew Mazur (@mazurbate), stylist to the pop stars (Kim Petras, CL), and widely booked New York-based DJ.

I am a stylist for Kim Petras and CL.

I used to work at Jeremy Scott doing in-house everything, and I met CL through him. She asked me to work on her creative team for styling and everything just blossomed from there.

What's your other hustle?

I DJ, which I actually started doing before styling.

When I was in school at Parsons I was really broke and I used to go out to Avenue a lot. One night, we were celebrating a friend's birthday at someone's apartment and I was playing music off my iPod, and my friend who was a promoter there asked if I wanted to DJ at the club and and I told her I had never DJed before.

Wait, off an iPod?

Yes, she asked me to play that at the club and I was like I've never DJed, but ok! And then I did it and then I got a residency at Avenue. I was 18 — I wasn't even allowed to be inside — but I played there on Tuesdays and Thursdays. And I was DJing with all these classic New York DJs like Franco V and Spencer Product.

The whole reason I started DJing in New York is because I felt like the music scene was so bad. My friends and I just wanted to dance. So I started to get really cocky when I was really young — like 18-20 — and my two best friends Michelle, Luisa, and I would persuade the DJs that were DJing at the club that I was supposed to go on next.

What do you mean?!

We would talk them out of their set times, and I always had my equipment with me. At that time people were using laptops, so I would go to the club with a huge tote bag. I actually was banned at Le Baron for, like, awhile. But I remember I went up to my friend (well, we're friends now), and I told him I was supposed to be DJing and I convinced him that André Saraiva had booked me, because I didn't like the music he was playing, and so I DJed that night. But it happened all over the place.

What kind of music do you play?

World beats, lots of Latin music and anything with a rhythm and tempo I think is worth dancing to. A lot of it is based off my Latin upbringing, so I play a lot of Brazilian Funk, Jersey Club, Reggaeton, Dembow, Merengue, Bachata, Hip-Hop and R&B. I also am a Pop head so it creeps in there in my sets.

What is your current favorite song to hear played in the club?

"Twerk" by City Girls and "Money" by Cardi B.

Ok, so tell us who is on it — drop a couple songs.

"He Wasn't Man Enough for Me" by Toni Braxton

"I Will Survive" by Gloria Gayner

"Good as Hell" by Lizzo

"Express Yourself" by Madonna

Has anything remarkable happened to you after hours?

When I was 18-20 and going around with my friends wearing full looks, we would get so messed up, but we did our best PR there — because that's how we met everyone we now work with. People we work with now in creative fields we met back then — they knew us as the kids that were giving looks. Back then everyone was giving kind of Rock 'N Roll, Punk, post-Hipster kind of looks, but we weren't doing that.

What is your favorite spot in the club?

Behind the DJ booth because I have the most power there. I'm a control freak (a.k.a Virgo).

Where do you go in NYC?

I usually choose where to go by music. I follow my favorite DJ's — wherever my friend Dicap DJ's, The 9AMBANGER, PIZZA ZOO, or whenever a PapiJuice is happening. Also, I'm not sure if this has a following, but Boxers in Hell's Kitchen on Saturday night is the most incredible place for music. I have danced for four hours straight there on nothing but water.