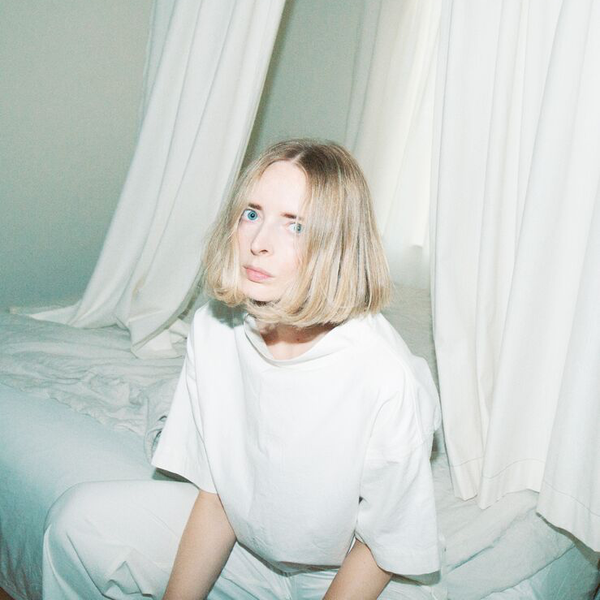 There's a tiny recording studio situated behind a vape store in Santa Monica. It often smells sickly sweet, a result of the fruit-flavored smoke that wafts around the walls. Here, New Zealand artist Chelsea Jade is able to assume her truest form. No one knows who she is... they might not even notice her come and go. Behind the Santa Monica vape shop, Jade is not a college drop-out, a dream-pop sensation or a household name, Chelsea Jade is a ghost.

At least she thinks she is. In reality, Jade is finding it increasingly difficult to fade into the background. With saucer-like eyes and voluminous lemon-blonde bob, Jade does not read wallflower, and her creative output won't let her remain nameless in her newly-adopted America for long. A SoundCloud darling, Jade rose from of the Internet's designated depths for indie it-girls to become one of the most prolific singer/songwriters in New Zealand, and it wasn't long before her talents were sought Stateside.

Leaving an art school behind in favor of musical frolicking in a Bushwick apartment, Jade released various successful EPs and scored The Chainsmokers a chart-topping hit all before last week's big debut, Personal Best — a superbly visceral 11-track offering which is nothing if not true to its name. Yes, Jade has long-since conquered New Zealand, and the world will be next to fall.

What was it like dropping out of art school?

I struggled so much with it. I left right before my exams. I met this guy who I met in New Zealand and he flew me to New York. He was like, "Are you having a miserable time? Come to New York." My parents were emailing me all these warning notes and I was like, "I'm so happy in this studio apartment in Bushwick, trying to make songs."

Do your parents understand now that you made the right call?

I think that they've made peace with it. They probably reached acceptance when I signed a proper big deal.

You were legitimized. I feel like that's a New Zealand thing — we're from such a small place that no one really believes you're going to make it or do well.

They also don't accept varying degrees of success. To be honest, the way that I think about it is that in New Zealand, I always felt like I had to be an immediate genius to be considered "good."

You couldn't be seen hustling, it's so embarrassing.

So embarrassing, and [New York] its the opposite. People talk themselves into believing they are geniuses. I think the difference between those two things is that in New Zealand, you work really hard and you don't talk about it. Here, you talk about it a lot.

When you were starting out, did you see the American market as this thing that needed to be conquered?

I don't think so, because I was living in the art school mentality. You just don't equate it with business. Only when I moved to America did I realize that there was just no shame in monetizing your product. It dawned on me that you should treat your art like business, like any other small business. There's really nothing more beautiful than that: running your own shit.

"There's really nothing more beautiful than that: running your own shit."

How do you feel as an international artist working in the American landscape, given how fraught it is with political tension?

I was here for the election and I felt this deep sense of mourning, but I feel like everyone felt this way — just this humongous sense of grief. I had to think about another way that I could make it feel okay. With music, my thing is more about the nurturing of moments rather than the broad aspect or the big picture. I feel like I can touch on the emotions that are associated with different topics, but for me to extrapolate largely on different kinds of things is just not my game.

Do you feel free here?

I feel total freedom in that I don't really know anyone here. As opposed to New Zealand, where everyone knows what you're doing before you do it. I really do thrive off it. And I think you can hear the lack of labor in the songs in particular, because of that feeling especially with the lyrics. They still have melancholy, but also that angle of making fun of yourself.

How did you feel about the music now?

I like it because there's no way I can make what I'm making now if I didn't have my own homeschool/self-education. Even though I dropped out of art school, I miss doing all the indulgent shit. I literally subjected my whole class to me doing a tap dance for 30 minutes. It was the same moves and over and over. I had microphones pointed at my feet with tap shoes on and had an amplifier, and I did a loop once and I looped it, and the sound from the amplifier was just getting more and more obnoxious. The fact that my class had to sit there and watch that.

If I hadn't done that, I wouldn't have thought it was cool to have a huge ice block in a music video. I like things that are funny and weird or to put myself in uncomfortable situations. Like after having a leaf blower blowing on my face, I stopped really giving a shit about whether I looked cute. That's not what art is and I can't relate to that.

America is driven by image. Did that impact your look?

Not really, but I tell you what is: Living in California, there's such a focus on wellness, even though I'm drinking a coke in front of you right now.

Are you a jealous person? Competitive?

I went on a 10-day meditation retreat.

It was so brutal. Jealousy was like the apex that I would write off. I would always write songs about it. I feel like my regular life goes through stages of realizing that I'm actually quite awesome and then realizing all women are actually quite awesome. It's one of the top things, just not competing with other women. I was jealous and had been conditioned to think this way and I don't want to indulge it. It means so much for women to have a kinship.

Do you think music is becoming more accepting of women wanting to take the reins?

It's funny. I remember being in the faze of hunger of wanting to learn [production] stuff. I went to a songwriting camp and they asked me what I wanted to learn and I said, "I want to learn how to record vocals really well." Then they told me that takes years to learn. I was like, "Okay, well that must not be for me." Several months later I encountered this female artist in LA, and I said to her, "I really want to learn how to record pop vocals." She kind of cut me off and was like, "What can we do to get you started on that?" That's all you need — for one person to get you started,

Is that something you would want to do for other women?

What I've always wanted to do which is facilitate female songwriting and production. The fact that I co-produce my music and produce my videos is so uncomfortable to say even though it's absolutely true. Even recently, in my video I got a co-directing credit. I don't want other women to feel that hesitation anymore. Being able to ask if we can do this, and then a year later have it happen. That's the career I'd like to see myself have. I want more of that.