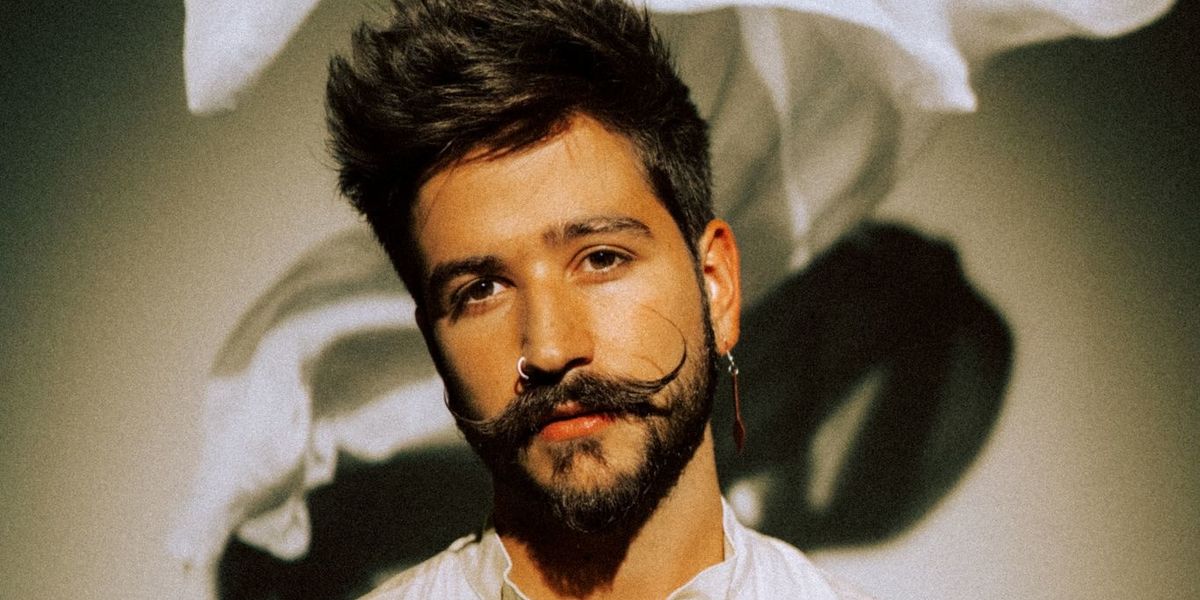 Camilo is glowing up right now. After receiving his first Latin Grammy nomination as a songwriter last year, the Colombian musician is nominated for three of the biggest awards at this year's ceremony: Song, Record and Album of the Year. And it's for music he wrote for himself. After being listed in the credits of multi-platinum hits by Latin music superstars like Becky G, Karol G and Bad Bunny, he and his signature handlebar mustache are staring right into the camera on the cover of his first LP in a decade, Por Primera Vez (For the First Time.)

"This album feels like it's my first album," Camilo tells PAPER. "I found my own sound helping other artists look for their sound. Now me being the one that's right there with my name and my face, that means a lot to me and it's so beautiful."

Back when he was using his full name, Camilo Echeverry, he got his start in music in 2007 as the winner of a Colombian variation of The X Factor. After releasing two albums locally, the former teen idol parted ways with his label. Por Primera Vez, already certified double platinum in the US, marks his return. "I discovered with this album that there's no substitute for honesty and transparency," he says. "It took me almost 12 years to understand that, but I'm super grateful that that happened in that way. It was almost like a therapeutic process." It's that transparency that runs through his whole career that he cites for his closeness with his fanbase that he calls "La Tribu," or "The Tribe."

Camilo's new music is markedly personal. In his recent music video for their duet "Por Primera Vez," Camilo shares footage of his wedding to Evaluna Montaner, daughter of Argentine music legend Ricardo Montaner. In the follow-up, the bubbly "Favorito," he shares footage from their honeymoon. In his latest "Vida de Rico," they can be seen moving into their first house together, with hilarious results. Camilo has let viewers into his life every step of the way, and each video has hundreds of millions of views. "I don't have a line that divides my personal life and my artistic life," he says. "I write songs because I need to put into songs what I'm living day by day. That's the kind of relationship I have with La Tribu."

Before La Tribu existed, when still in record contract limbo, Camilo found support from the Montaner family. In 2018, Evaluna's brothers, the musical duo Mau y Ricky, invited him to a writing session for Becky G and Natti Natasha's sexy "Sin Pijama" that changed his life. "It was just a song we wrote having fun," Camilo says of the 13-times platinum hit. "We weren't expecting it to be one of the biggest songs that year. When I think about my career as a songwriter, they were all women I worked with, like Lali, Karol G, Anitta, and Leslie Grace. I'm super grateful to those Latin female artists who put my name on top as a songwriter in that moment."

Another woman inspired his comeback album: his wife Evaluna. "It's all about her," Camilo says about the collection of songs that finds a happy medium between reggaetón and pop music while accentuating his quirky persona. "Right now in my life, Evaluna is the center of my emotional attention." His breakthrough hit, last year's "Tutu," was titled after his nickname for her. The adorable bop that he recorded with Puerto Rican singer Pedro Capó is nominated for Song of the Year and Record of the Year. To top it all off, it also caught the attention of an icon from his country, Shakira.

"I was in my house having breakfast and my phone started vibrating a lot," Camilo says about the reaction he received when Shakira posted a video of herself singing along to "Tutu" on Instagram. "When Shakira, one of the biggest idols and artists in Colombia, said that her favorite song in that moment was 'Tutu,' that was such a shocking moment. I commented, 'Wow! This is mindblowing. I declare that we're going to do something together one day.' She was like, 'One day? No. Let's do it right now! A remix.' Holy crap! It was beautiful." The two later recorded a remix of "Tutu" that helped propel Camilo's career.

On one of the album's sadder moments, the haunting "El Mismo Aire," he envisions a darker timeline for his marriage. "That's a song I wrote from insecurity about my fears around our relationship," Camilo says. "I was thinking about the possible ways for my beautiful relationship to end. Writing a song about heartbreak is like protecting myself from having a heartbreak like that in real life." The song is notably his second nomination in the Song of the Year category against the thematically polar opposite "Tutu."

Camilo released Por Primera Vez at the start of the COVID-19 pandemic when people around the world were quarantining in their homes, so he had to approach the promotion strategy differently. "TikTok was one of the things I explored the most in quarantine," he says. "When we had planned to release the album, we were going to go out and travel to every country for promo, but since we were in the house, we were having fun trying to look into new and happy ways to connect with the people who were also locked-up in their house too."

Now Camilo is the most followed Latin music artist on TikTok with 17.8 million followers, and his Tribu is growing by the day because of it. "We take too seriously every other platform for our career," he says. "TikTok has this weird and funny way to share your stuff, so this was a huge trampoline for us and this album." The kooky dance Camilo created for his cumbia-influenced "Vida De Rico" is one of the platform's most viral moments.

In quarantine, Camilo also revealed that he finished his follow-up to Por Primera Vez, that's due out in either February or March of next year, and that he's already started working on that future album's follow-up. Camilo views his rebirth as an artist as a spiritual experience and the message behind his movement is "Amar es la Revolución," or "Love is a Revolution." His sun sign is Pisces after all.

"I do believe that love is the biggest of all possible revolutions," Camilo says. "I do believe that every little song, every smile that one of my songs gives people, every positive message, and every little detail is changing the world. That's my purpose: to be an instrument of God's love to impact as many people as I can through my songs and through my music. I still believe and I still fight for love being the biggest of all revolutions."