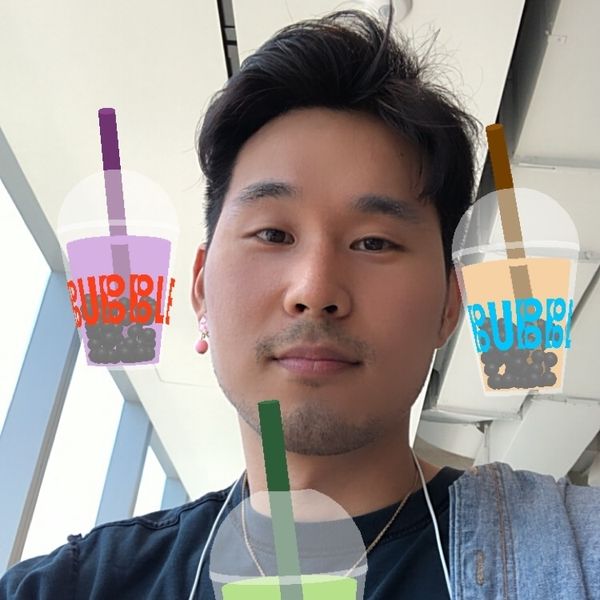 You've seen them all over Snapchat and Instagram: people sporting everything from CGI dog ears and rosy cheeks to ghoulish demon masks that sparkle and shoot digitally rendered lava. The face filter has grown from an amusing novelty to an entire genre of artistic self-expression.

Ever since Instagram opened up the platform last year to third party developers, the app has been flush with creators circulating their own custom face filters. Perhaps you've even used the massively viral Beauty3000 filter to add a little futuristic gloss do your selfie? So when we saw this ultra-cute bubble tea filter making the rounds, we had to find out who was responsible.

The work of artist Thomas Jeon (@codewitch), it has all the hallmarks of what makes a great filter: not overly complicated, interactive, and fun. (It's hard not to crack a smile as boba bubble fire themselves into your open mouth.) The filter also doubles as promotion of the queer Asian nightlife collective, Bubble_T, which has risen through the ranks of Brooklyn's nightlife circuit to be one of its most popular underground series.

PAPER caught up with Jeon to learn a little more about what goes into the making of a hit face filter, and how he came to be involved with one of New York's coolest queer collectives.

How did you get your start making face filters?

I saw people making filters after Instagram released them and I thought, I could do that too. At first I was just playing around, but it soon became addictive. I would spend my Sunday afternoons teaching myself and experimenting with different ideas. I'm a software engineer by day, so I don't get to exercise my creative side often. Making filters quickly became an outlet for me to merge my interest in design with my skills as an engineer. There's a lot of people out there making such cool pieces and it inspired me to put my creations out into the world too.

What goes into the making of one?

Instagram recently released a platform called Spark that makes the process pretty straightforward. It's a bit like Photoshop for filters. You have to create your own asset and more complex ideas might require coding to execute properly.

What is your general approach when conceptualizing them?

I'll get ideas randomly, so I keep a list on my phone. It's way longer than I could actually accomplish, but it helps me sort things out. These ideas can come from anywhere and many of them actually come from my friends. The weird faces that they make or the the energies they exude. I recently released a filter inspired by the makeup looks of drag performer Mahal Kita. My next inspiration is my friend's obsession with clouds, so keep a look out for that! Once I have an idea though, I get into execution mode where I become very action oriented. I flesh out a plan on how to execute and when I can put in the time. Life gets busy, so I find that being intentional with my time helps me be the most productive.

How did you get involved with Bubble_T?

I started going to the parties two years ago. It was way smaller back then, so everyone kind of knew each other. I soon became friends with the crew, but it wasn't until recently that I started helping out with the production. I had an idea of a giant hand holding a joint with a smoke machine attached for their Jade Cloud 420 party in April. They were very down, so we spent a couple days in Nick Andersen's studio to crank it out. (Nick Andersen is one of the founders of Bubble_T and also co founder of Confetti System.) I've always been very inspired and grateful for the community Bubble_T has brought together, so being able to contribute to it has been a dream come true for me.

When did you decide to use face filters for Bubble_T? What has the response been like?

I had previously helped out with production design for one party and I wanted to contribute in a different way. Me making filters all just lined up and honestly, I just wanted to make a boba drinking filter! Who doesn't want to sip on some bubble tea? The response has been very positive and way more than I had imagined. There is a sense of satisfaction seeing people having fun using your creations. You see them smile as soon as the bubbles hit their tongue. Many people have since reached out to me to help them make filters, so keep an eye out. I will be releasing more soon.

Where can people go if they wanted to try them out for themselves?