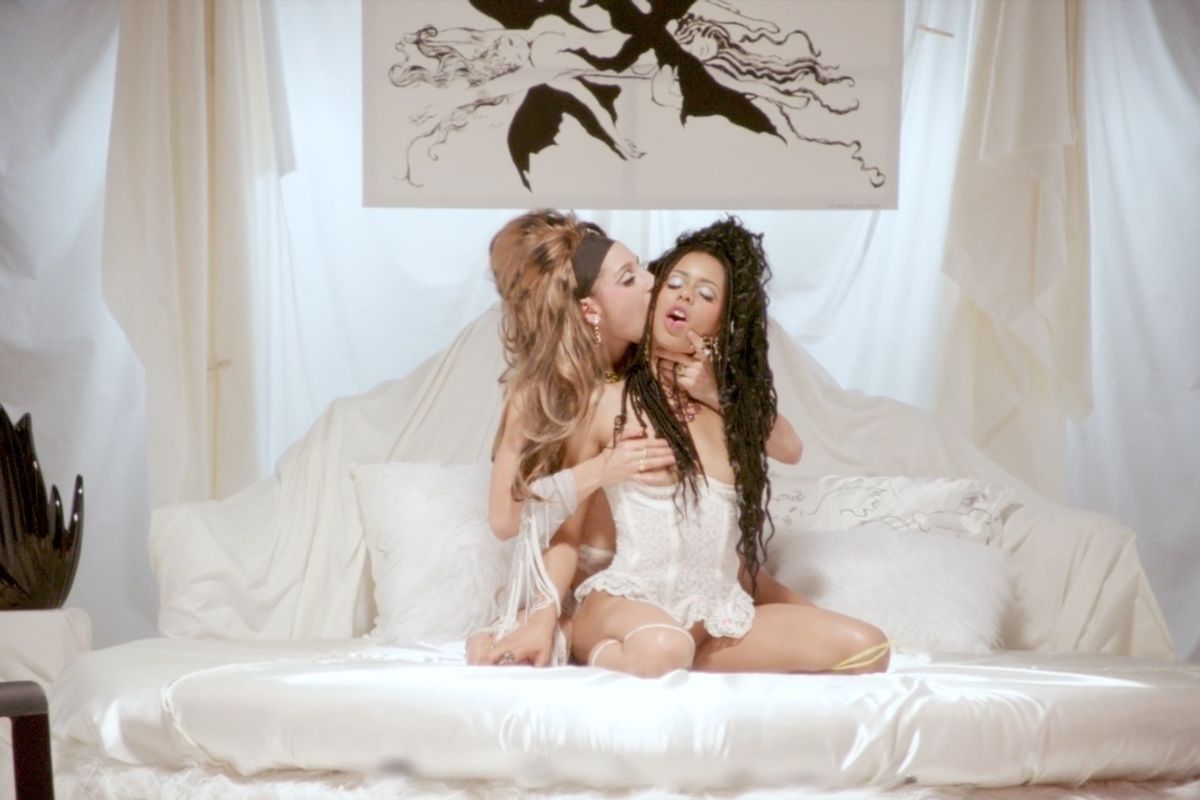 Musician, rapper, artist, and general icon in the making Brooke Candy has a new NSFW project, her directorial debut: a queer pornographic film, called I Love You. Created as the second installment in Pornhub's Visionaries Director's Club series (the first was Young M.A.'s The Gift), I Love You is a strikingly gorgeous movie, with a baroque, romantic aesthetic drawing from Greek and Roman mythology and artists like Matthew Barney and Bruce LaBruce (influential artists including Jeanette Hayes, Claire Barrow, and legendary hairdresser Charlie Le Mindu were also involved).

I Love You, which stars actors Abella Danger, Kira Noir, Jesse Prather, Remy Cruze, Venus Lux and Chanel Santini, is the first adult film to feature full-length gay, lesbian, and trans scenes all under one title. It's truly boundary-breaking, so we spoke to Candy to get the lowdown on her process. Watch I Love You and learn more, below.

Tell us about the film's aesthetic.

Every scene was so exciting to create from scratch, but the general aesthetic of Act 3 was my favorite. It was inspired heavily by fantasy, mythological folklore, and ancient Egypt. Will Sheldon, one of my favorite tattoo artists, painted the murals on the wall, which have a bit of an elf punk aesthetic. And Luis Ortega helped me to realize my vision of the glass glory hole bathroom stall. My art director Claire Barrow helped me to assemble the team, and pulled in amazing artists like Sarah Nicole Francis who did animation and Nic Seago who edited. Leya scored the film with live harp and violin, and Sega Bodega helped sprinkle some magic to the vibe with his sound design. We also featured art from Jeanette Hayes, and graphic design by Toby Evans and HARD.

The baby hair-like styling on the pubes is amazing. What lead to that choice?

The hair was done by Charlie Le Mindu, and makeup by Daniel Sallstrom. They were an amazing team that took my references and ran with them, making them their own. Coco Campbell styled the film and added a ethereal fairy Grecian vibe, which I think is safe to say is my favorite aesthetic at the moment. We used Grecian and Roman mythology and classic icons of romance to make it as decadent and sensual as possible.

"I wanted to create something that felt like a safe space, something that could teach them that sex is beautiful and can be creative and strange and filled with magic."

It's a very inclusive film. Could you tell us about the thought behind the cast?

It was so important for me to make an inclusive film like this because it doesn't exist in a community that so desperately needs it and deserves it. I think the young gay community sometimes looks to porn as guidance because they live in communities that shun them, or don't put in effort to teach them about their specific sexual orientation, or how to explore it safely and with love. I wanted to create something that felt like a safe space, something that could teach them that sex is beautiful and can be creative and strange and filled with magic. That the sex they could strive to have could be art, that it could be unique and fill them with confidence and compassion.

Casting was done based off of the inner light and uniqueness of each actor. I did extensive research, watched several of their individual films, and I found people that radiated love, confidence, purity and some semblance of a high vibration. I wanted actors who didn't need direction, who were the real deal. I wanted actors who wanted to make love.