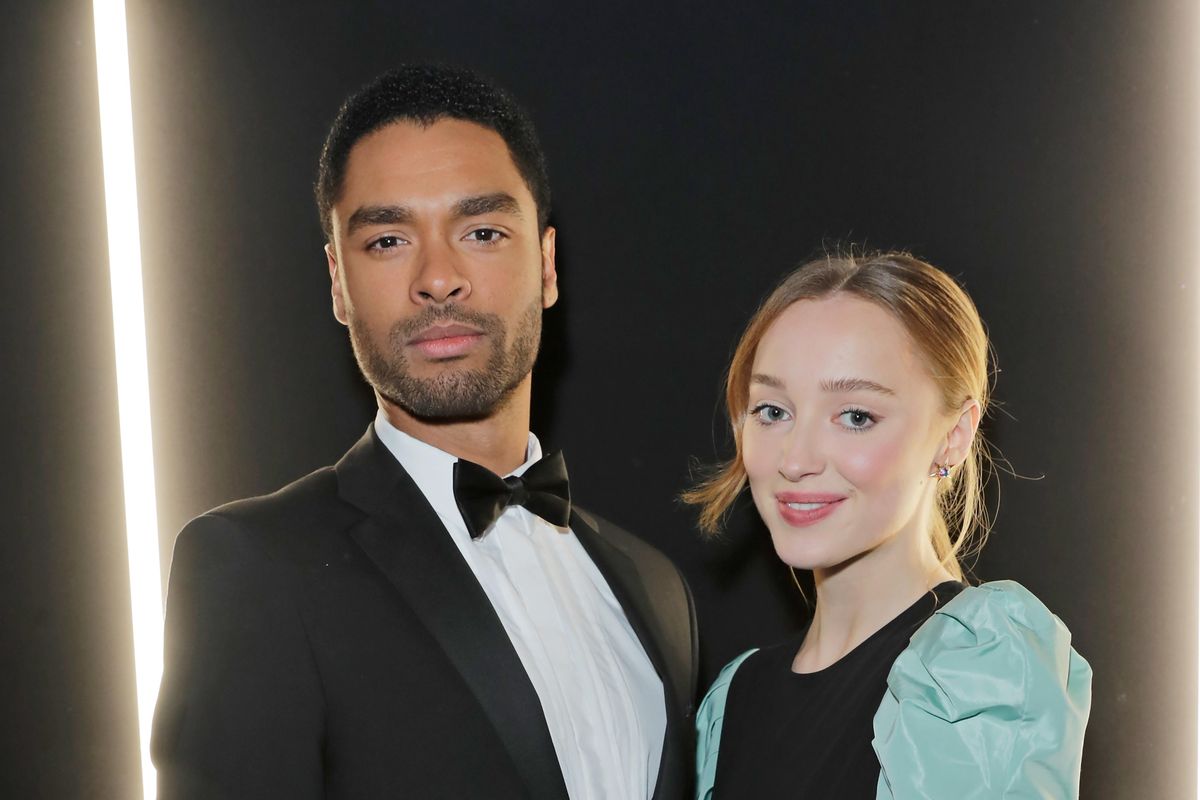 Ah, Bridgerton. Shonda Rhimes has never let us down, and her first Netflix production is a fluffy period piece — literally, ruffles abound — that's somehow also thoroughly modern in its saucy writing and colorblind casting. Adapted from a popular series of romance novels, this show is a far cry from the stiff, historically accurate BBC dramas you're used to. Instead it's a corset-ripping romp starring some very, very hot people wearing costume jewelry and challenging each other to gunfights at dawn.

Now that we've binged the series with the enthusiasm of Queen Charlotte pouring over Lady Whistledown's society papers (and been pleased to have correctly guessed the Regency-era Gossip Girl's real identity), let's get down to the real business of finding out who all these actors are. And what they look like with normal clothes on.

Regé-Jean Page AKA The Duke

Regé-Jean Page is ridiculously good looking whether he's wearing a tailcoat or tux, as this insanely well backlit Getty image slash luxury watch advertisement illustrates. Playing the suave, caddish Duke of Hastings on Bridgerton, he previously scored a role on ABC courtroom drama For the People.

Younger heads will recognize Phoebe Dynevor as the Irish girlfriend of Nico Totorella's character Josh. She is just as charming on Bridgerton in the lead role of Daphne, her town's most eligible bachelorette and love interest to the Duke.

A veteran of stage and screen, Andoh has done stints on Doctor Who, Casualty and EastEnders. As Lady Danbury she's a Bridgerton standout, counselling the Duke after his troubled childhood.

Barker's character Marina accidentally disrupts the matchmaking plans of her aunt, Lady Featherington, when she appears one day and outshines all of the Featherington daughters. When she's not impressing the Queen with her manners and trying to trick men into marrying her, Barker is filming indie flicks like the upcoming How to Stop a Recurring Dream.

Without her colorful wigs, the Queen is giving chic MoMA curator. Rosheuvel has many stage and screen credits to her name, including the lead in a queered production of Othello.

Nicola Coughlan is a Derry Girls legend and much-welcome presence on Bridgerton, where she pulls off some of the most insane Regency costuming of the show in the role of Penelope Featherington.

When she's not seducing male heirs to family fortunes from the opera stage, Sabrina Bartlett can be found on Game of Thrones, Doctor Who and Knightfall.

All those slow walks around London would be completely boring without the wisecracking Eloise, played by Claudia Jessie. Elsewhere you can spot her on Doctor Who, Lovesick, and Vanity Fair.

Turns out that when he's not shooting Bridgerton, Jonathan Bailey swaps the cravats for some crunchy Patagonia. Gorpcore king!

Serving Julie Cooper on Bridgerton is Polly Walker, meddling mom to the Featherington clan. When she's not matchmaking, you can catch her on a host of British and US TV shows.

My personal favorite Bridgerton brother is played by Luke Newton, who seems like a very nice young British lad with a fun Instagram.

The iconic matriarch of the Bridgerton clan is played by Ruth Gemmell, who is no stranger to British period dramas and has the lead role in ITV series Home Fires.

We love a Prince. As well as the most eligible bachelor in London, Stroma played Ron's rival Cormac McLaggen in Harry Potter and the Deathly Hallows, as well as Dickon Tarly on Game of Thrones.