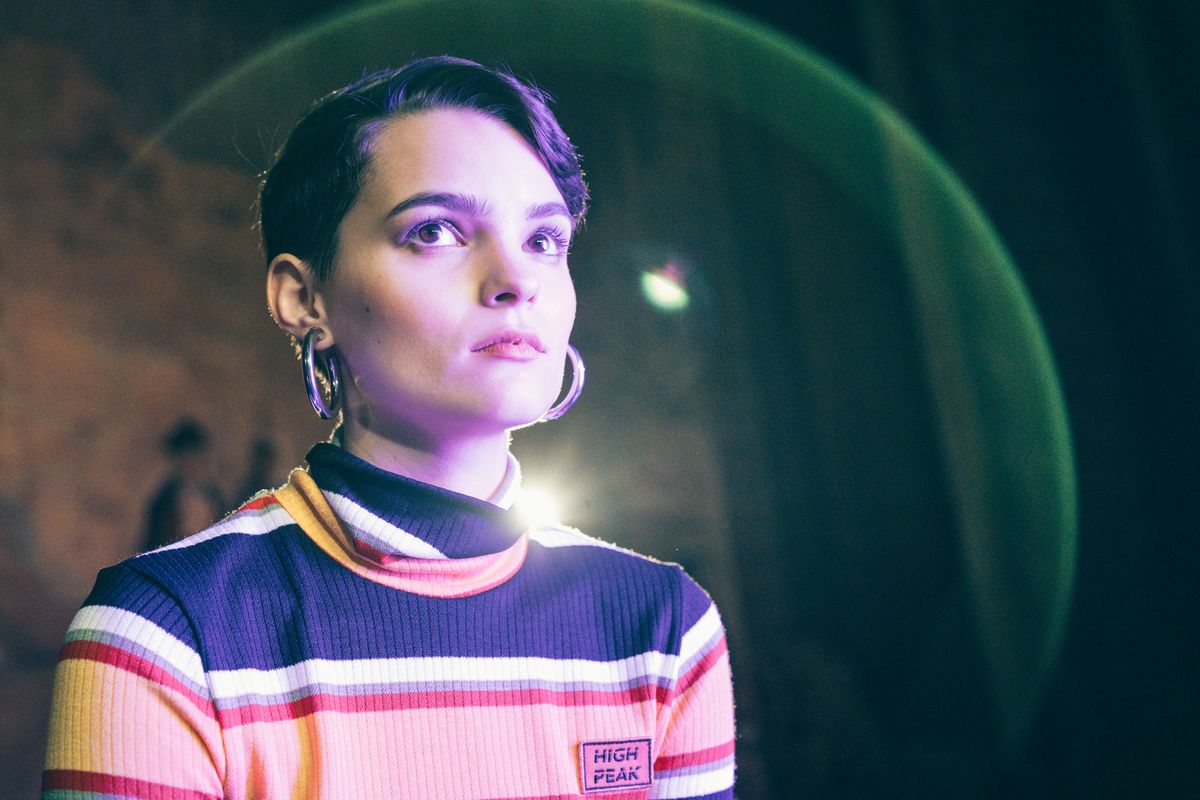 We've partnered with Zappos' The_ONES, celebrating classic sneakers, to bring you stories about creative, intelligent, strong and beautiful women who are all kicking ass in their own way. We knew it had to be for women, by women, and about women — and we wanted to accomplish this unapologetically. That's why we love the hashtag: #TOTALLYSPONSOREDBYZAPPOS.

There's no denying the "Marvel Mania" moment that we are in right now. In such uncertain times, everyone is looking for a hero, and the Marvel universe continues to bring their characters to life in a fashion that audiences not only enjoy, but identify with as well. And what's really inspiring about it all is that the actors playing these fictional superheroes are often just as inspiring as the onscreen characters they depict.

That's why we were so excited to work with Brianna Hildebrand, one of the stars of the upcoming Deadpool 2 (in theaters May 18th). She possesses the kind of understated cool usually reserved for seasoned actors who have been in the business for years. But at age 21, Hildebrand has only been in the business for approximately three years. Wise beyond her years, Hildebrand recently caught up with us in the historic Los Angeles Theater in Downtown LA to discuss power, music, and Resting Bitchy Face (RBF).

In your professional life you play powerful characters, but what about you personally? Are there moments that make you feel more powerful? A particular time of day?

I definitely feel more powerful in the mornings. I feel like the early bird gets the worm and I mean, obviously there are times when I don't wake up early, but the times that I do wake up early it's just like, "Oh yeah I got all day to do all the things that I need to do."

What about your clothing and your go to outfits? Are there things that you like to put on?

I have like seven rompers and probably the same amount of jumpsuits. If it's one piece and it's got pants on the bottom, I probably own it. It's my favorite.

What about sneakers? Are there any pairs of sneakers that come to mind that always make you feel comfortable?

I'm always in Converse. Which is weird, because I have a bit of like a shoe obsession. I buy so many shoes but I always end up wearing the same Converse every day.

Let's talk about your career. We love when we see you sing. What role does music play in your life?

Music has always been my first love really. I moved to LA wanting to pursue that and kind of fell into acting somehow by the grace of somebody in the sky. I still do love music. It's my first love and I do want to release music eventually. But as of now I've been focusing a little more on the acting. In the next couple of months I want to start performing locally and really get my toes wet doing that because that's something I've been itching to do for so long.

Okay so let me get this straight: you know how to kick ass, you are good at comedy and you're good at singing and songwriting. What do you think is the hardest?

It probably is harder to be authentic and vulnerable with music. I think it's hard to be authentic in general, especially in this industry. It's easy to kind of be bullied into becoming somebody else or allowing someone to change your own opinions about things just because you want that approval. So yeah, I think music is definitely for me the most difficult thing. Because if I'm acting, I'm being somebody else, I'm not worried about how other people are perceiving me or maybe judging my own personal work. But with music it's like I'm performing what I'm feeling and what are these people thinking about that. So it's a little more difficult I think.

Who are women that you look up to who you think are powerful?

I'm in love with Roxane Gay. She is a feminist black queer writer, and she also just so happened to write some of the Black Panther series. I'm obsessed with her. I almost got to see her at a convention a couple months ago and I was so sad that I didn't see her, but she's my first love.

Well now that you bring up comic books, let's talk about your next role. You're reprising your role as Negasonic Teenage Warhead in Deadpool 2. How do you prepare for a role like that?

Negasonic kind of reminds me of myself in high school, so I really connect with her on that level. I went through a goth phase in high school. I also went through a phase in my life when I was like "I don't know who I am. Who do I like? Why does it matter? you know?" I'm really excited to play Negasonic. I draw a lot from journaling. I journal for Negasonic a lot and that helps me get into character a little bit.

If you could choose one superhero power for Brianna what would that be?

It would be to be invisible so I could cut in lines.

I mean flying would be cool. I talked about this last night with my girlfriend. It was really difficult to choose but I think I would still choose invisible because... yeah, to cut in line.

What would you say to younger kids that are watching us? What would be the message that you would want to share with younger women that are looking up to you and watching you?

Probably just to do you. You know as hard as you can, just like do you. Because when you're younger it feels like everybody is watching you and everybody's opinion of you matters and I think the older everyone gets the less, they feel like that. But if you master it now, if you start living your life the way you want to now, it'll be so much easier for you and it'll feel so much more authentic and people will gravitate towards you for who you are and not who you're trying to be. So yeah, just do you.

What's something about Brianna that we would be surprised to learn?

Do people think you're mean?

I think so. Well, I mean I don't know. At conventions sometimes, they're all like, "Oh you're so like sweet and like excited to be here." I think people sometimes forget that I'm playing a character or they would maybe prefer me to be Negasonic, which is chill too, I relate to her sometimes. But I do also suffer from RBF, so that may be why people mistake me for being rude.

You are the complete opposite of rude. We think you're fantastic and can't wait to watch you kick ass in theaters this summer!

Check out our video adventure below!