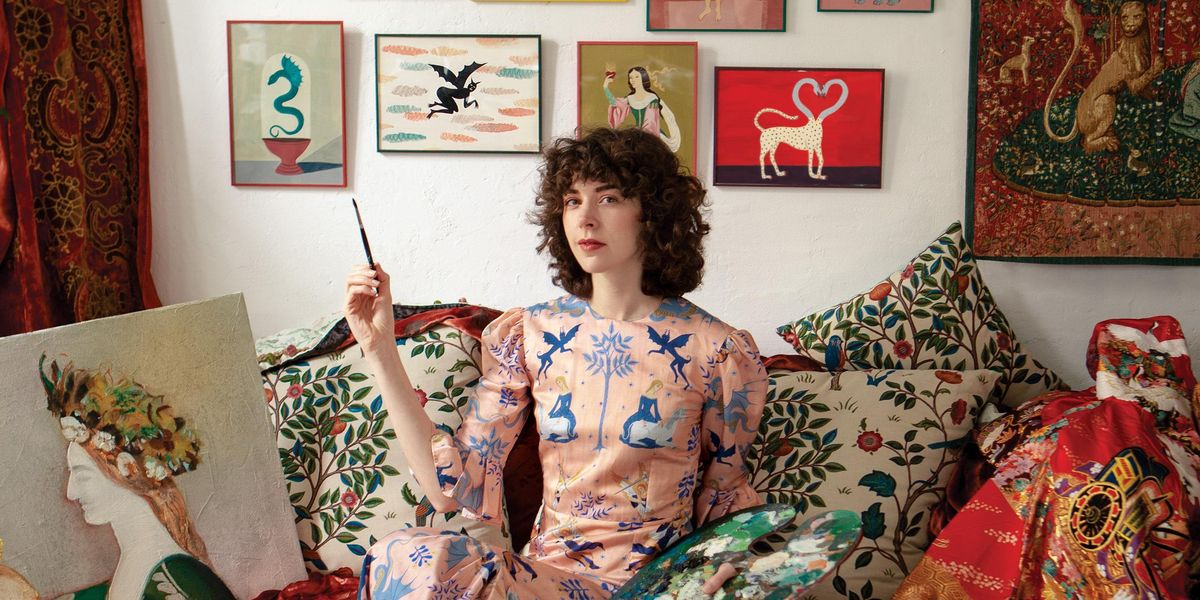 Everything about Brianda Fitz-James Stuart is visually stimulating. The Madrid-based artist and DJ always loved painting growing up and after 10 years working in the fashion industry decided to quit to devote herself full-time to her art. "It's been one of the best decisions I've ever made," she says. "Every project represents a challenge and makes me grow as an artist."

Fitz-James Stuart, granddaughter of the legendary late Cayetana, Duchess of Alba, is obsessed with nature, and her paintings often feature mythological animals and lush plants. She made her DJ debut at Madrid's iconic disco Nasty. "I took two CDs with me with two lists of 10 songs in each CD," she laughs. "It was scary and fun at the same time."

Below, Fitz-James Stuart talks being a multi-hyphenate artist, finding creative influences and her love of the Spanish capital she calls home.

When did you start doing art?

Since I had the use of reason, I remember painting. Art was my favorite class at school and I've always enjoyed every activity related to doing things with my hands. I studied fashion design in Spain and a year of painting in New York. After working for 10 years in fashion, mainly in print designing, I realized I was more interested in painting and illustration. Four years ago, I decided to focus on my art and it's been one of the best decisions I've ever made. Now I not only design prints for fashion brands, but also illustrate books, rugs, ceramics, watches, show cases, murals, wallpaper. Every project represents a challenge and makes me grow as an artist.

What are you favorite subjects to paint?

My basic source of inspiration is mother nature. There is nothing as beautiful and perfect. I'm also very interested in classical painting, mythology in general, medieval art, Italian renaissance, the Victorian era, the symbolism and magic that surrounds us.

You love painting plants and animals. If you were an animal which would you be?

I would definitely be a feline. I have a special connection with those marvelous animals. I think they are beings from a different world, so beautiful and enigmatic.

What was your first DJ job?

My first job as a DJ was in a legendary disco in Madrid named Nasty. A friend of mine named Miranda Makaroff asked me to play with her. I remember I took two CD's with two lists of 10 songs in each CD. It was scary and fun at the same time.

Do you remember the first music you bought or downloaded as a child?

The first tape I owned was the Grease soundtrack. I listened to it all the time. I also loved the Beatles. My favorite song was "Lucy in the Sky with Diamonds." When I was young, I also was obsessed with the film Yellow Submarine.

I have an eclectic style. I love menswear, prints, colors and fantasy.

Who are your favorite designers?

On the international scene, I really like the work that Alessandro Michelle is doing for Gucci. I flip out over Jacquemus. Among Spanish designers, my favorites are La Casita de Wendy, Palomo Spain and Juan Duyos among others.

You're Aries. Are you very interested in zodiac signs?

I love astrology! I consult my astral chart all the time. I enjoy it although I try not to let it overly influence me.

What's the best thing about living in Madrid?

I've always loved Madrid. People are really cozy. It has a huge cultural scene. Its light is precious and it's a very lively city, sometimes too much so. That's why I have to split to the country side often in order to get some work done and avoid temptations.