The Internet Eviscerates the Argument That 'Boomer' Is a 'Slur'

If you've been anywhere near the internet in the past few weeks, you'll likely have seen the phrase "OK, Boomer" pop up in reference to out-of-touch Boomers. And given the Gen Z/millennial rallying cry's popularity, like clockwork, a Boomer felt the need to complain about the sarcastic usage of the term — even going so far as to deign it an ageist slur.

Yesterday, a conservative radio host by the name of Bob Lonsberry made the unwise decision to share a gobsmackingly shitty take via Twitter, writing, "being hip and flip does not make bigotry ok, nor is a derisive epithet acceptable because it is new." The worst part though? Lonsberry referred to the designation as "the n-word of ageism." 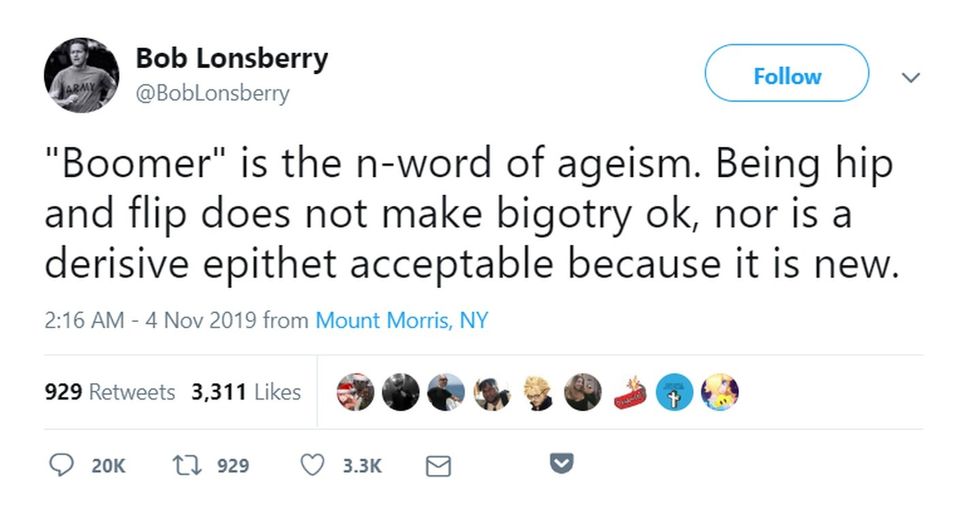 Naturally, it didn't take long for Lonsberry to get ratioed to hell, with everyone from comedian Travon Free to Blink-182's Mark Hoppus joining in on the conversation.

In fact, Dictionary.com even got involved and had to completely eviscerate Lonsberry via some extremely basic facts — something that, as one commenter pointed out, means "you have to log off forever and turn all your possessions over to the local library."

Their response? Uh, a brief mention of the ginormous distinction between a term that is "an informal noun referring to a person born during a baby boom, especially one born in the U.S. between 1946 and 1965" and "one of the most offensive words in the English language."

Boomer is an informal noun referring to a person born during a baby boom, especially one born in the U.S. between 1946 and 1965.

The n-word is one of the most offensive words in the English language. https://t.co/30OAf7N83e

Needless to say, Lonsberry has since deleted the tweet, but that doesn't mean you can't enjoy some quality roasts of his post — check out a few of our favorites, below.

My Boomer friends let me say it tho :/

if you’re a non-black person rapping a song, just replace the n-word with the word boomer