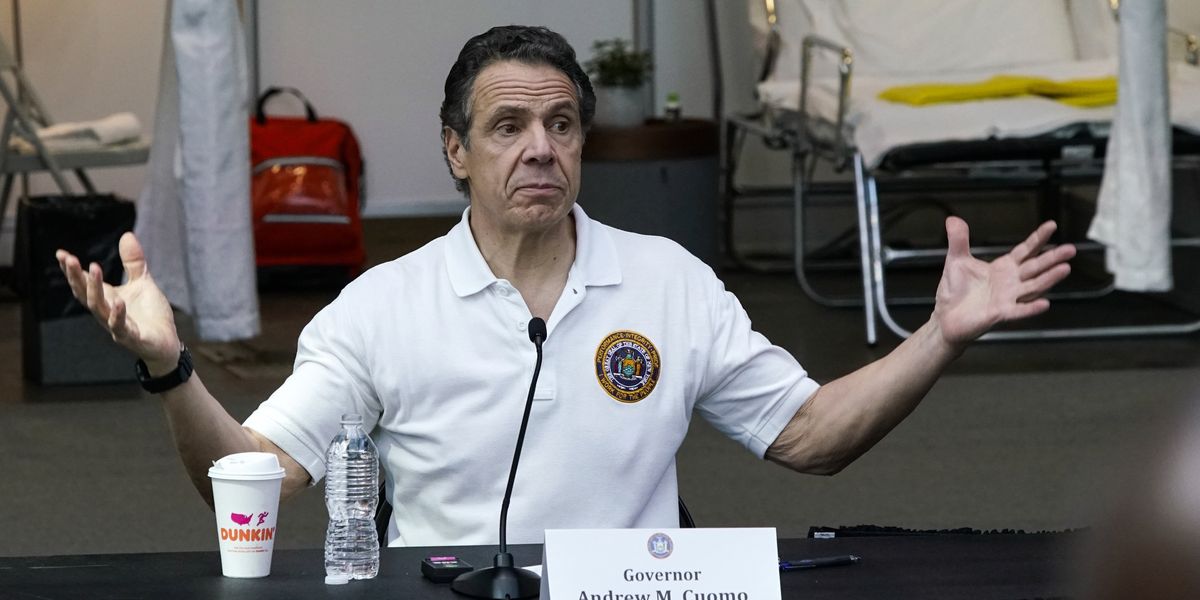 The Internet Wants to Know If Andrew Cuomo's Nipples Are Pierced

While there are plenty of good reasons for Andrew Cuomo to be under intense online scrutiny, I regret to inform you that the current discourse has less to do with his policies and more to do with a bizarre fascination with his nipples. Or rather, the idea that they're possibly pierced.

It all started yesterday when MSNBC producer Kyle Griffin tweeted out an op-ed from The Washington Post about what could be learned from gubernatorial responses to the coronavirus outbreak.

That said, the publication's choice of photo inadvertently sparked substantial online discussion about the strange way his white polo shirt appears to be clinging to his right nipple.

Gov. Inslee responded to Trump's comments that some governors are not grateful enough for federal assistance: "I don't recall, in the oath of office, saying, 'I'll do my job to protect the citizens of Washington state as long as I get enough love.'" https://t.co/EC7l5FsJN7

From comments about the "distracting" protrusions to prayers that it was just cold to an overwhelming amount of pained befuddlement, Cuomo's potential nipple piercings have gone viral — much to the chagrin of a number of Twitter users who expressed dismay over having to clean their search history.

Unfortunately, as one Reddit user pointed out, if the photos from Cuomo's Flickr account are any indication, "There's definitely something going on under there." So while the debate rages on, here's to hoping that this one is debunked as a "trick of the light," stat.

See what the internet is saying, below.

I thought this tweet was a joke but now I’m genuinely curious + really need to scrub my search history https://t.co/lEVujXKni7 pic.twitter.com/P7vWXVSiBN

every time i think my brain cant get any worse something like the phrase "andrew cuomo nipple ring" comes along https://t.co/D9raBs91O8

I realize this is off topic, but does Gov. Cuomo have pierced nipples or something? That photo is...distracting.

So... Is the NY State unemployment site not working for everyone else too, or is it just me.

I assume it's just me for making fun of Cuomo's nipple piercings in this photo. pic.twitter.com/DvIWJvE2uw