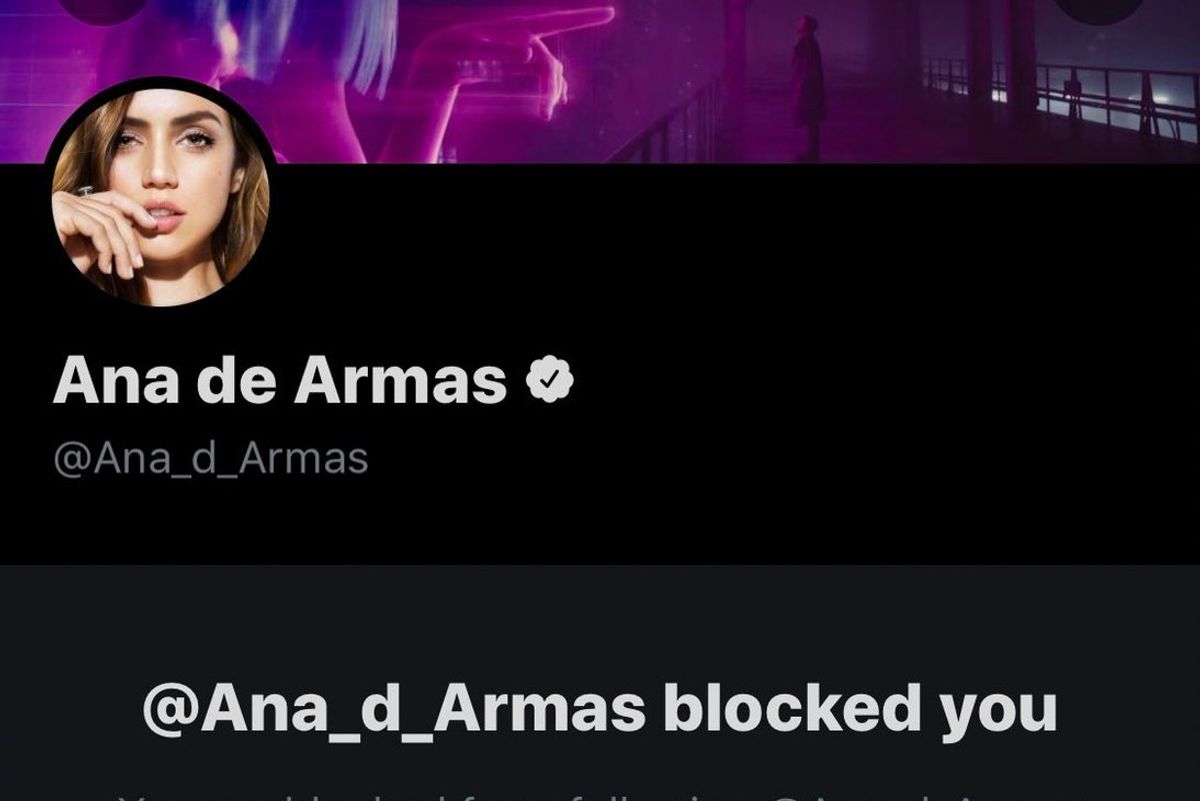 What Happens When Your Fave Blocks Your Stan Account?

Every stan wants to be noticed by the object of their affection. Sure, the sense of community on Twitter can be nice (see also: stressful, competitive, fueled by a complex system of reaction .GIF-heavy rivalries), but creating a stan account is really about getting those likes, replies and follows from a fave.

Some celebrities, notably pop stars like Charli XCX and Taylor Swift, have embraced their legions of passionate supporters, enlisting them to fight in various PR battles and push singles up the charts. They happily interact with passionate account admins online and even IRL, inviting a select few to secret listening parties or venmo-ing them money to pay for college. Others, uh, seem a little threatened. Such was the case earlier this week, when a fledgling account stanning Cuban actress Ana de Armas found itself... blocked?

@ArmasUpdates admin AJ, a 23-year-old Texan, went slightly viral when he tweeted out that de Armas had forsaken him. AJ describes himself as a "dedicated cinephile" who became an instant fan of the actor after watching her in Blade Runner 2049. He decided to start documenting her career after seeing last year's beloved Knives Out, and created the account in early November 2019.

Related | Meet the Bad Bunny Fan Who Painted His Nude

A rising star and upcoming Bond girl, de Armas recently scored a Vanity Fair cover off the back of her Knives Out success. But what she's best known for right now, during our current nightmarish moment, is a series of staged-looking pandemic paparazzi photos with her new beau Ben Affleck. At the time of blocking, AJ had been dutifully re-posting these cringey photo ops, which appeared to contravene LA's shelter-in-place recommendations. Unfortunately, the repetition didn't make for great content, and he started getting creative with captioning.

"There's only so much you can say about her leaving the house everyday without it getting boring," AJ tells PAPER. "I had to spice it up for the sake of my account. I wanted to have fun and was playfully teasing the aspect of their showy dog walks. I love how she doesn't care that paps are outside her house and she's going to serve a look no matter what, even if that means just going to pick up her dog's poop. I provided some lighthearted sarcasm in my posts towards her and Ben due to the fact that they were always outside and not following safety precautions in this pandemic that we are currently experiencing."

The sarcasm was clearly interpreted as shade. AJ is a little puzzled as to why de Armas (or perhaps her social media manager) took offense: the actor had only barely interacted with the account before by occasionally liking replies to AJ's original tweets, though never actually hitting follow.

"I never meant for my tweets to be mean-spirited or insulting," AJ says. "It was quite the opposite. I started to notice the tweets I made were making the rounds on Twitter and going viral in different places, which leads me to believe that someone that knows her notified her or her management team about the posts. I understand if she or they took it the wrong way, but it was always with good intentions." And for the record, he thinks the relationship with Affleck is for real.

If you're assuming that this incident is making AJ reconsider his dedication to Ana de Armas, then you don't know anything about stan culture. Actually, he's more enthused than ever. "I think this made me stan her more, strangely," he admits. "It's a power move, and I like a good diva." Another fledgling Armas updates account, @anadearmaspics, also found itself blocked by the actress yesterday after jokingly asking her to stay indoors, and is wearing it as a badge of honor. The account's bio now reads, "blocked by Ana ♡"

There's precedent for celebrities reacting negatively to constructive criticism from their most adoring stans — just ask the admin of Kendall Jenner hub @knjdaily, who called out her fave in the wake of that infamous Pepsi incident, then found herself blocked by the supermodel after putting two years of work into the 147,000 follower-strong account. Ultimately @knjdaily decided to unstan, and hasn't updated the account since.

AJ, meanwhile, is still hoping to heal the rift with de Armas. Despite a number of other stans urging him to pledge his loyalty to Kristen Stewart or Dakota Johnson instead. "My message [for her] would be that I believe that she is a fantastic talent and a beautiful person inside and out," he says. "Even though I have been absolutely joking around, I sincerely apologize that I offended her with my tweets."

By the way, Ben and Ana have finally started wearing masks on their daily walks.