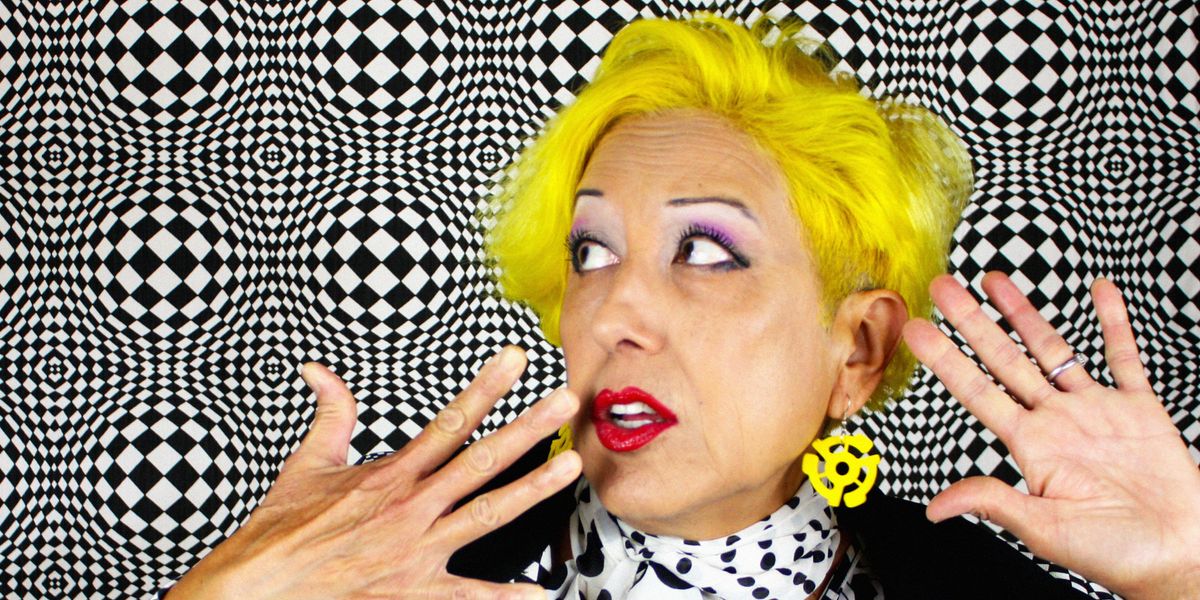 In her 20s, Alice Bag co-founded The Bags, one of the first Chicana punk bands. With her manic howls and gritty feminism, she electrified the East LA first wave punk scene in the mid-1970s. Since then, Bag has played in a dozen bands, became a teacher, written a memoir and several academic works. At 61, she's as electric as ever. She returned in 2016 with her self-titled debut solo album. Today, PAPER premieres "Spark," the latest single off her upcoming solo album Sister Dynamite due on May 8.

You can hear Bag's elementary school teacher and punk rocker sensibilities fuse on the joyous misfit anthem. "'I'm a little too strange, a little too kooky/ Sometimes I'm loud and weird," she sneers. "In my thrift store clothes and day glo hair/ Well I'm happy just to be queer." Later, she feigns regret that she couldn't pass as normal if she tried. The song has that rare quality of communicating something essential and profound in just a few chords and words. It's heartwarming, though Bag's edge never disappears completely. "Well my nose got banged up/ I breathe through my mouth," she sings. "So what, I stay alive."

"Spark"s music video walks the same line. Starring Vander Von Odd (Season One winner of Dragula), the visual follows the queen in full regalia walking around LA, shopping for records. On the way to meet up with her cohort of queens and freaks at the club, she gets followed, and has to threaten the creepy stalker with a broken bottle. Later, he looks on enviously as the queens laugh and dance. In the end, a convert to their church of individuality, he walks out of the club leading a gimp.

PAPER caught up with Bag over email to talk about quarantine, being a punk in her 60s and her new album.

What have you been up to lately and how are you doing in quarantine?

I've been doing a lot of self care. I am in the high risk category, so I'm being very cautious. I've sewn masks for my family, because they're the ones who occasionally have to go out for provisions. I'm mostly staying home. I try to eat healthy (except for the cookies) and since I'm not getting much outdoor exercise, I've started doing my own punk rock workouts and sharing them on IG and YouTube.

How did "Spark" come about?

This song is about me. I've always felt like a misfit but I learned to celebrate the things that set me apart and to love myself despite societal pressure to conform. I don't know if it's my appearance or my personality that gives me away but people always seem to pick up that I'm different. It used to bother me but it doesn't really get to me anymore unless someone is rude to me.

You've always been an iconoclast within and outside of punk. What does not dimming your spark mean to you today, at age 61 in 2020?

At 61, I'm still facing some of the same issues I faced in my youth, only I'm much better prepared to deal with them. People make assumptions about what someone my age should be doing. I remember getting angry because one particular editor wanted to call me a "punk rock grandma." I have no issues with my age, in fact I'm thrilled to be getting older, but I'm not a grandma, because my daughters don't have children. It pissed me off that someone would assume my daughters would naturally have their own children by now. Not all women have to or want to be mothers and not all older women answer to grandma. In the end, I spoke out and the line was amended. I think of my "spark" as my edge, the part of me that's unique and doesn't fit in. What makes us different also makes us special, it's a double-edged sword.

Tell us a bit about the story of this video. Why did you choose to star drag artists?

I am a fan of drag performers. I feel like drag queens take the idea of feminine beauty, deconstruct it, demystify it and completely destroy any preconceived notions of who is and isn't beautiful.

I reached out to director Rudy Bleu Garcia, who along with Hex Ray Sanchez, runs Club Scum, a favorite nightclub for East L.A. queer punks. Back in the early days of Club Scum, Rudy invited me to do a DJ set with Allison Wolfe (of Bratmobile). The turntables were in this tiny backstage area that doubled as the queens' dressing room. I literally bumped into Vander Von Odd in that little space and was soon smitten by this beautiful, charming queen. I'm honored that Vander agreed to star in this music video. The queerest of the queer, Dragula season one winner, Vander Von Odd truly embodies the message of 'Spark.' Except for the mouth breathing part — that's just about me.

What's inspiring your new album? What can we expect?

You can expect the types of songs that my band usually performs in a live setting. I kicked the ballads off of this record (I'll save them for a future project). I was really inspired by producing Fea's album No Novelties. All of their songs were upbeat and truly captured their live energy. I was in the middle of recording my own record when Fea and Blackheart Records reached out to offer me the producer spot for their second record, No Novelties. I put my own project on hold and I'm very glad I did. When I got back home, I went through my new song folder and made some adjustments. I challenged myself to refrain from adding all the extras. I've employed violin, cello, horns, and backing vocalists on past LPs but I never tour with those musicians so I wanted to strip things down to reflect the sound and energy of a live performance.