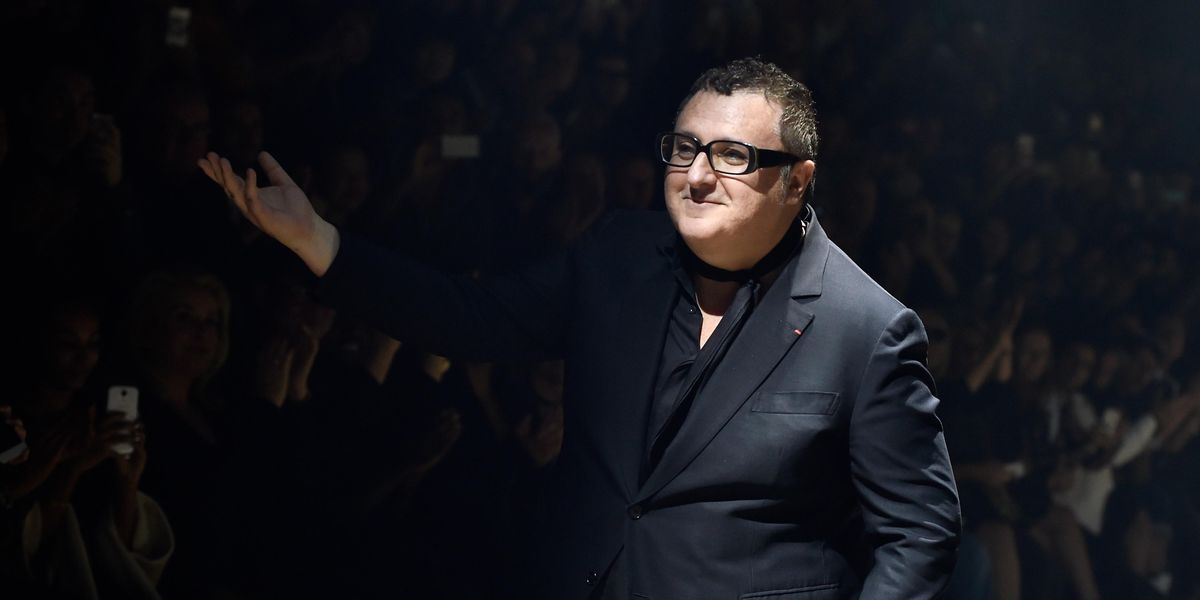 As news emerged over the weekend of Alber Elbaz's unexpected death from COVID-19, fashion people around the world remembered him as a uniquely talented designer whose 14 years at Lanvin were a golden age for the Paris fashion house. They also remembered him as the truly nicest legend in fashion. I agree on all counts.

Alber had a long history with PAPER. We first got to know him when he was working with NY designer Geoffrey Beene. Mr. Beene and PAPER Co-Founder Kim Hastreiter were close friends and collaborators who had a monthly lunch at The Odeon. Alber started joining those lunches and would sometimes come visit PAPER's Tribeca offices, sitting with us at the lunchroom picnic tables which had been donated by Todd Oldham.

Alber was always chatty, unpretentious and happy to talk to everyone. Over the years, he was genuinely sweet and humble — the antithesis of the stereotypical snooty, A-list fashion person. Whether at a small Barneys NY trunk show, where he narrated the looks as models walked among the guests, or dinner with friends, Alber was always down-to-earth and accessible.

When Lanvin opened their Madison Avenue boutique, they hired PAPER to help throw an opening night party/ Halloween costume ball that was one of the most fabulous parties I've ever been to. I had a special sort of batman headdress made for the event, which was inspired by the mourning look of the Empress Frederick. I wore it with a tuxedo and gorgeous Lanvin necklace. We made party favors like Alber masks that everyone had fun wearing.

That same week, Alber hosted the launch of his wildly successful Lanvin x H&M collaboration at the Pierre Hotel with Alber emcee'ing the show. Like everything else he did, it was fun and warm. The show was followed by a private shopping preview that saw the most powerful fashion people in NYC turn into deranged shopaholic fans, grabbing for the coveted pieces. I found myself in a tug of war over a dress until I realized the other person pulling on it was high-powered PR queen Karla Otto. I thought it better to let her keep the dress instead of risking never being invited to another fashion show again.

Most of my haul that night was Alber's signature draped dresses for women, so the next day when the collection hit stores I ran to SoHo's H&M to get more Alber goodies for myself. I found Harry Brant there, then 14, who had also been at the launch the night before, doing the same. Alber's work had that effect on even the most jaded fashion folks. I cherish all the Lanvin pieces I have, mostly from Ikram Goldman in Chicago — a longtime supporter and close friend of Alber. I wear them still, and always will and will think of Alber when I do.

A few years ago in Paris, TV reporter Alina Cho had a little birthday dinner after a long day of shows. Alber arrived late and asked to sit next to me, which was such a nice compliment. We hadn't had a good chat in awhile and caught up, talking nostalgically about the old NY days. We also talked a lot about being fat in the fashion world — something we both thought about a lot. The fashion world prizes thinness above all else and like many of us with weight issues, Alber sometimes felt he didn't fit in or wasn't able to really live the fantasy of fashion because of his size.

Hopefully, he knew he was loved and adored in every way by his friends and the women who wore his clothes. Alber brought warmth and joy to us all and he'll be sorely missed.