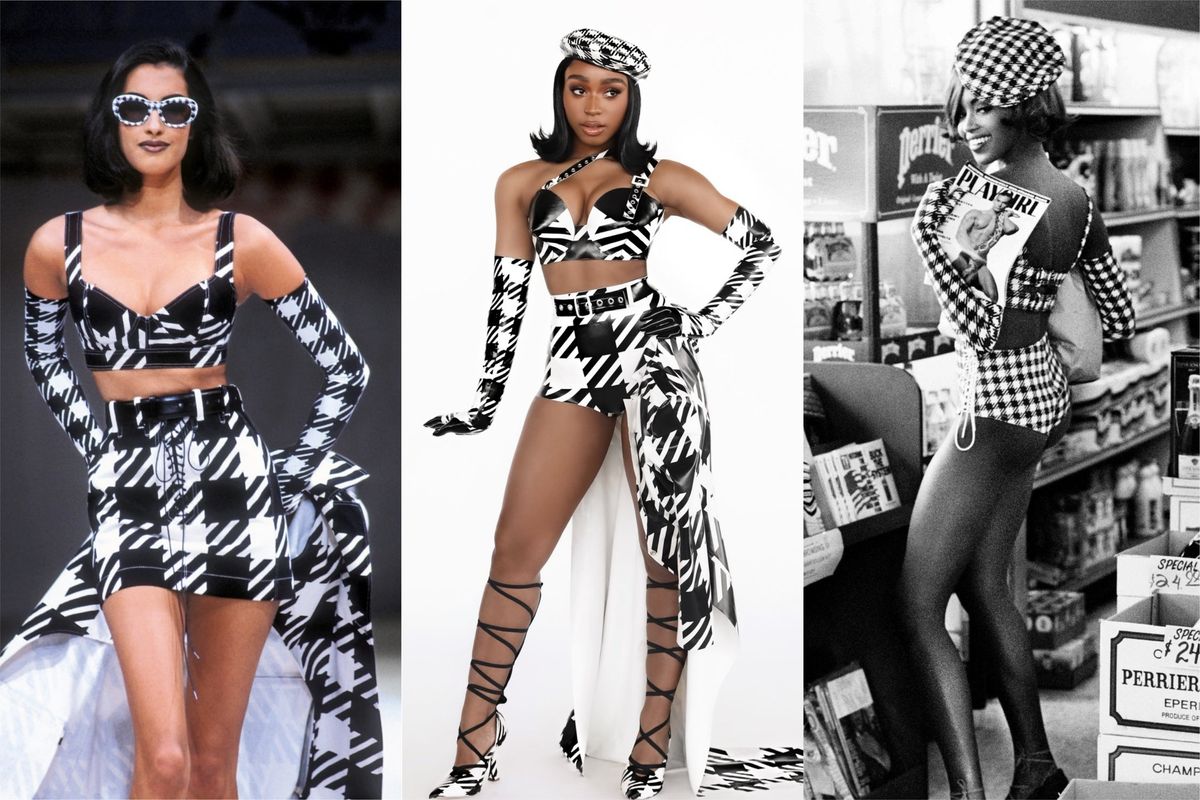 In one of the many highlights of Cardi B's "WAP" video with Megan Thee Stallion, Normani makes a surprise cameo in a black and white houndstooth getup with matching gloves and a beret. The look was a nod to Azzedine Alaïa's Spring 1991 Tati collection, which her stylist Kollin Carter has been "wanting to do forever," but was given an edgy twist thanks to the custom latex pieces Carter commissioned from Venus Prototype Latex, a fashion house in Los Angeles.

Some sharp users on Twitter quickly caught the reference to an Ellen von Unwerth photo of Naomi Campbell, who was dressed in a look from the aforementioned Alaïa collection. A Christy Turlington portrait by Patrick Demarchelier and a shot of Iman in full Tati were also among that collection's most significant.

Tati was a budget store in France known for its large bins where bargain hunters could dig through for inexpensive clothes. Its famous pink and white "vichy" check print facade caught the eye of Alaïa, who interpreted the print into oversized, stretch and head-to-toe renditions. Some of the biggest models at the time, including Helena Christensen, Elle Macpherson and Carla Bruni, walked his Spring 1991 show in these houndstooth and gingham creations.

"What excited me was to attach my name, and the world of haute couture, with this brand that represented bargain clothing and bargain prices," Alaïa said at the time. "When I would fly home to Tunisia, I would see travelers at Paris' Orly airport with huge Tati bags, full to the brims. I wanted to make something qualitative for this clientele, who couldn't afford designer clothes."

The Tati print went on to influence even more designers' collections, including Phoebe Philo at Céline, Marc Jacobs at Louis Vuitton and Demna Gvasalia at Balenciaga. An entire exhibition was dedicated to the Tati collection, which was curated by Olivier Saillard and ran in Paris from last summer until January this year.

Bella Hadid memorably wore a vintage Alaïa Tati outfit as well, when she ventured out to Tokyo for a press event in a pink Vichy print minidress. On resale sites like Vestiaire Collective and 1stdibs, Tati pieces like printed berets and dresses have gone for as much as $2,700, with one full look reportedly sold for more than $6,000.