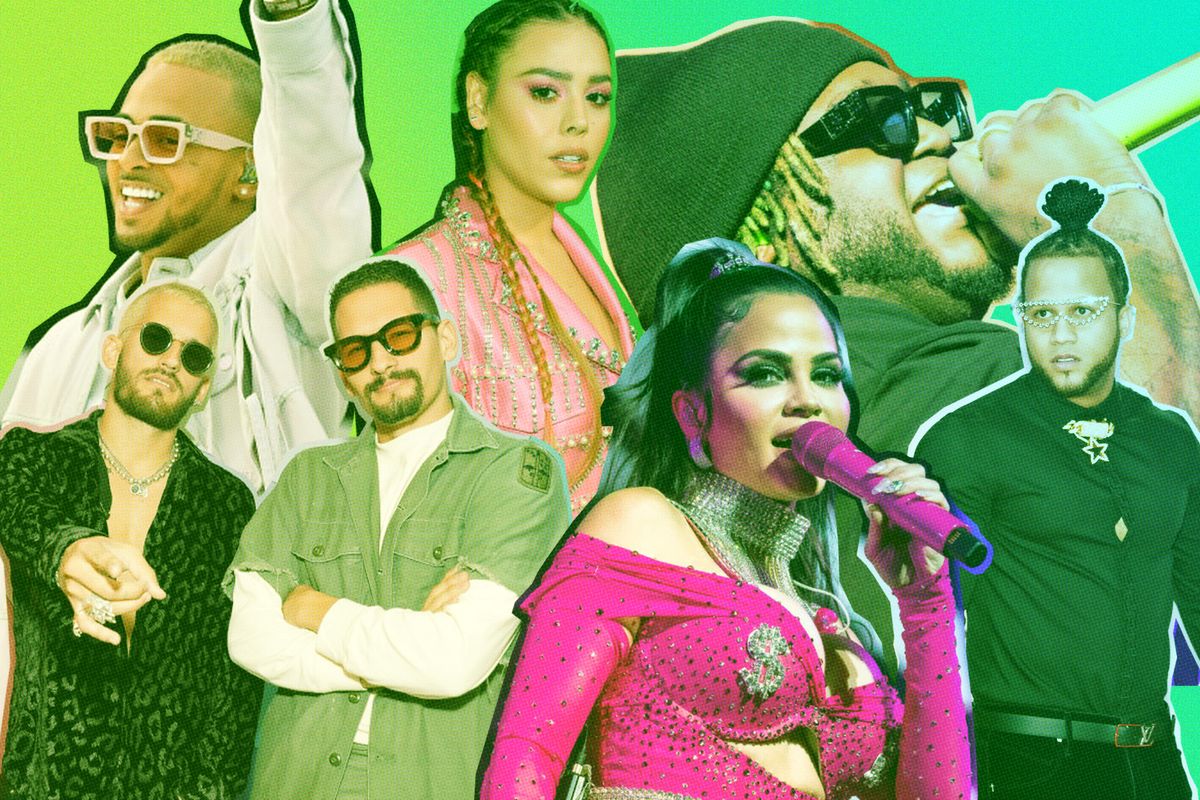 Before everything shut down due to the pandemic, we were treated to the greatest show on earth by two Latinx queens: Colombian superstar Shakira and Nuyorican icon Jennifer Lopez. They co-headlined this year's Super Bowl halftime show with music in English and Spanish to an impressive audience of 104 million viewers. It was the perfect kickoff for a new decade where the distinction between Latin and pop music is becoming increasingly blurred, and Latinx artists are making global crossovers.

Shakira and J.Lo's halftime show guest, Puerto Rican rapper Bad Bunny, made history in March with the highest-charting fully Spanish album on the all-genre Billboard 200 chart. His second solo LP, YHLQMDLG, peaked at No. 2 on the chart. In May, Bad Bunny revisited the top 10 again with his mixtape Las Que No Iban a Salir, which opened at No. 7. Fellow Boricua rapper Anuel AA cracked the top 10 a month later with his Emmanuel album hitting No. 8. As we're also seeing with the K-Pop hits, English is no longer a requirement to capture a global audience. Latin music is breaking through and breaking down language barriers.

All this is to say that the unprecedented success of "Despacito" during summer 2017 wasn't just a fluke. In late 2019, Latin music overtook EDM and country music as the fourth most-streamed genre in the US. You're already listening to Bad Bunny and Colombian superstars J Balvin, Maluma and Karol G. In honor of Latinx Heritage Month (September 15 — October 15), here are 12 more artists to watch.

Most of the faces of reggaetón music today are white, even though the genre was first developed as reggae en español by Afro-Latinx artists in Panama during the '80s and early '90s. When Panamanian singer-songwriter Sech reached No. 34 on Billboard's all-genre Hot 100 chart with the heartbreaking banger "Otro Trago," that was seen as a win for Black artists' representation in reggaetón and a reminder of where the sound came from. Sech sets himself apart with the soulful touch of R&B that he adds to reggaetón. On the all-star remix of "Relación" with J Balvin, Puerto Rican rappers Daddy Yankee and Farruko, and Spanish singer Rosalía, Sech remains the heart of his song. His collaboration "Qué Lastima" with Afro-Colombian hip-hop group ChocQuibTown highlights and celebrates the Black artistry in Latin music.

When Billboard revealed the 2020 midyear report for the most-streamed Latin music artists in the US, Mexican singer-songwriter Natanael Cano pulled in third place behind Ozuna and Bad Bunny. The 19-year-old is the leader of the corridos tumbados movement that reimagines the traditional Mexican corrido for the Gen-Z crowd. Cano flexes his designer fits while partying with lean and weed on "El Drip." Bad Bunny wanted a piece of that tumbados action, so he jumped on the remix of Cano's fiery "Soy El Diablo" last year. Corridos tumbados are becoming trap corridos as Cano recently blended the genre with Latin trap on his started-from-the-bottom anthem "Arriba." He shares the spotlight with fellow Sonora native Ivonne Galaz, the emerging female voice in tumbados, on their moving duet "Golpes de la Vida."

One of the biggest artists leading reggaetón music's second wave resurgence this past decade was Puerto Rican superstar Ozuna. His debut album, 2017's Odisea, is tied with Bad Bunny's first LP X 100pre for most weeks at No. 1 Billboard's Hot Latin Albums chart (46 weeks) among male artists. Ozuna was the first Latin music act that Dominican-American rapper Cardi B collaborated with on the tropical stunner "La Modelo." As a singer and rapper, Ozuna's enchanting voice fits on any track. Notably, France's DJ Snake tapped him for the explosive "Taki Taki" where Selena Gomez embraced her Mexican roots with him and Cardi. He's proudly Afro-Latinx, titling his latest album ENOC after his nickname "El Negrito de Ojos Claros." Ozuna remains the snack of reggaetón on his delicious smash "Carmelo."

Who was the most-watched female artist on YouTube in 2018? Taylor Swift? No. Ariana Grande? No. Dominican singer Natti Natasha? Yup, with over 4.52 billion views on her music videos at the time. The reggaetón music scene is less of a boys' club with Natasha as one of the leading women in the genre. She and Mexican-American singer Becky G have proved just how bankable women in reggaetón are with their knockout hit "Sin Pijama." The song impressively peaked at No. 70 on the Hot 100 chart. On her debut album IlumiNATTI, Natasha flexed her chops as an overall pop star with the empowering ballad "La Mejor Versión de Mi" and the bachata bop "Soy Mía" that reflected the sound of her Dominican roots. She's still got reggaetón in a headlock on her kiss-off anthem "Qué Mal Te Fue."

Venezuelan-born brothers Mauricio and Ricardo Montaner, Jr. were songwriters for artists like Mexican pop queen Thalía and Puerto Rican icon Ricky Martin, and they had a hand in penning Becky G and Natti Natasha's "Sin Pijama." After receiving a Latin Grammy nomination for Best New Artist in 2017, Mau y Ricky found their groove in reggaetón music. The duo's pen game shined on their breakthrough hit "Desconocidos" with Colombian artists Camilo and Manuel Turizo. With Karol G, they formed the "Lady Marmalade" of Latin music with the "Mi Mala" remix featuring Becky G, Dominican-American singer Leslie Grace, and Argentine pop star Lali. Now as their own hit-makers, Mau y Ricky are taking the genre to new places with the punk-influenced "Papás," a taste of their upcoming Rifresh album.

It's thanks to Mau y Ricky that we have Colombian singer-songwriter Camilo Echeverry, who goes professionally by his first name. In Medellín, he became a local celebrity after winning a Colombian version of The X Factor in 2007. When that part of his career ran its course, Camilo was ready to call it quits. Then Mau y Ricky heard his beautiful ballad "Medialuna" and invited him to their writing sessions, which included penning "Sin Pijama." That hit reignited Camilo's spirit and he signed a new record contract last year. As reflected in his giant signature stache, he knows how to blend his quirky pop edge with today's reggaetón sounds. Camilo's spritely voice can work its way around the sensual "No Te Vayas," the adorable AF "Favorito," and the sweet "Tutu." He received a Shakira cosign when she jumped on the "Tutu" remix.

Argentine singer Lali Espósito, who goes professionally by her first name, has over a decade in the music game, but she didn't break the global market until the release of her 2018 album Brava. In 2007, she started out in the band Teen Angels on the local telenovela Casi Ángeles. Lali later went solo in 2014 with her debut album, A Bailar, and became Argentina's pop princess. With her feature on Mau y Ricky's "Mi Mala" remix and key collaborations on Brava, the name Lali is becoming known beyond her country. That includes the five-alarm club banger "Caliente" with Brazilian superstar Pabllo Vittar and "Lindo Pero Bruto," her himbo-indulging anthem with Thalía. Lali can still do bad all by herself on "Besarte Mucho," her freaky bop that impressively blends reggaetón, Latin trap, and salsa music.

Like Lali, Mexican pop princess Danna Paola started out as a child actress. She released some music related to those projects, but didn't become a serious contender until 2013 with "Agüita": what her fans call Mexico's gay national anthem (penned by queer Chilean singer Javiera Mena). She recently became a global force after starring in Netflix's Élite series. Now that she's graduated from that role, her music has gotten stronger with this year's SIE7E+ EP. Paola doubles down on her support for the LGBTQ+ community with "Sodio," her sultry song where she loses her man to another man. Her work in quarantine remains top notch, including the irresistible "No Bailes Sola'' with Colombian heartthrob Sebastián Yatra and a Lali collaboration that's on the way.

With the rise of reggaetón and Latin trap music, dembow is also coming to the forefront from the Dominican Republic thanks to local rapper El Alfa. Bad Bunny was one of the first high-profile acts to tap El Alfa in 2018 for their collaboration "La Romana" from his debut album X 100pre. A wolf's howl signals the sudden shift from Latin trap to all-out dembow on the beast of the banger. Last year Diplo's Major Lazer and J Balvin turned up the heat with El Alfa on "Que Calor." Reggaetón, dembow and a sample of the cumbia classic "Curura" collide on the frenetic club anthem. The genre gets its shine on El Alfa's latest album El Androide featuring "Coronao Now" with Colombian-American rapper Lil Pump. El Alfa's breakthrough hit drills itself in your head and apparently got into Vin Diesel's. The actor jumped on the remix.

Argentine singer-songwriter Juan Ingaramo rose to international prominence last year thanks to a Latin Grammy nomination for Best New Artist, for his 2018 album Bestseller. That was his third album following 2014's Pop Nacional and 2016's Músico. The title of Ingaramo's first LP describes his eclectic sound that he calls "national pop." His best work is coming from the post-Bestseller singles. There's the ode to his wife "Romeo y Violeta" that beautifully blends bachata music and Latin trap, his homecoming anthem "El Campeón" with a reggaetón kick, and his modern take on the Argentine cuarteto with the R&B-influenced "Cambias Mi Amor." Legendary Mexican group Los Ángeles Azules recently enlisted Ingaramo's smooth voice for two of their cumbias, "Acariñame" and "Ay Amor."

One of the most promising new artists in reggaetón music, Colombian singer Manuel Turizo found success in 2017 with his debut single "Una Lady Como Tú." The music video has been viewed over 1.4 billion times. The 20-year-old is signed with La Industria Inc. and working under the wing of Puerto Rican OG Nicky Jam. Turizo's songs are uniquely punctuated by the ukulele from his older brother, Julián Turizo, who he also records, writes, and performs with. Manuel's deeply rich voice is a draw on hits like the magical "Vaina Loca" with Ozuna, the sexy "Déjate Llevar" with Spanish DJ Juan Magán and Mexican pop star Belinda, and the playful "Pegao" with Latin boy band CNCO. More recently, he's harnessing the heartfelt side of his voice on the tropical ballad "Quiéreme Mientras Se Pueda."

Boricua rapper Myke Towers represents the best of Latin hip-hop right now. With his loose and malleable flow, he can fit on any Latin rap, reggaetón or Latin trap song. Ozuna enlisted Towers on the hell-raising "Enemigos Ocultos" with Boricua OGs like Wisin and Arcángel and he tore it up. Towers is the go-to for Latin pop stars to heat up their tracks like with Thalía's lit "La Luz" and Prince Royce's alluring "Carita de Inocente" remix. On his latest album Easy Money Baby, Towers makes a sample of 50 Cent's "21 Questions" his own with "Girl." As an Afro-Latinx artist, he makes a powerful statement with "Michael X." While dressed as Malcolm X in the music video, Towers unloads about the racial inequity and injustice Black people face and the political unrest in Puerto Rico while giving the late Kobe Bryant a shoutout.