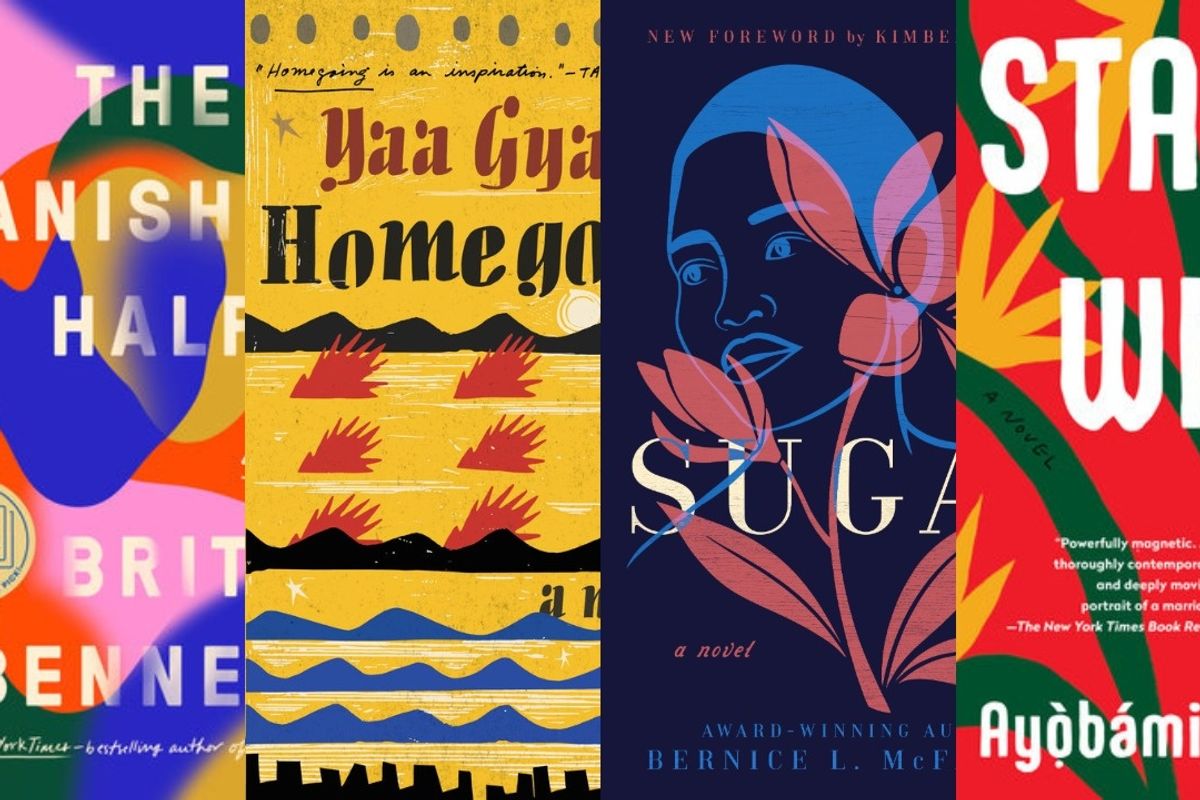 10 Books by Black Women to Buy This Saturday

The book publishing industry is overwhelmingly white, so it won't surprise you to know that most of the books being published and marketed are white as well. What does that mean for Black authors? They're being paid less, and their books are being put on the back burner. They are not given the same marketing dollars to succeed. They aren't being stocked in major bookstores. The cycle continues year after year, but recent viral hashtags like #PublishingPaidMe have been forcing difficult conversations about racial inequality on the shelves.

This week #BlackOutBestsellerList is challenging book lovers to buy at least two Black authored books by this Saturday June 20, in an attempt to take over the entire New York Times bestseller list. I run the Bookstagram @chocolatecoveredpages, and have compiled a list of some of my favorite books by Black women. Scroll through below and purchase from local indie sellers.

Sugar is the story of a sex worker who moves to small town 1950s Arkansas. Much to the town's dismay, she bonds with her neighbor Pearl and they form an unlikely friendship. Sugar is the book that will reignite your thirst for reading if you have been in a slump. This book has unforgettable characters, so much laughter and plenty of sadness. It is one of those hidden gems that make you search for This Bitter Earth, which is the sequel, and every other book in McFadden's catalogue.

In eighteenth-century Ghana, two half sisters are born to different villages. One is married off to an Englishman and lives in comfort, while the other is sold into slavery. We follow generation after generation of both of their family lines to see how each of their lives have been shaped by history. Gyasi takes us from the plantations, Civil War, British colonization in Ghana, to 20th century Harlem. Even though each chapter is a different character in a separate time period, you're compelled to keep reading.

The Vanishing Half Brit Bennett

In a town named Mallard made up of only fair-skinned Black people, identical twins Desiree and Stella run away together. Years later, Stella is living life as a white woman while Desiree has returned to Mallard with a dark-skinned daughter. The main focus of this story is on the different paths the twins took and how this affected their childrens' lives. The character development is excellent, and you will fall in love with the side characters as much as the major ones. This book is eye-opening, emotional and sometimes painful — but very much needed, and Bennett pulls us in from the first page.

Stay with Me Ayobami Adebayo

Set in Nigeria, this is the story of married couple Yejide and Akin. In the beginning it was agreed that Akin would only have one wife and that polygamy was not for them. However, after four years of infertility Akin decides to marry a second wife. Yejide becomes desperate to get pregnant and save her marriage, which results in a huge sacrifice. This book is heart-breaking, very emotional and demands all of your attention. At only a little over two hundred pages, it packs a punch. Even though you see it coming, it's hard to stop it.

Translated from the French language in 1994, this is the story of Tituba, an enslaved Black woman who was the first to be accused of witchcraft during the Salem Witch Trials. All we get in historical texts are fragments of the trial. We get a small glimpse of her in Arthur Miller's play The Crucible, but here Conde finally gives Tituba a voice. This novelization of Tituba's life that tackles racism and intersectional feminism is an extremely important read. Even though this book is classified as historical fiction, a lot of Tituba's struggles still ring true for Black women today.

The Warmth of Other Suns Isabel Wilkerson

We learn about many immigration stories in school growing up. This is about a migration that is scarcely taught. This book is about the Great Migration, where six million Black people migrated from the South to the urban Northeast, Midwest, and West between 1916 and 1970. This is non-fiction that reads like fiction. We follow three Black people: Ida Mae Gladney, George Starling and Robert Foster. We watch them take nail-biting yet hopeful journeys towards a better life for them and for their families. This book is, in short, an epic masterpiece.

From the first page we learn that Essun has come home to discover that her husband has murdered their son and kidnapped their daughter. The journey to find her daughter begins. The magic in this world is ground-breaking. Literally. Orogenes can shake the ground and move particles using the elements around them. This book is a fantasy lover's dream. With epic world-building, a very unique magic system and excellent character development, you'll want to pick up book two in the series immediately.

In The Revisionsers we follow Josephine, who escaped slavery as a child using spiritual powers from her mother, and now has a fully thriving farm in the year 1925. A white woman befriends her but eventually gains ties with the Ku Klux Klan. Almost one hundred years later, we also follow Josephine's descendant Ava. She moves in with her white grandmother who goes from helpful to harmful as the book goes on. We see how these two Black women channel the strength passed to them from their ancestors to get through the toughest times. Filled with so many quotes to live by, this book is hard to put down once started.

This is the story of two Black women who grow up thick as thieves in a close-knit Black community called The Bottom. As they get older, Sula and Nel begin to go their separate ways, with Nel deciding to stay in the community and make a family and Sula leaving the town to go to college and explore life outside of The Bottom. When Sula returns to their small town, she is shunned by the women in the community for not following the pack and is seen as a threat. This story sheds light on the expectations of being a Black woman in America. It is only about two hundred pages, but will leave you emotionally spent.

It is the 1930s, and Janie just wants to be her own person. Not what any of her husbands want her to be: seen and not heard. We follow her through three marriages trying to find herself. This book is a love letter to Black women everywhere and should be required reading. It is considered a Black Classic, as it should be. The themes in this book are still very much relevant today.