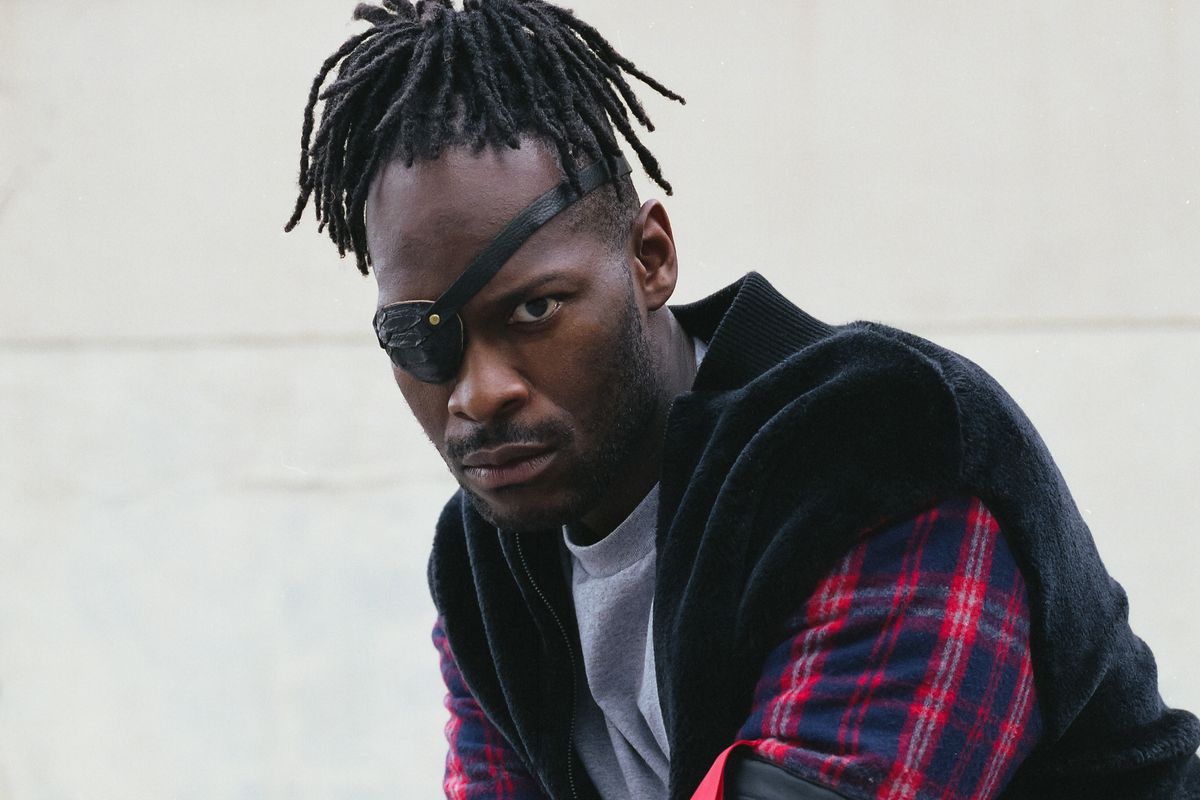 "You can't beat me, I'm a dancehall king/ Yeah, I been around the world and I'mma do it again, snarls Zebra Katz, aka Ojay Morgan, on his new single "IN IN IN." The rapper doesn't miss a beat of the rapid fire flow, before slowing things down to paint a vibrant self-portrait. "I'm a head-bangin', dreads-havin', hair-swangin', pants-saggin', ass-shakin', feet-stompin'/ Is it all over over my bass?/ I want that nerve-workin', head-jerkin', neck-swervin, toe-tapping, head-bopping, beat-dropping stank all over my face."

The New York-born, Berlin-based artist broke through in 2012 with his ballroom-inspired hit "Ima Read." The minimal, menacing song pays homage to the friendly shittalk of competitions like those seen in Paris Is Burning. It caught ears around the world, including those of Rick Owens, who used it to soundtrack his Paris Fashion Week runway show that year, and Busta Rhymes, who (along with over 70 other artists) put out a remix.

Katz came up alongside Mykki Blanco, House of Ladosha, Le1f and Ms Boogie (formerly Jay Boogie) when discussions around rap's male-domainated heteronormativity were just beginning. As such, conversation around him stalled on the fact that he was an openly gay rapper.

Now, he says "the term 'queer rap' is so 2012." It's been six years since his last album, Drkling. In that time, things like Pose and RuPaul's Drag Race have made previously obscured parts of queer culture mainstream, but also eliminated some of the novelty that obscured the nuance of work by artists like Katz.

With "IN IN IN," he reintroduces himself to a music world (hopefully) more ready to see a full picture. The track's frenetic pacing is readymade for dancefloor convulsions, but chilled out by the blasé cool of Katz' largely monotone flow. He journeys through the themes that have defined his music: club posturing, existential questions about music and his career, longing for love, and declarations of his identity. It's an exciting start to a whole new era.

PAPER chatted with Katz about "IN IN IN," the term "queer rap," and what he's been up to.

This is your first new single in years. What have you been up to, and what got you back into the studio?

So from 2012 through 2017, I toured consistently between Europe and America while residing in Brooklyn. Early in 2017, I recorded and went on a year-long world tour with the Gorillaz. Before joining the tour I relocated from New York to Berlin, since 80 percent of my live performances were in Europe. I spent most of last year taking my first official year off from constant touring. I had time to reflect, practice self-care, isolate myself enough to focus on music and adjust to living in Germany. Let's say the time off was much needed and well spent.

Since I mostly write and produce in the comforts of my bedroom studio, I'm constantly working on music or doing administration work for ZFK Records. I can't get away from it, actually.

The song feels like sort a mission statement as you reintroduce yourself. What inspired it and what story about you is it telling?

This single is very much a re-introduction to the music sphere. "IN IN IN" is a sonic reflection to how I see the world. I'm taking ownership of my narrative. While doing so, I want to explore social issues surrounding race, sexuality, and the black experience. I wanted to stay true to the minimalistic style that introduced me to the world while also taking a sonic risk and evolving as an individual and musician.

I wanted to tell a story in a fun, energetic way while still touching on issues of everyday life. To me, it's a grandiose dark dance anthem with elements of house, ballroom, and Qgom. I hope it leads my listeners back into the Zebra zone.

The conversation around queer music has changed drastically since you started out. How do you feel about re-entering that conversation now?

The term "queer rap" is so 2012. I'm more into the conversation that touches on why "rap" is the only genre of music to be sexualized in this way. I think Lil Nas X is a great example of why we need to let Black artists just be different. I'm beyond proud of him and his musical accomplishments.

Can we live? Can we... just like... make "music" or whatever? I'm definitely writing a book on this topic in 10 years once the topic has cycled out a bit. There always has and will continue to be artists who naturally break norms and forge their own path. I'm with them, they deserve to be celebrated for their work.

Is this leading off a larger project? Can you tell us a bit about what you're working on now?

I'm currently looking to collaborate with other artists. This year I also plan to release music from JerVae Anthony on ZFK Records.

What are you listening to these days, that's inspiring your own work or in general?

Here's a playlist of some tracks I've been listening to while getting ready to release this single.