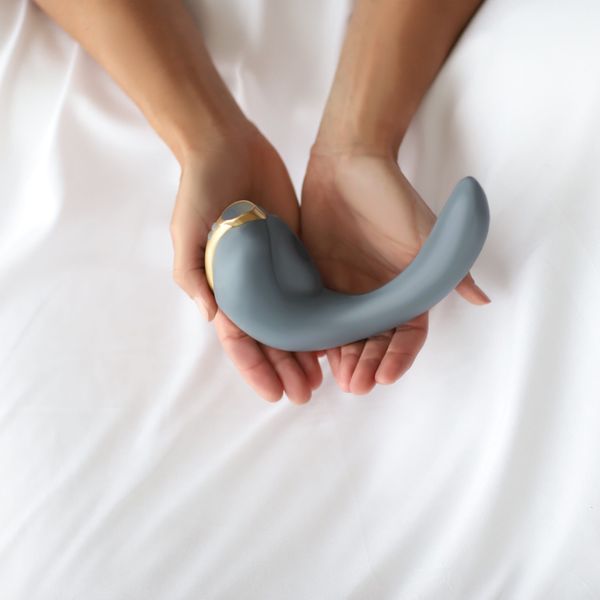 Granted, the sex toy industry has always been somewhat geared toward those with vulvas, apart from things such as primarily femme-presenting sex robots or the Autoblow AI, which utilizes machine learning to improve the blowjob experience. However, given the issues we face in relation to the (mostly heterosexual) female-male orgasm gap, not to mention mainstream porn's prioritization of the male gaze, it seems like the right thing at the moment is to prioritize conversations about improving upon vulvic orgasms, especially given American sex culture's not-so-secret aversion to female pleasure. Thankfully, things appear to already be improving in terms of society's skittish approach to the female orgasm, and you have a handful of innovative, women-led companies to thank for that.

Just take the success story of sex toy company Lora DiCarlo, which made headlines earlier this year after their Osé Robotic Massager (pictured above) had its CES Innovation Award in robotics suddenly rescinded due to the product being "immoral, obscene, indecent, profane" — despite the groundbreaking technology holding eight patents with applications not even necessarily exclusive to sex toys. Thankfully, after much outcry over the obvious gender bias of the situation, the award was recently returned to Lora DiCarlo with an apology from the governing body behind the event. Even better? According to founder Lora Haddock, in addition to securing $2 million in funding from investors in the wake of the incident going viral, the Lora DiCarlo team is also working with them to "help them with some of their gendered language," "how to create a safe environment for all genders," and "create that conversation not just around gender, but sexuality and sex, as well."

"We've created this social mission that really boosts gender equity," Haddocks says, before adding that the company's triumph is largely thanks to the large number of (primarily) women who supported them. "A surprising amount of people rallied behind us. It wasn't us who made the change alone."

Lorals founder Melanie Cristol also recalls overcoming a similar experience with overt gender bias while developing her flagship product: a single-use, latex panty meant to encourage the "80 percent of [people with vulvas] who turn down oral sex for various reasons" (body dysphoria/dysmorphia, physical discomfort, being on your period, etc.) to take part in what research has proven to be "the most pleasurable sexual activity" for them.

After a long research and development process, Cristol went in search of a condom factory with the capacity and appropriate machinery to help produce a product she wanted to sell as something that was "going to change the world and help millions of women enjoy oral sex." And though one US-based condom company was initially "very interested," Cristol says that after she specified that it was "an extension of a dental dam that will stay on while performing oral sex on a woman," she was unceremoniously "ghosted" by the company.

"Eventually they told me that they talked it over with the board, and the board was uncomfortable with the nature of the product," Cristol says. "It's kind of a recurring thing that comes up. A lot of people are comfortable the concept of vaginal intercourse, but when it comes to oral sex, I think there's an additional layer of taboo — particularly oral sex for the pleasure of women."

Thankfully, Cristol eventually found an overseas manufacturer willing to take on the project and is currently in the process of expanding Lorals' line of products, which will hopefully soon incorporate transparent and STI-prevention models. That said, while talking to both Haddock and Cristol, it was obvious that the common denominator between both these stories was their determination to overtly go up against the status quo and stubbornly push forward — all in the name of gender equity.

However, it's obvious that this kind of action, as well as the seemingly endless innovations happening within vulvic-centric sex tech at this moment, likely wouldn't have been a thing even just a few years ago. So then, what exactly has changed? According to both Haddock and Cristol, you can thank the #MeToo movement.

"With the advent of social media and the internet, people are more empowered to speak up for themselves and talk about these issues."

"We're at a point where society doesn't put up with that shit anymore, and with the advent of social media and the internet, people are more empowered to speak up for themselves and talk about these issues," Haddock explains, while also pointing toward the fact that Lora DiCarlo's viral CES story garnered almost 20,000 shares alone on social. "People feel heard and feel like there's a sense of camaraderie — that there are people out there who understand them. That they're not alone."

For her part, Cristol also agrees and adds that thanks to the empowering rhetoric of #MeToo, she's noticed that people are much more eager to "take ownership of their sexuality."

"[It's about] defining exactly what you want in a relationship or any kind of intimate activity, and realizing that that is yours' to decide," she says. "This has led to outpouring of so many different products that help women and all kinds of people enjoy their sexuality."

That said, Haddock also adds that Lora DiCarlo getting its award back isn't the end of the fight. Instead, she hopes people won't just stop at sex tech innovation and continue to tackle other questions surrounding gender parity in a similar fashion.

"It's not necessarily about just talking about things, it's about true policy change and making change," Haddock concludes. "I think we'll start seeing that within not just the sex toy sex realm, but... across the board in tech and other industries other than just tech and business." And, honestly, amen to that.