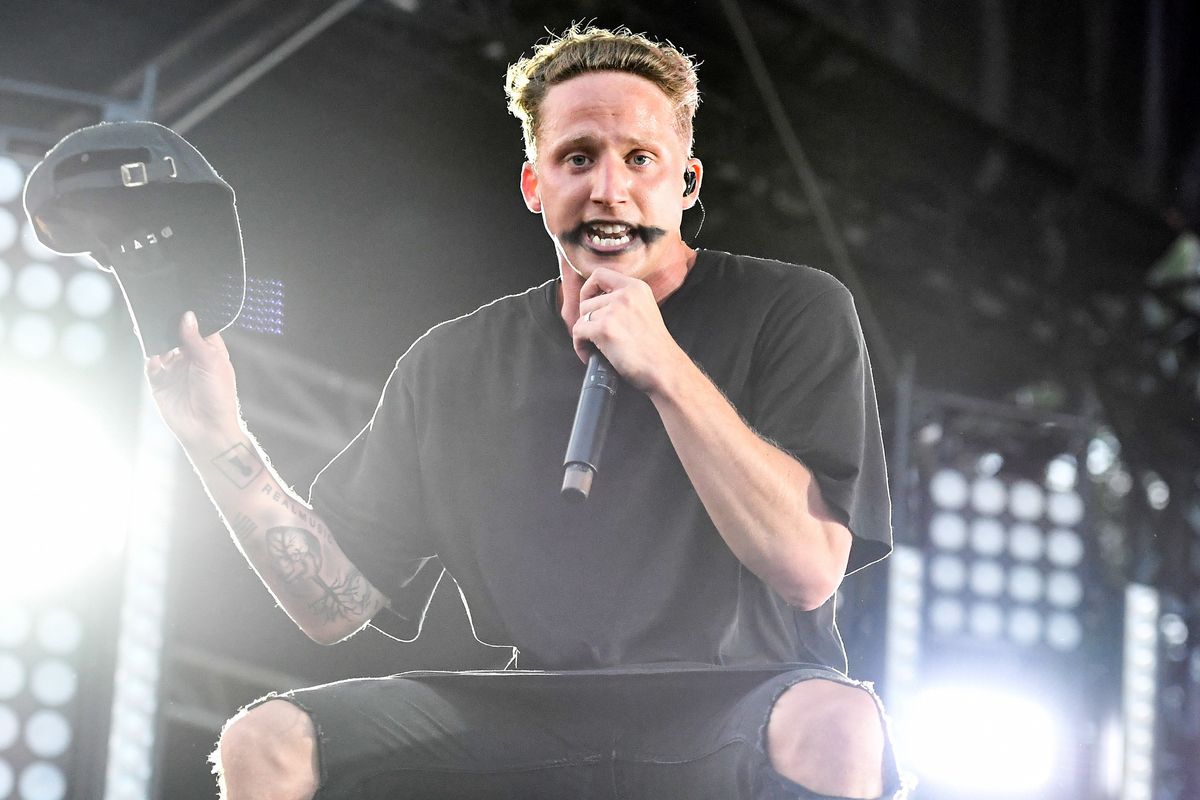 Who Is NF, the Christian Artist Who Nabbed Chance the Rapper's No. 1?

Earlier this month, Chance the Rapper released his debut album The Big Day. As the full-length follow-up to his acclaimed mixtapes Acid Rap (2013) and Coloring Book (2016), it was expected to be his magnum opus. The project included an expansive list of eccentric, big name collabs (Death Cab for Cutie, Nicki Minaj, John Legend, CocoRosie, Shawn Mendes, Gucci Maine, DaBaby, Taylor Bennett, En Vogue, SWV, gospel icon Kiki Sheard), co-production credits from Chance on every track, and an updated set of the artist's signature vulnerable, joyous, cozy raps about his life as a dad, newlywed and a Christian. It's gotten mixed, but overall positive reviews, heralding it as a defining piece of gospel-rap and a statement of a new era of Chance.

Despite all the hype, The Big Day missed its anticipated Billboard Hot 200 No. 1 spot, landing at No. 2 behind an artist you've never heard of, and ironically... another Christian rapper.

The Big Day debuted behind the current No. 1 album: The Search by an artist called NF. Chance's record hit the charts with 108,000 equivalent album units moved, behind NF's 130,000. Ed Sheeran's No. 6 Collaborations fell to No. 3 and Billie Eilish's When We All Fall Asleep, Where Do We Go? dropped to No. 4, behind both rap albums.

We'll say it: who is NF and how did he out-chart Chance the damn Rapper? Here's what you need to know.

NF is Nathan Feuerstein: a 28-year-old white rapper from Michigan, and by some calculations, the best-selling Christian artist in America. Although he doesn't like the term "Christian rapper" ("If you're a Christian and you're a plumber, are you a Christian plumber?" he told Idolator), he was the first hip-hop artist ever signed to Capitol CMG, Universal's Christian sub-label in 2014, where he's still signed.

Feuerstein started out solidly in the Christian music world, but his appeal has become increasingly diverse — and he's made conscious efforts to establish himself first and foremost as a hip-hop artist. "I think I've made it very clear now, particularly on this second record, that I'm a hip-hop artist" he told Idolator in 2016 around the release of his album Therapy Session.

Also, probably fans of "rappers" Logic and Kyle, who he toured with last year.

Who listens to him?

A whole lot of people! NF consistently charts well on the Christian, Gospel, Rap and mainstream lists. The Search isn't even his first No. 1 album. His 2017 record Perception topped both Billboard Top 200 and the Top R&B/Hip-Hop albums chart upon release. His 2015 and 2016 albums Mansion and Therapy Session both topped the the Christian Albums chart, and made mainstream appearances on the rap albums charts and Billboard Top 200.

Obviously, Feuerstein worships the godfather of white rap, fellow son of Michigan and his doppelgänger: Eminem. To some extent, like his idol, he makes aggressive, intensely personal songs about his traumatic upbringing, which included being abused by his mother's boyfriend and his mother's overdose. He shares Eminem's spitty, machine gun flow, but his music listens like a radio-friendly version of the embattled rapper. His lyrics are moody and literal; cinematic string and piano chord interludes abound; and often his rhymes are heard over mild soft pop-rap production — though not always. Some of his ballads could be mistaken for late 2000's pop-rappers like B.O.B., while the harder stuff could definitely be mistaken for a Slim Shady deep cut (technically, he's probably a more skilled rapper than his contemporaries, G-Eazy or Machine Gun Kelly).

But he's more angsty than angry, and his discontent is PG-13. His songs are wrought sagas about heartbreak, betrayal, self-doubt, industry struggles, the ills of our culture and the obstacles he's faced in his life, that match up with the soft nihilism of his tough-boy emo aesthetic. He's pretty much only photographed in dark t-shirts, jeans and hoodies (a la a certain era of Eminem, but with Hot Topic pre-ripped skinny jeans). His new album cover shows him pushing a grocery cart in a field, solemnly holding a bouquet of black balloons like a 2009 Tumblr post plus Timberlands. He often performs with a Joker homage extended smile, drawn on his face with black marker, apparently, to represent the superficial positivity or "fake smile" society demands of hurting people, like himself.

It is probably wrong to call him a "Christian rapper." His lyrics rarely include boilerplate Christian pop language about worship and devotion, like that of say, Daughtry or Creed. However, even as he's started rapping less about religion over his career, there are still parameters of Christian respectability and an ethic of atonement and uplift to his music. Even while he's rapping about suicidal feelings or how messed up his life and the world are, NF never curses or talks about violence. He doesn't rap about sex, and takes pride in how he "respects" or at least doesn't brag about conquests with women. The cleanliness makes it feel like, even in his rage and melancholy, at any moment, he could drop a bar about his king getting him through the dark days.

How does the Christian world see him?

He's a full-on Christian darling, who a lot of parents think is helping make God cool agin. CCM Magazine (Contemporary Christian Music) called him "an artist to watch," while Christian site Cross Rhythms called his debut album Mansion "unquestionably one of the finest ever to emerge from the gospel hip-hop scene."

"Behind the anger and pain, Christian rapper NF is doing a good work of reaching millennials lost in their brokenness showing them an alternative to suicide," reads a review from Christian news site GodReports.com.

How does the rap world see him?

NF, at least, definitely feels like a triumphant underdog, rather than an asterisk to the scene. On his 2017 track "Outcast," he raps: "Yeah, I guess I don't fit the mold of rap/ 'Cause I'm respectin' women/ I heard your record, I was laughin at it/ Maybe they would like me more if I got a little graphic with it/ Nah, I don't wanna blend in with you little rappin' idiots, I'd rather be the outcast."

In turn, the rap world doesn't take him fully seriously, even as he tops their charts. Eminem, who shockingly doesn't like NF being called "the new Eminem" (oops, sorry Slim) is suspected to have dissed his God-fearing devotee on Kamikaze track "The Ringer," (in which he also takes shots at Lil Yachty, Lil Pump and other "mumble rappers") when he spits the following, key phrase: "an NF-ing Recovery clone of me."

"It'll help me get back to myself and she'll love me/ I mailed the bitch back and said if I did that/ I'd just be like everyone else in the fucking industry/ Especially an NFing Recovery clone of me."

Okay, got it. So how did he out-sell Chance?

It's definitely confusing. NF has almost no mainstream press (his top interviews are with NME and Idolator), promotions or collabs (Sasha Sloan is featured on the album). He does have tons of Christian press, features on songs by Christian rappers Flame and TobyMac plus one with (ostensibly non-Christian) rapper Futuristic; as well as songs featured in sports video games like Madden NFl 16, MLB The Show 18 and on ESPN, VH1, Showtime and Chicago P.D.

But none of that explains how he out-sold one of probably the top five most famous contemporary rappers, who's long been a mainstream darling, with crossover appeal to non-typical hip-hop listeners.

Here's what happened. In total, NF's The Search moved 130,000 album equivalent sales (even though it was only projected to sell 95,000 units), in comparison to Chance's 108,000. However, the Billboard lists are calculated based on multimetric consumption, meaning they take into account traditional album sales, track equivalent albums (10 tracks sold sold add up to one album unit), and streaming equivalent units.

The Big Day actually crushed the The Search in streaming, with 80,000 equivalent album sales via streams in the first week, versus NF's 58,000 streaming units. This makes sense: Chance is a streaming artist. He self-released his first three mixtapes, 10 Day, Acid Rap and Coloring Book, as streaming-only releases. Coloring Book became the first ever streaming-exclusive album to chart, hitting No. 8 on the Top 200 with streams alone, according to Billboard.

Where NF specifically triumphed was with 84,000 traditional sales from the iTunes store and physical CDs (more than any other rap album this year) and way more than Chance's 27,000. His sales were considerably helped along by a concert-and-album, and concert-and-merch bundle deals (though Chance had both merch and concert bundle deals, as well). NF was slinging records to a market that Chance simply doesn't have — specifically the kind of person who buys CDs at Target.

In addition, although NF and Chance's musical styles are hardly worth comparing, the gap in their subject matter might actually be relevant to the chart battle. Given how hellishly depressing NF's album is, it's possibly just a more timely listen for fans in the context of our unrelentingly depressing and violent socio-political hellscape, than Chance's sometimes punishingly optimistic debut. It's not that Chance (or mainstream rap) listeners are pivoting to NF... but people who listen to NF liked NF's album, more than people who listen to Chance, liked Chance's album. Does that make sense? A little bit like the 2016 election... eek! Vote in 2020, y'all.

Also, it's important to keep in mind that the charts are mostly nonsense, and only becoming more-so as merch bundles skew sales (they defined Tyler the Creator's win over DJ Khaled, and according to the New York Times, half of 2018's 39 No. 1 albums were a part of merch bundles), and Tik Tok and Twitter become influential but unquantifiable music platforms in their own right. I think it's safe to say that the apocalypse, aka a Christian rap takeover, is not yet nigh. But hey, give The Search a listen and decide for yourself.