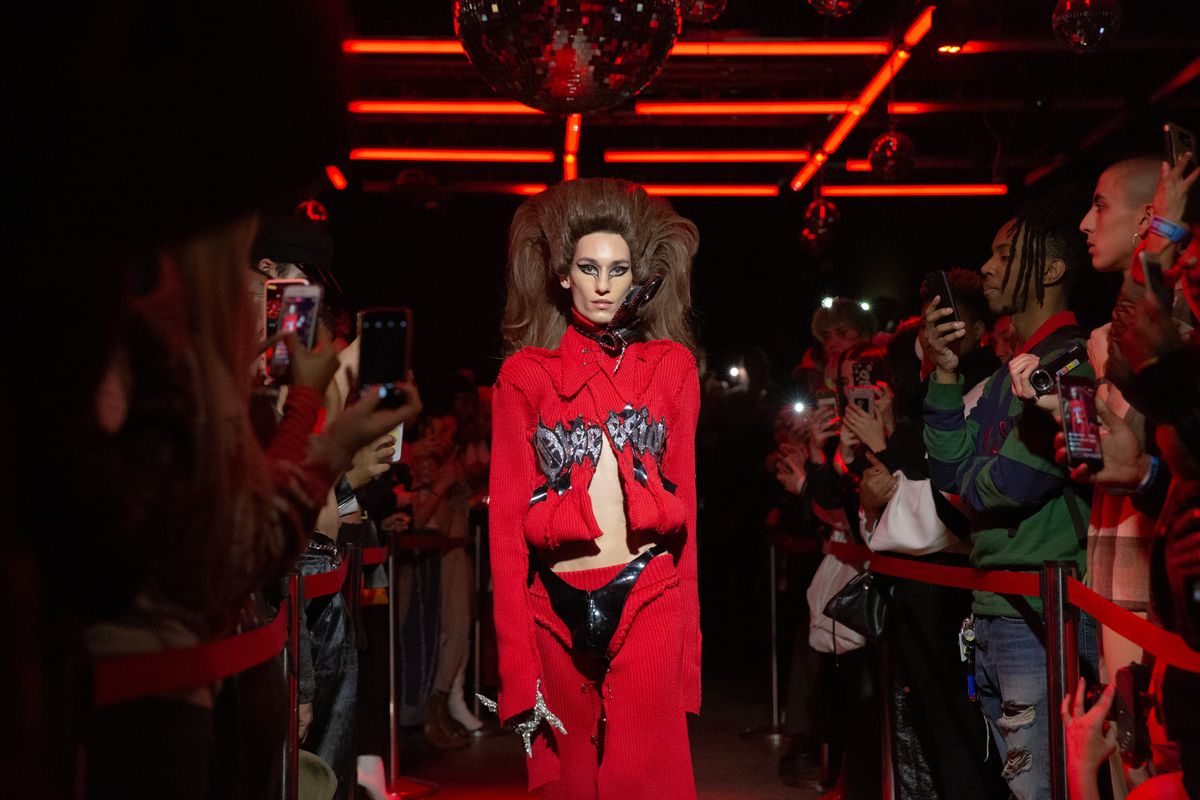 Few designers are worth trekking to the deepest corners of Brooklyn for, and Wesley Berryman (Weslah) is among them.

The rising fashion star made his official NYFW debut a few years back with a presentation at The Monster Cycle in SoHo, but this season marked Berryman's debut runway show — and he's been hyping it up for weeks on Instagram like a pop musician teases their first album. Completely independent and hands-on, Berryman has successfully built an organic audience online, and his fall 2019 collection brought out that cult-like crowd of LGBTQ club kids eager to see the clothes IRL.

Having designed for everyone from Lady Gaga to Beyoncé, I invited Allie X to see Berryman's breakout production. With her chrome architectural dress, no eyebrows, and '80s glam-rock makeup, the Super Sunset singer fit right into Berryman's counterculture world, where technicolor wigs, bone-mincing platforms and Instagram queers all intermingle (Nikita Dragun was notably in attendance, tucked away in a VIP section and wearing custom Berryman from the new collection).

Berryman took over Analog in Gowanus, Brooklyn — a shift from traditional NYFW venues, but one that helped move along the designer's vision. "We chose Analog because it evoked the violent, electric underground from which Weslah was spawned," he told PAPER. "The raw chaos of the show and venue was something that mirrored my almost guerrilla approach to the design and execution of the garments."

They sectioned off a catwalk in the middle of the space using red rope, like a trashy club entrance — the ones your favorite celebs have ushered past for decades, dodging paparazzi. It was staged to represent "the journey of life and death," according to Berryman, whose models' walks shifted with the tone of the soundtrack (created in collaboration with Jazzelle Zanaughtti AKA Uglyworldwide). The clubby moments saw them plowing ahead with haste; the thrashing, guitar-led transitions brought about fury; and the dramatic lulls saw slow, slinky struts. Interlude videos projected an ominous blood bath, and there were long, intentional pauses between certain looks.

"It's about the courage and pain it takes to walk outside everyday and just be yourself," Berryman said. "Because for the queer community it is not easy to even go about our daily lives without some sort of harassment. I wanted to show the bravery, the pain, and finally, the celebration of just unabashedly existing in the face of discrimination."

Dark, tattooed denim sets were bedazzled with the word, "Obsession," and crushed velvet looks were decorated with wildly haphazard thread. The collection introduced a lineup of monstrous Frankenstein shoulders, and dresses with shredded hems. Some models wore Berryman's take on the mini bag trend around their neck, while others had chastity belts locked onto their waists. The hair (by Evanie Frausto) was huge and horrifying, and the casting (by Ricky Michiels) lined up tomorrow's next big models, including the Dupont Twins and Brooks Ginnan. "I look for a model who knows who they are," Berryman said.

Once the show wrapped, and Berryman took a finale walk (wearing a cowboy hat, tinted sunglasses and midriff-baring top revealing his own "Obsession" tattoo), Analog quickly transformed from a self-declared "Electric Fashion Opera" to a full-blown party. Industrial remixes of pop songs blared, while CGI videos of Berryman's collection streamed against the walls. The designer's followers were duck-walking and death dropping, boys were kissing each other, and models eventually reemerged wig-less, ready to get wasted with the crowd.

"My biggest goal was to create a show that could change the world and the hearts of those who witnessed it," Berryman said. "I wanted tears. I wanted overwhelming happiness. I wanted hearts to stop and if only for a moment, I wanted the audience to feel transported into a fantasy where they can take on any challenge that stands in their way."