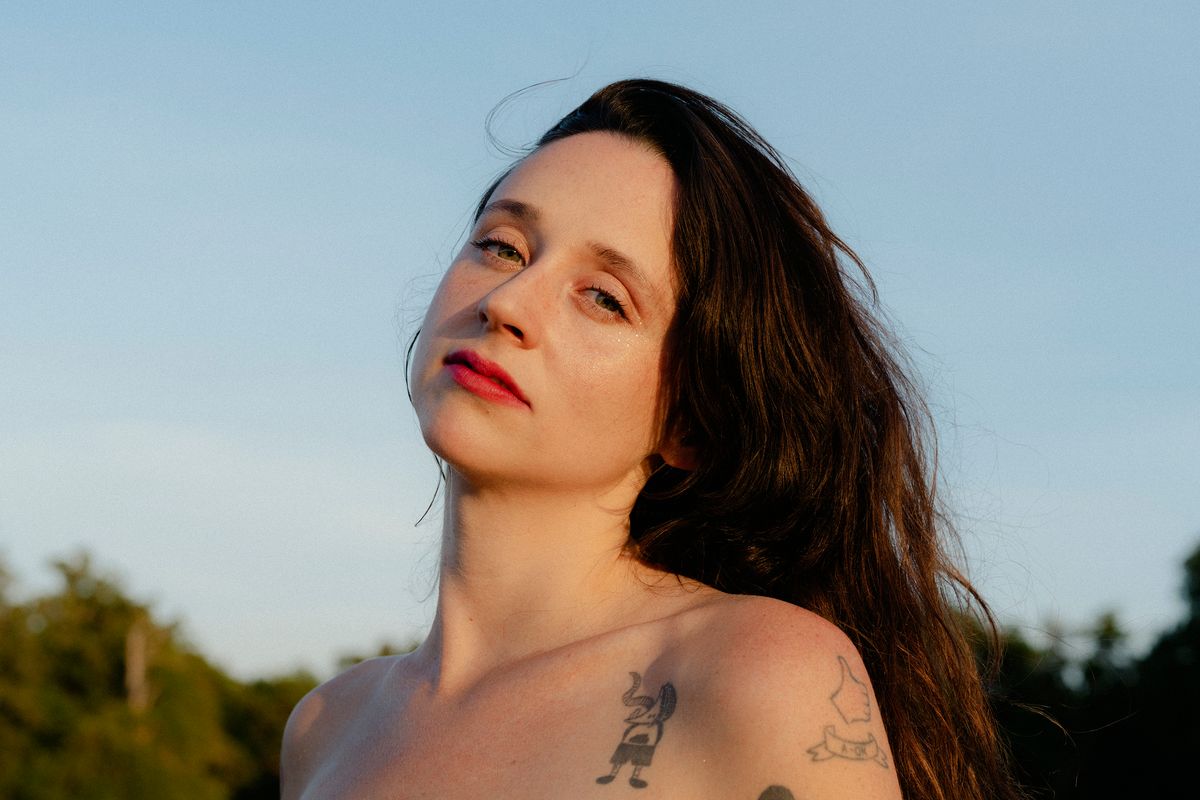 Waxahatchee Grows out Her Bangs

When Waxahatchee's Katie Crutchfield started touring in her early teens, she learned to hide her southern accent pretty quickly. "My sister and I would come to New York and feel like country bumpkins," she recalls some 15 years later at a diner in Greenpoint, Brooklyn. A documentary about young Alabama punk musicians filmed in 2006 preserves video evidence of their former drawls: "You can barely understand what we're saying. After that, we must have repressed it."

On her latest release, Crutchfield's singing in a more authentic lilt, a few steps less removed from her Birmingham upbringing. Saint Cloud is a country-leaning album that's notable for its clarity and confidence. The stadium guitars from 2017's Out in the Storm have been dispensed with. "I grew up with country music, and I just fully feel that now I'm ready to step into it again," she explains. Lucinda Williams, no stranger to declarative statements, was a key influence. "There's a lot of like proper nouns and things like that with her, and I feel like when I was writing this record, I really wanted to try and do that more."

Related | Livestream This: An Evening With Waxahatchee and Kevin Morby

Saint Cloud is a worthy early contender for album of the year. Simple song arrangements evoke end-of-summer warmth; lyrics are written from a place of peace and perspective. There's a whole lot of girlhood in indie rock, especially the whispery bedroom-recorded subgenre that Waxahatchee grew out of, but this a woman's record, one that might not be of much use to anyone under the age of 25. Though the two artists stand apart in genre, it feels in communion with Caroline Polachek's Pang. Both albums contain meta themes of self-reflection. ("Big fan," says Crutchfield of therapy. "I feel like understanding yourself is like the most exciting thing. I mean, you're never going to have that when you're 21.")

At 31, she feels like she's lived "100 lives." Her current incarnation is two years sober, relatively settled in Kansas City with her partner, the musician Kevin Morby, and less interested in melodrama than she's ever been. "The first record I wrote was just in the craziest time of my entire life," she says with a laugh. "You know what I mean? Like not only were the situations dramatic, but the feelings were so dramatic too."

Waxahatchee was conceived as a pointedly autobiographical musical project, and she's still committed to the confessional, even if that word is sometimes triggering. "Because it has a tone to it, it's almost like, 'I'm confessing something bad.' That doesn't really feel like it is accurate, you know?"

Not all art is borne from trauma or heartbreak, though there's some of that on Saint Cloud. Still, even when she's hurting, she's hopeful. On the wistful "Ruby Falls," Crutchfield sings about falling "without pain," bidding farewell to a past relationship on level terms. "The Eye" is a non-obnoxious song about being famous and in love — tricky to pull off.

Whereas in her teens she might have caught herself living out certain experiences on purpose in order to write about them, she's telling the truth differently now. "That's how this project is going to be sustainable: to just embrace every new phase of life and try to find a way to frame it," she explains. Crutchfield's lyrics have always been relatively straightforward, but on Saint Cloud they're authoritative. "I want it all," she repeats unapologetically on opener "Oxbow." The words sound like a relief to sing out loud.

It feels symbolic, especially when sitting across from her, that Crutchfield's recently grown out her trademark kitchen-scissor bangs. It was a conscious move: "I was ready to say goodbye." People no longer recognize her in public without them, which she finds amusing. Getting a little older and wiser might once have posed an occupational threat, especially to someone whose youth was once press release-worthy, but she's no longer worried about any of that. "I think it's cool," she says. "Our culture has been so obsessed with youth for so long. I feel like we are only just getting to a point now, where people are not only open to that, but really excited by it. There is always going to be like 8 million new young people that are coming out. Like, that's always going to be a thing."

This change in perspective hasn't just been an interior journey. Crutchfield has also watched the scenery shift around her. "Small DIY music scenes, I'm sure that they do still exist, that I'm just out of touch — but I also feel that in America, it shifted," she says carefully. "Kids are careerists now. And that's fine, I totally understand that, but I also feel, when I broke through, I wasn't really gunning for that. It kind of all happened naturally."

On Saint Cloud, life experience accrues interest the same way money does — only after you've left it alone for an extended period. Now come the rewards. "I feel very comfortable with what I've left behind, and then, what I've held onto," says Crutchfield. "It feels like it definitely shaped me for the better."