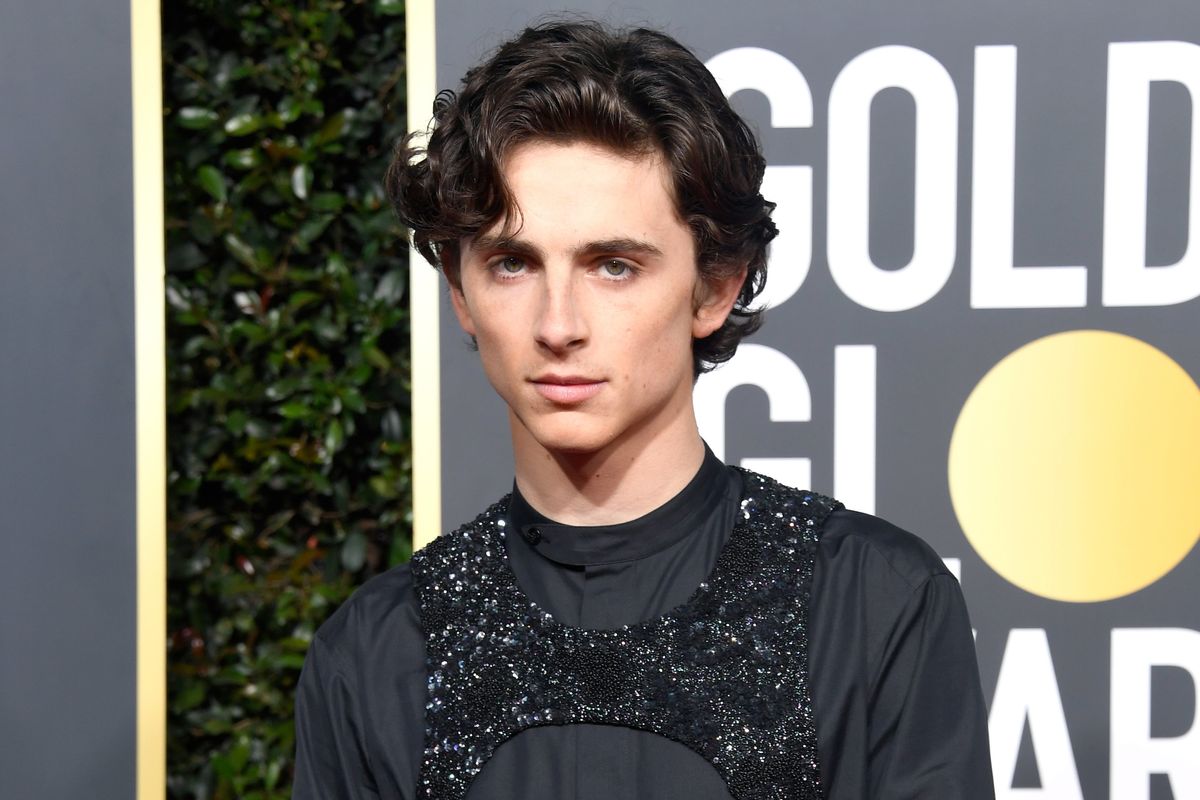 What could be buzzier than the hottest young heartthrob wearing the hottest young designer, sticking it to the the utter snooze-fest of heterosexual men's red carpet fashion with an inexplicable sparkly accessory and not a scrap of velvet or a bow-tie in sight?

Possibly if he also charmingly brought his mother as his date. And possibly if said mother proved herself the absolute coolest mom in the game and showed up in an Off-White pantsuit.

So that happened. Chalamet walked last night's Golden Globes carpet in a seductive and structurally unidentifiable Virgil Abloh piece, with his mother Nicole Flender on his arm. Flender looked like the hippest CFO in the conference room in a sleeveless black and blue Off-White pantsuit emblazoned with the "Off" logo. She also accompanied him on the Call Me By Your Name red carpet. We stan a boy who loves his "momma!" And buys her all the trendiest streetwear.

Next to his mother's boss vibes, Chalamet looked like a fetching young priest or a dashing glam pilot in impeccable tailored black trousers, shiny Chelsea boots, a clerical-collared shirt, Cartier bangles (a jewelry yes from us) and of course, that sparkly, strappy mystery.

The most frequent theory on Abloh's bedazzled creation is that it's a "harness." But I'm fairly certain, from the Twitter cries of "strap me in, Timothée!" that we've just settled on that term because of its expedience for sex jokes (don't worry he's 23. You're thinking of Finn Wolfhard).

Abloh has grandly dubbed it a "custom-made hand-embroidered mid-layer garment" but I'll just say that when I read that phrase... I picture some kind of crocheted WWE belt, not that thing hanging on Chalamet's birdlike bod.

Other whispers include a smock, a gun holster, a bungee jumping device, a dog leash and a baby carrier. Meanwhile Twitter has pointed out that Chalamet looked fit for a Olympic routine, or a guest appearance at Cirque de Soleil. The only thing everyone agreed upon was that he looked... delicious. So nice when all of us here on the Internet are able to come together and break bread together over a young beautiful person.

Call me a basic bitch all you want but timothée Chalamet is looking really good on the red carpet #GoldenGlobes https://t.co/sOUOP6YyjD
— nam (@nam)1546821461.0