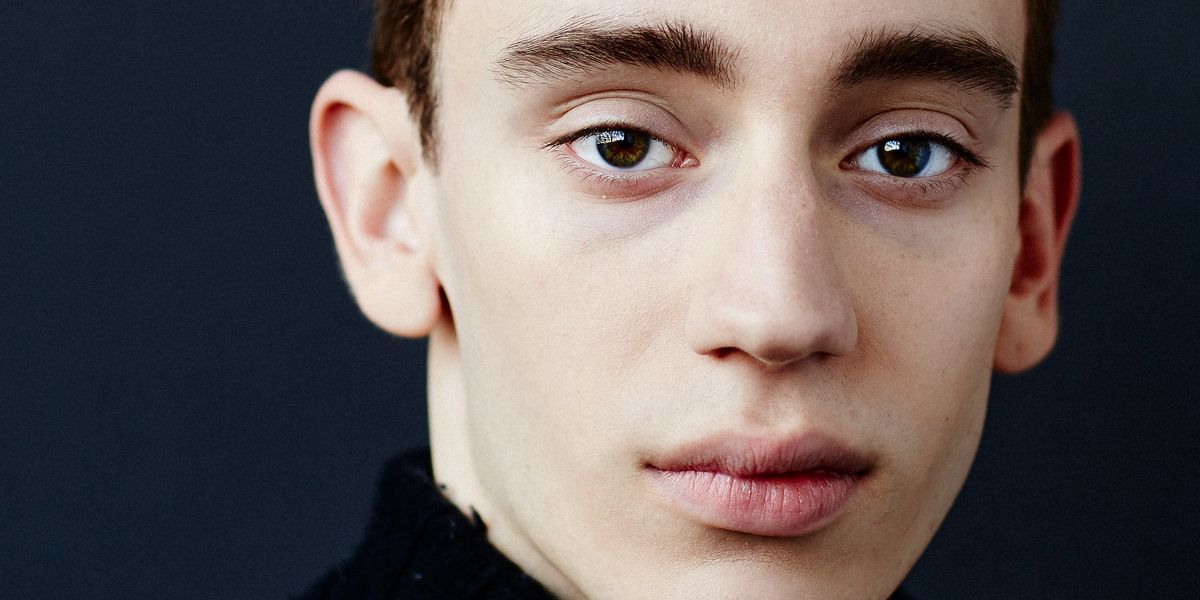 Théodore Pellerin is just waking up. It's an early, snowy morning in Montreal when the 21-year-old Québécois actor picks up the phone for our chat. For five years, the young actor has woven together an impressive tapestry of roles, culminating in an electrifying, uncomfortable turn as Vincent in the Montreal crime drama, Family First.

Under the directorial lens of Sophie Dupuis, Pellerin's character — a lanky limbed teenager with a penchant for headbutting strangers at parties and bouncing off the walls — is the film's scene-stealing revelation. A temperamental hurricane of a case study in what happens when coiled, chaotic energy is released in bursts of violence and love, it's no wonder that the role landed Pellerin a nomination for Actor in a leading role at this year's Canadian Film Awards and an award for Revelation of the Year at the Prix Iris.

"It felt like a gift. Although he's violent and sadistic, he has such a joy and a desire to make people laugh. To lighten the mood of his family," he explained of the unnerving character. For Pellerin, violence is an almost universal character trait in his career thus far. From an involuntarily celibate college student planning a massacre after being rejected by women in Incel to a brooding teen caught between raising his physically violent little brother and falling for a girl given telekinetic powers by aliens in At First Light, Pellerin's become a master class in brooding characters facing physical, emotional, and structural violence.

That isn't to say Pellerin is on a mission to become Hollywood and Quebec's go-to baby faced brooder. It's just that these characters appeal to him and, at 21-years-old, they were the parts that came towards him and that he fought to play. "There is some violence in almost every part I've played, but the complexity of the character is interesting," he explains. "A character who's in the middle of a crisis is a very rich character to explore."

"A character who's in the middle of a crisis is a very rich character to explore."

It may be his role in last year's conversion therapy film, Boy Erased, that serves as the most illuminating point of reference for his off-screen upbringing. In his brief role of helping Lucas Hedges discover being gay is A-OK in the film, Pellerin plays the soothing, sensitive painter Xavier. In a movie stuffed full of violence and crises, he plays the one person who seems to be completely at ease with themselves.

Born to a painter father and choreographer mother, Pellerin grew up in a creative home and experiencing life on tour. It was there, as he watched dancers stretching backstage and sat in theaters soaking in their performances, that he felt the first spark to pursue performing. "Sitting in the theater, not really understanding what was happening on the stage, I was just enjoying the whole feeling of it. The atmosphere of the theater and of the silence of the crowd. The sense of rehearsal. All of it."

You'd imagine that with this proximity to dance, Pellerin would've wanted to be a dancer as child, but his heart was set on another career track that might help explain his penchant for playing characters with an affinity for fighting. "I wanted to be a ninja," he recalls. "I did Taekwondo and kung fu and ninjutsu. I was really big on samurai swords." Luckily for audiences, this obsession with becoming a kung fu fighter didn't last, and as he entered his teens the acting bug bit as he discovered the magic of movies. Specifically, the work of Daniel Day-Lewis in There Will Be Blood ("a revelation"), Meryl Streep in Sophie's Choice, and Juliette Binoche in Three Colours: Blue were early influences.

"These are the ones that really hit me — it was the first time I really saw people live on screen. That's what I was attracted to. It was this incredible ability to become someone else and live onscreen." It was an attraction that ignited a yearning to "understand what they understood" for Pellerin. "That's the quest. Great performances still make me so excited and happy. I can't believe it when I see a great performance."

It's at this point in our conversation that I have to remind the actor that now it's his performances that are being critically lauded (an assertion he quickly brushes off). For Pellerin, the idea that he's becoming one of Canada's most promising young actors is met with shy embarrassment. There is no mistaking the cinematic spark he brings to every role. We're still days away from finding out if he'll win the Best Actor award at the Canadian Film Awards on March 31, but it's hard to imagine a win or loss mattering in the grand scheme of his career.

Like his desire to have the superpower of flight in order to "go in outer space and have a look on the world from very far [away]," it's best to view his trajectory from a macro lens. It was only three years ago that he learned to speak English for a role in Kathleen Hepburn's Never Steady, Never Still and now, he's set for what could become a one-two punch of breakout roles. Later this year, he'll star opposite Kirsten Dunst on the 90s-set YouTube dark comedy series On Becoming a God in Central Florida before joining Love Simon stars Nick Robinson and Keiynan Lonsdale in a film adaptation of the cult 1980s novel Weetzie Bat.

With these high-profile projects in the pipeline and a steady stream of critically-acclaimed roles under Théodore Pellerin's belt, it may be time for us, rather than him, to wake up.