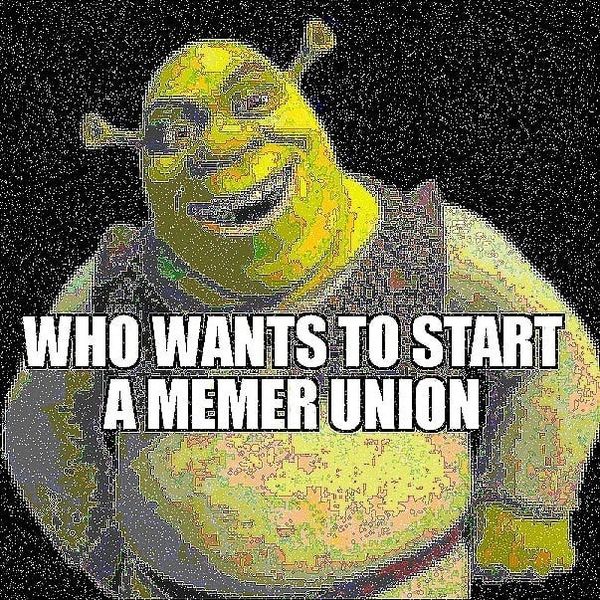 What's Going On Behind the Meme Union's Content Creation Advocacy

Across industries around the world, people are unionizing at an incredible rate. From digital journalists to sex workers to fast-food restaurant employees, new unions fighting for better, more equitable working conditions are popping up everywhere — so it only makes sense that content creators are doing the same.

Operating under the @unionizedmemes handle, IG Meme Union Local 69-420 (what else) is a nascent organization dedicated to representing the collective interests of original content creators across the globe.

At the time of writing, there's close to 100 approved members, and more than a few of these names are instantly recognizable to anyone who regularly peruses the Explore page. With a wide range of creators including everyone from heavy-hitters like @teenagestepdad and @th0t_catalog to more niche accounts like @wipeyadocsoff and @stalins_socialist_meme_granary, the Meme Union is comprised of some of the funniest, most prolific content creators operating online today. Unfortunately, as many of these people have found out, it's hard out here for a memelord — especially when the enigmatic IG algorithm's involved.

As Webmaster and Organizing Committee member Renee Worley, aka @vaporcult, tells PAPER, there's a big discussion to be had about keeping Instagram accountable for some of the shady-seeming changes that have affected what pops up on a user's homepage and harmed honest, hard-working meme-makers.

Worley — who was also involved in 2016's Meme Alliance-helmed Zuxit movement, which took Facebook to task for their shoddy support process for deleted pages — says she decided to join the group thanks to a lack of transparency surrounding things like the limiting of individual audiences, the allowance of large accounts that continue to monetize stolen content, and the removal of content in violation of Instagram's Community Guidelines.

"If the platform is making money off our content, and we're not seeing any benefit, I think that's problematic."

"We're independent contractors, but we're relying on a platform," Worley says, before arguing that platforms are gaining ad revenue from the work of creators, mainly thanks to way many companies are monetizing on meme and internet culture.

"If the platform is making money off our content, and we're not seeing any benefit, I think that's problematic," she adds. And though the union is still brand new, their focus at the moment is to get organized and help existing members, whether it be signal-boosting requests for people to reach out to Instagram in order to help get someone's account back or simply providing meme-makers a defined community and accompanying online space.

"We all have very similar complaints and experiences where our pages are being deleted and we feel very powerless," Worley explains. "But, at the same time, our content is seen by millions and millions of people." After all, as she points out, many meme-makers have been responsible for large cultural shifts and trends — the most prominent example being @teenagestepdad's cult meme page, Pamplemousse LaCroix Memes, which Worley says helped establish the sparkling water brand as a "cool," internet-approved drink.

"It has a real impact on real life, it doesn't just stay on the internet," she says. "So we wanted to bring everyone together in a way that's proactive and supportive, rather than just a group of people talking about one thing online."

That said, it doesn't appear that people understand the value these creators bring to these platforms. According to Worley, Instagram is simultaneously "swaddling" the reach of certain, popular posts, while allowing fringe accounts — which espouse harmful, far-right politics and overtly flout community guidelines — to remain active. Not only that, but Worley says that many of these fringe accounts "typically have higher engagement" than more visible, apolitical accounts that may peddle memes that occasionally flirt with things in potential violation of the community guidelines. To that end, it's unclear who exactly gets to be considered a creator with "valuable" content, especially when engagement numbers become skewed or a post is completely removed.

"We see pages that are racist and horrible, and those accounts are still allowed to make content. But then someone else who makes a pretty harmless meme that's slightly political, really not fringe, will be completely removed from the platform," Worley says. "There's no answer why. There's a lack of transparency in terms of the platform, and it feels like a certain kind of content is being pushed off the platform."

That said, this isn't just a movement isolated to Instagram. As Worley points out, across social media, you can see various creators looking for more power in a space where generating revenue for third parties has become "a new form of labor."

So what's the union's proposed solution for all of this? Worley says that while a lot of members would like to see a designated meme liaison at Instagram, she personally just wants the platform to "take memes as a serious form of content," especially as it does generate ad revenue and is "something brands are trying to do with their advertising strategies." And while she does admit that it's a little complicated to say whether or not the union will ever be recognized by the National Labor Relations Board, the way content creators are currently being treated is something that needs to change.

Many people seem to agree with this point. Saying that they've experienced a huge uptick in applications in the past few days (not to mention an orchestrated raid from 4Chan users), Worley encourages people who are interested to be patient as the group sets up a more effective infrastructure for fielding members. After all, it's deeply important to them that every potential member is screened to ensure the union remains secure, especially given the prevalence of doxx-happy, alt-right Nazis on Instagram. So what are you supposed to do as you wait for your application to process?

"Follow the [union] page. Like posts, comment on posts, tag people in posts, whatever you would normally do to help a page or piece of content perform well," Worley suggests before explaining that a "more engaged and higher follower count will help us break through the Instagram algorithm" and allow their message to reach all their followers.

"You don't have to make memes to support us," she adds. "If you believe people making content is labor, then that in and of itself is just supporting the page itself. It says, 'I appreciate what you guys are doing, and that has a huge impact."