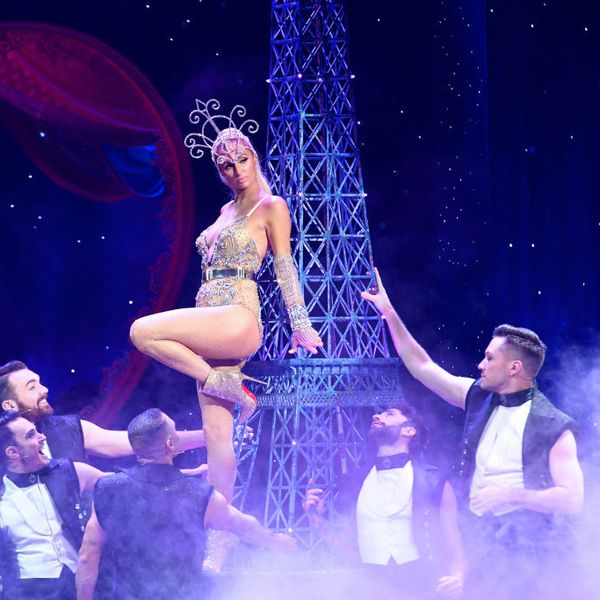 Paris Hilton Mounted the Eiffel Tower at The Blonds

The Blonds are pretty much synonymous with the word "spectacle" at this point in their illustrious fashion careers. Creative duo Phillipe and David Blond have never shied away from over-the-top glitz, glitter and glam (see: Fall 2019's production with Lil' Kim, Aquaria, and more), and last night's Spring 2020 NYFW presentation was no exception.

Partnering with and inspired by the hit Broadway musical, Moulin Rouge, famous devotees from Martha Stewart to Saweetie filled Time Square's Al Hirschfeld Theater last night to watch a show combining live Camp, performance art, and no shortage of sparkling crystals and sequins. Fashion darlings in attendance include Uglyworldwide, Shannon Clermont, and the DuPont Twins. The stage was outfitted with Moulin Rouge's classic accouterments, from its hall of hearts to its lit-up windmill and blue elephant head. The more the better.

In the crowd, Wendy Williams had an assistant in tow making sure her hair stayed brushed. Erika Jayne casually posed for photos and sipped wine before dropping her "Drip" video today. Onstage, the show opened with Moulin Rouge cast members singing "Lady Marmalade." Someone in the crowd whispered "where's Mya?" Pose's Billy Porter (who wore gold angel wings by The Blonds to the Camp Met Gala), dressed as king of the royal court and brought down the house singing about self-love while vogue performers wriggled across the stage. Models traipsed to and fro as the heavy of bass of Lizzo's "Tempo" filled the venue. They alternately wore bedazzled takes on swimwear and embroidered bodycon looks.

What else? A duet of Elton John's "Your Song," during which soloist Aaron Tveit wore a spiky, studded leather jacket that shone bright enough for the nosebleed section to see. Gigi Gorgeous appeared onstage during a "Diamonds Are a Girls Best Friend/Material Girl" mashup. Also, a can-can routine went down! Paris Hilton made an entrance, too, clinging to a spangled Eiffel Tower wheeled in by a crew of hunky men, of course.

And to put on a memorable show, Hilton helped do the most, as she descended the tower and, in a bodysuit and tiara, served a cheeky walk that included flirty heel kicks. Everyone, from cast performers and models, came out at the end and danced to Beyoncé's "Crazy In Love." If this all sounds like a lot, it is. More is certainly more, and nothing less, The Blonds remind their audience. In a fashion world that consistently privileges minimalism above all, The Blonds' maximalist approach is refreshingly welcome.