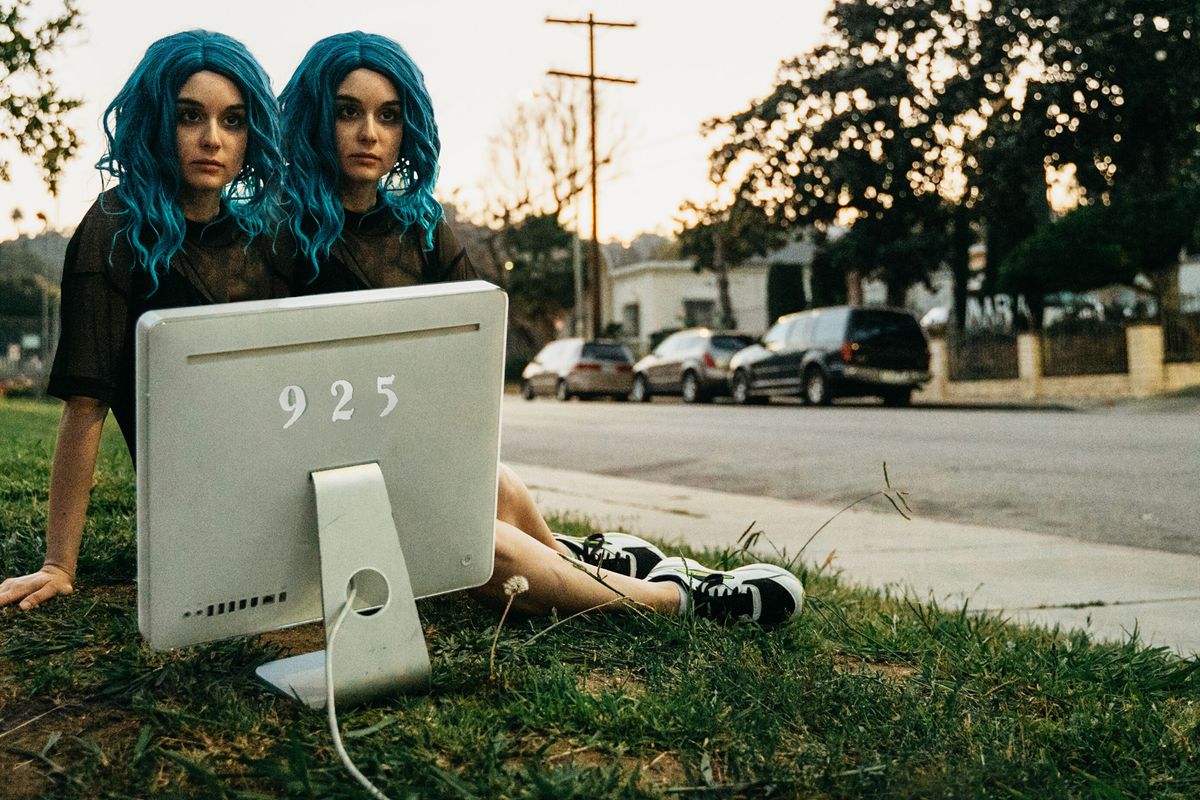 The song's built around a thick, sultry bassline and flirty drums that sounds like bubbles popping — production courtesy of AObeats. In a frothy, vocoder-laden croon, Lisa mixes dirty metaphors in the song's infectious booty call, including the crown jewel of a chorus: "Go to work, treat my body like a 9 to 5/ If you need to pray, go to church/ Altar's right between my skirt." That has to be the best labor-related sex metaphor in pop since Fifth Harmony's "Work From Home."

It might not be groundbreaking in pop to deify the female body (see: "God Is a Woman") but Terror Jr makes the trope sound infectiously fresh.

"9 2 5" is something of a comeback single for the duo, who recently departed from Atlantic after the release of their debut. It's also the first single off the band's upcoming EP Come Outside And Break Your Heart. PAPER caught up with Lisa and David to talk about going indie and the inspiration behind "9 2 5."

Lisa: "Darling Nikki" by Prince, "Spider-Man Dick" by CupcakKe and "Let Me Love You" by Mario.

Is the religious imagery personal for you guys?

Lisa: Yeah, it is personal for me. Religion is used as a tool of oppression against women. A man will pay to fuck a woman and then turn around and shame her for being a sex worker, saying she's only worthy of respect if she's virginal and pious. I read a lot about incels and they fit that description exactly. So I loved making a song about being selfish, about a man focusing on my satisfaction only, and then the religious undertones of him worshipping my body/treating it like a temple just make it a bigger "fuck you."

David: Hmmm it's personal and it's not... just depends if someone is using it to hurt someone or help someone. On the aesthetic side of things, religious imagery is so fantastical and awesome and scary.

Where would you place or characterize the track within Terror Jr's larger body of work?

Lisa: The bassline definitely makes it our "funkiest" song, but there are some glitchy pop elements that kept it true to us. It's dance-y and bubbly, and has a lot of layers you don't catch on the first listen. AObeats and Scott Chesak went hard on the production. As far as our larger body of work, we're at our best as a group when we don't overthink it, so I just focus on whether I'm proud enough of each project to attach my name to it and put it into the world

David: It fits snug right in the middle... But really, it does.

Tell us about your recent decision to go independent.

Lisa: Atlantic was cool, and they were good to us. But we've never needed anyone to hold our hands through this and I think it makes more sense for us to do it on our own. Creating with no limits is freeing. Learning to be your own label is stressful, but having ownership over our music for the first time is worth it. I don't want to break the fourth wall but, when PAPER reached out on Twitter [about premiering the song], it was a huge deal to us. It made me believe that we can actually succeed on our own. And to our fans: we're self-funded now so please continue to bless us with those streams, haha!

David: We released our album on Atlantic and it was OK. We absolutely love our album. I really cherish Unfortunately, Terror Jr, like a real human child. But it didn't move like we had hoped and we were like, "Let's just go back to how we actually felt like we worked and what felt natural and comfortable," and that's doing it on our own, real minimal. So yeah, we are doing it on our own label that we are calling "Grape Music." #AppleShook

What's up next for you guys? Is this a standalone single, or off an upcoming project?

David: This is not only our first "original collaboration" (shout out AObeats), but also the first song off of what's "technically" our first EP, which is called Come Outside And Break Your Heart. It's four songs and yeah, as a creators who is very hard on himself, I find myself as satisfied as ever. It feels like we keep growing and that's what matters to me.