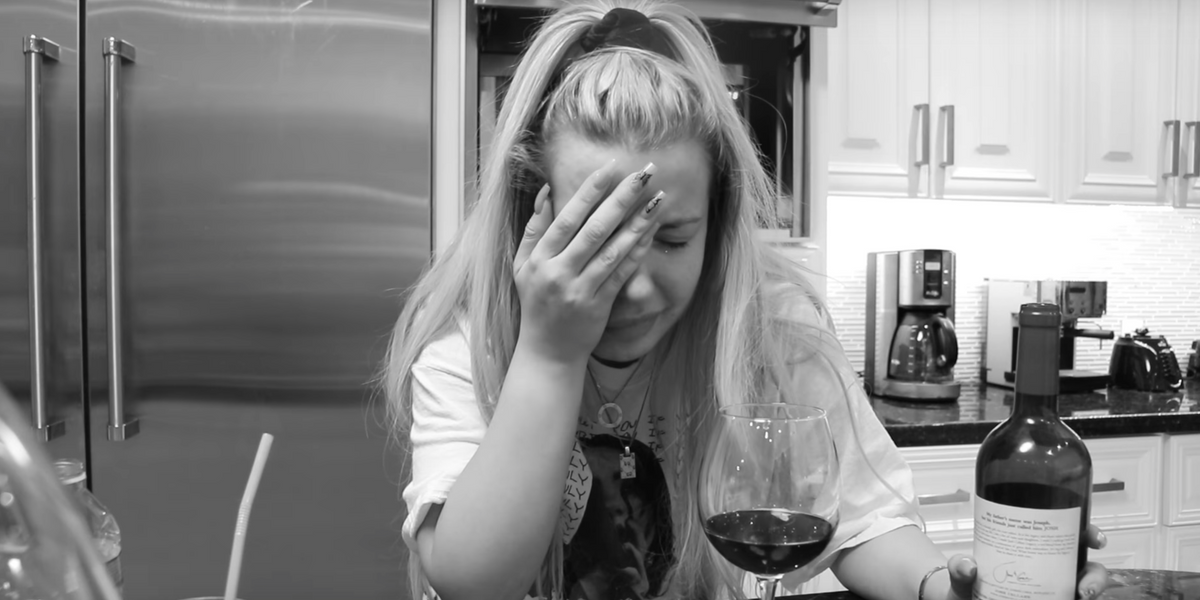 All it took was Billie Eilish unfollowing her for Tana Mongeau to break out a hefty bottle of wine, binge eat on her kitchen floor, and sulk in her finest fan merch to mourn the loss of her favorite follower. Cue the black andwhite filter, "When the Party's Over" background music, and vampy tears.

News broke of The Unfollowing on social media quickly after it occurred, since Eilish is notorious for keeping her following at a holy 666 — as one does. While Mongeau states in her video that she understands the sacrifice for the 'gram, what follows is a dramatic, extended cut scene of her wandering around her house. In various states of upset and despair, she drinks and pretend-cries to the instrumental for Eilish's "When the Party's Over," which she plays herself on a keyboard.

Near the end of the video, Mongeau sinks into a bathtub in a head-to-toe Chanel logo tracksuit, wine in hand, before drying off and grabbing a bag of Cheetos to pair with a glass of her finest red. What a refined depression-snack palette!

The video appears to be all fun and games, with Mongeau laughing at different points about getting unfollowed. One can't help but wonder, with all the merchandise she owns and songs she loves by Eilish, if she might be a little bit saltier than she's letting on. Regardless, both stars are #winning right now in their own respects; Eilish hit No. 1 on the Billboard Hot 100 a few weeks ago with her single, "Bad Guy," and Mongeau was just recently married to mega vlogging sensation, Jake Paul, paparazzi and headlines in tow, of course.

Watch Mongeau's full breakdown of The Unfollowing, below.