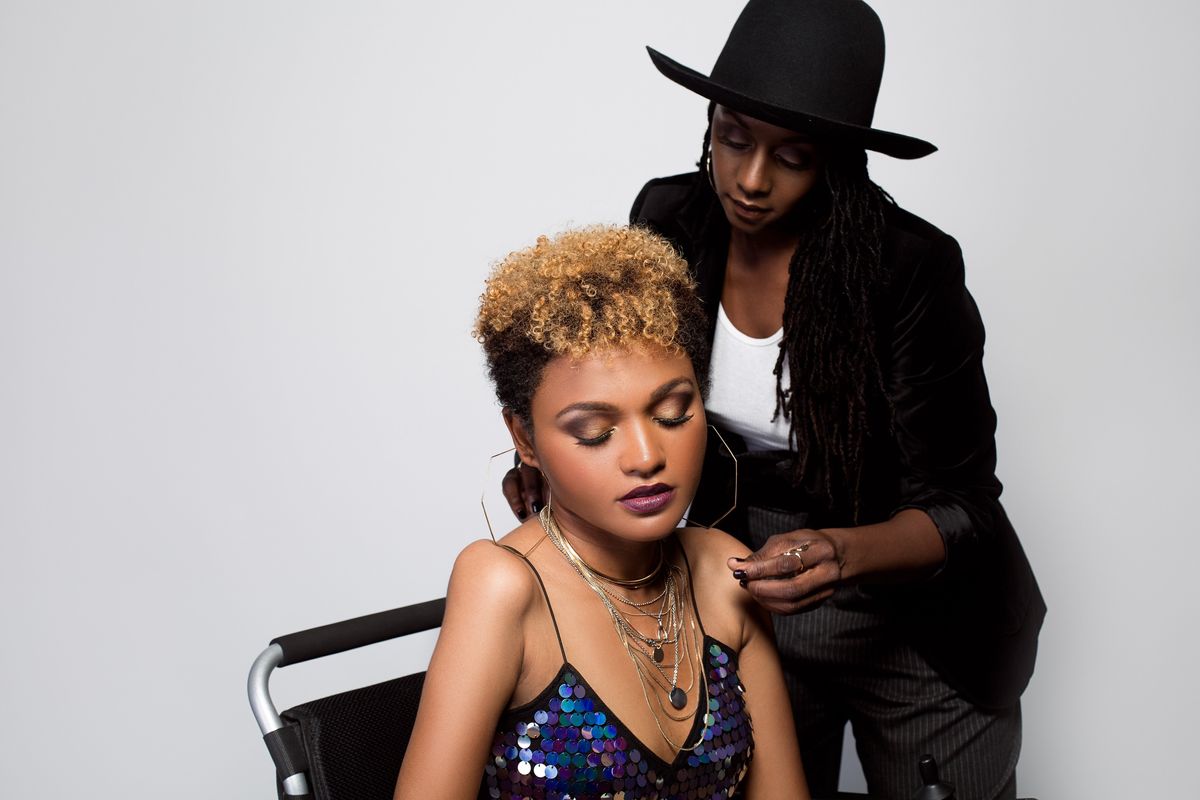 When Stephanie Thomas first started Cur8able in 2010, the goal was to become superfluous. "I'm going to create a business that will put myself out of business, meaning that I will do this work so well that people will no longer need a disability fashion stylist. They will be so inclusive that there will be no need for what I do," she explains.

The blog, which has since grown into a disability fashion lifestyle platform, started out as an effort to organize and create content, so media and brands could put out more inclusive photoshoots, with the ultimate goal to destroy negative perceptions of people with disabilities. It's grown into something much bigger, and Thomas has been recognized as a talented stylist and fashion consultant who is shaping new industry norms.

When it comes to casting disabled talent, she insists, "styling isn't the issue." Her work is an alchemy of two pillars: empowerment and education. Dignity and independence are key, but so is enjoyment. "The first issue is attitudinal barriers of who a person with a disability is: what we look like, what our capabilities are," she explains. "Getting beyond that will open up the minds of a lot of people."

Thomas recalls one particularly powerful moment in her styling career when she was working with a client in a wheelchair whose feet hung straight down, meaning they were only able to wear certain kinds of shoes. "I just thought 'y'know, we're going to do the hard work,'" she says. "I'm going to grab a box of tissues, we are going to set aside a Saturday and we're gonna cry our way through this. And to see her face light up when we just increased the size of her shoe. It opened her up to so many styles. She was able to slide her feet into shoes she didn't think she could wear. She said to me that she'd never even stopped to look at this shoe because, 'I automatically knew that I would never be able to wear this.' And then she cried and then I cried. That's amazing for me that a specific shoe can change someone's life."

Thomas began this life-changing work professionally nearly three decades ago, but her reverence for style extends back long before that. "It's always been my mother," Thomas says. "For me, the '70s, Black women, that style, that point after 'I'm Black and I'm proud' hit where there was this identity with afros and dresses and skirts. I remember my mother would dress me in all of these really cool dresses and I would obsessed over clothes. And then my mother taught me how to sew. We weren't rich or anything so I would do what they call up-cycling now. If I saw something in Vogue and I really loved it, I would recreate it. I would rip a pair of pants apart and create a skirt before I went to school in the morning."

Related | Why Do Weed Products Look so Luxe Now?

After graduating high school in 1987, Thomas spent several years working as a cheerleader for the Chicago Luvaballs (she was Co-Captain her second year) before pursuing further education at Kentucky State University, where she won Miss Pride of Kentucky State and was Top 10 in the Miss Kentucky Pageant (the preliminary pageant for Miss America).

After graduating in 1994, Thomas's calling was set into motion. "I was literally researching and talking with everyone I met, including calling and meeting with occupational therapists, people with disabilities and their dressers, family members, people I met on the street," she says. "Also, ordering all of the catalogs I could find, reading books written in the 1940-1979… anything I could find. In addition I followed trends in this space as the Americans with Disabilities Act was beginning to impact retail access and more. So I didn't know I was going to create a Disability Fashion Styling System. I was researching to solve a problem by any means necessary using my unique skills set."

Part of the unique skill set comes from lived experience. Thomas herself was born a congenital amputee, missing digits on her hands and feet, and acutely understands the ways in which people with disabilities can be othered. "I remember being on an elevator and I had my pedicure out," she says. "I always pedicure if I'm going to have my toes out. It was almost 110 in Virginia. I don't have all of my toes so — I have three toes on one foot and four on the other — and this woman literally looked down, she looked like she could be my grandmother, and she said 'you should be ashamed of yourself; that's disgusting.' I don't know this woman. So imagine being in the small elevator and then the other two people's heads immediately are dropping to see what she's looking at. And imagine being me standing in there. And this woman was a Black woman. She looked like she could be my grandmother. She looked kind and comforting but she was evil. And that reminded me of the remnant of the Ugly Laws. We're just getting barely beyond that point where disabilities were expected to be hidden."

"I don't want anyone to feel like how I did in that elevator that day — like I have something I need to hide or be ashamed of because I look different from someone else," she says.

Some of Thomas's clients: Lolo Spencer

Race has also long been a barrier for Thomas. "This is a conversation around systemic racism too," she says. "I hold Masters degrees. I am able to talk about this from the user side. I'm able to pull data and research. But I don't often get access to those rooms that [my white peers] get. I literally have letters from 2003 where I've been trying to get in those rooms and say 'this is important' and heard nothing back." That, she says, began to change earlier this year after decades knocking at the door, and residual wounds remain.

"What's really hurtful to me is that I have spent 28 years and yet sometimes people will treat me as though I know nothing. And they will look at me and go to someone with less education than me but because they feel more comfortable with them because of their ethnicity. And it's the subtle things. It's not someone calling me the 'n' word. It's the lack of respect. It's the thing that you feel when you know it's not your imagination."

Luckily, others have joined in the conversation in addressing the intersectionality of Blackness and disability — and dismantling the marginalization of both. At Sunday's Brooklyn Liberation: An Action for Black Trans Lives, author Kimberly Drew displayed a sign that read "Black Disabled Lives Matter." Hours earlier, model Aaron Philip posted her take on the #VogueChallenge along with a caption that read: "For a model like myself who is known in my industry and is objectively Black, trans and physically disabled seeing representation for my community that's not a sob story or patronizes us is CRUCIAL. I'M JUST A GIRL. I WANT LIL GIRLS LIKE ME TO SEE THEMSELVES IN VOGUE AND ON THE RUNWAY, AND YES ESPECIALLY IN WHEELCHAIRS!" One week earlier organizers with disabilities led a crowd of hundreds in a protest against police violence in Milwaukee.

These recent events aren't the only thing encouraging Thomas. I ask her to revisit a 2019 Guardian story she participated in, "Why 2019 was a landmark year for disabled fashion," to see if she thinks the same can be said of 2020. "I think what's interesting is that most people would be discouraged but after 28 years of following these trends I'm actually encouraged," she says. "I was doing all of this baking during quarantine and I kept putting things in this mixing bowl and I thought 'y'know that's what they need to do to disability interests.' There's so much disruption in the fashion industry that this is the time where it can actually be included at the beginning of the conversation as opposed to being sprinkled on top like the powdered sugar at the end."

Photos of Lolo by Lorene Janae
Photos of Chauntal, Kelsey for Zappos Adaptive
Photos of Tamara for Alegria Magazine