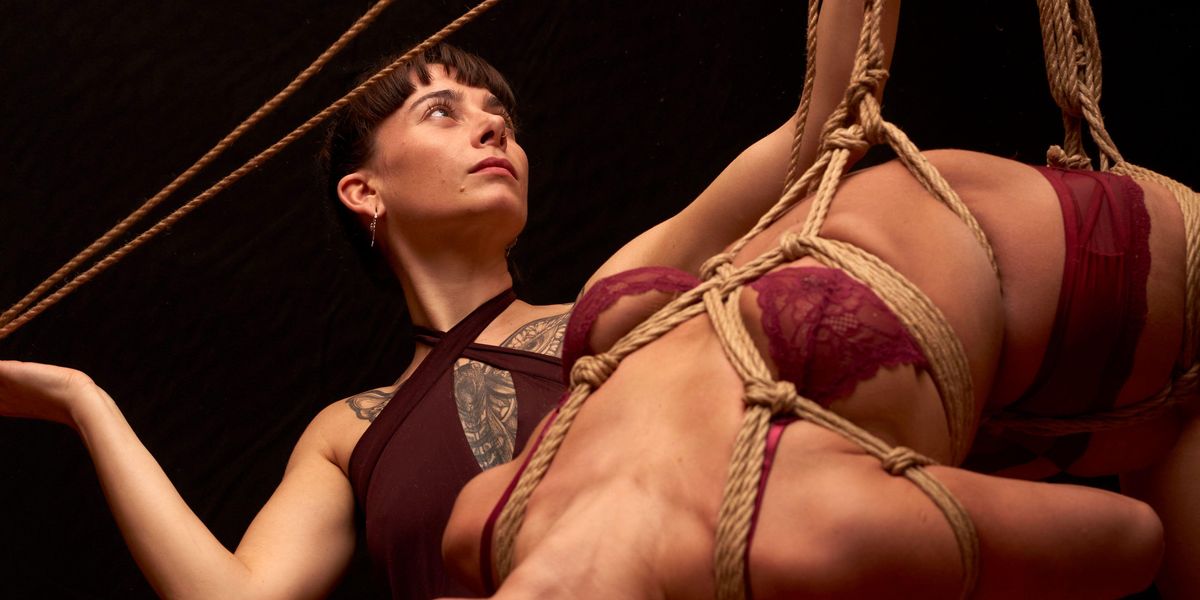 If the thought of being tied up is titillating to you at all, chances are you're likely familiar with the art of Japanese rope bondage. With deep roots in Japan's rich aesthetic and cultural history, Shibari originally emerged in the late Edo period via erotic imagery and sexual activity. The practice then became extremely popular in Japan during the '50s thanks to fetish magazines like Kitan Club, as well as when rope bondage began to be featured in live SM shows in the '60s. However, Shibari as we know it now in the West has since evolved into a very different discipline, and there are also a number of separate reasons why people practice it.

Not all of these reasons are necessarily sexual, as there are "casual" practitioners who focus on rope tying technique and patterns, more "artistic" people who enjoy the aesthetics and movement, and the "intimate" folks who use it to foster a sensual connection with their partners. And though there's plenty of overlap between all three categories, it still may take some time and practice to figure out what individual needs Shibari will fulfill for you. Since we're in the modern age though, one place making this easier is online rope educator Shibari Study.

Founded in 2019 by ex-partners Marika Leila Roux and Anton Martin, Shibari Study offers step-by-step courses for all skill levels on its subscription-based platform, which starts at $25 a month. Recently, the company also expanded its reach to the US with a brand new app that has everything from an offline-viewing function to updates for live classes to a community interaction feature — all of which Martin explained was meant to make "learning the ropes easier, more intuitive, and quite frankly just prettier."

And their ultimate goal? To make learning Shibari more accessible to everyone — whether you want to do it solo, alongside a partner or even with a friend in a platonic context.

"The benefits of Shibari are as varied and unique as the people practicing it."

After all, as Roux reiterated, there are many benefits to practicing Shibari and everyone does it for their own reasons. According to her, many people find that it helps "deepen intimacy and trust between partners," facilitates "self-awareness and empowerment," fosters sex and body positivity, releases tension, and can be enjoyed as physical exercise or cognitive stimulation. Roux also said it pushes people to develop a "better consent culture and language around desires and boundaries." And this is especially true since it's very different from other types of bondage, most of which are "focused primarily on the end result, oftentimes to restrain someone as effectively as possible as part of a greater BDSM session."

Roux continued, "Shibari is also dedicated to the process, treating the act of tying as the end goal in itself. For Shibari practitioners, it's a craft that requires time and repetition, and learning, understanding and connecting with both your method and your medium."

Her main fascination with rope bondage, throughout the years, "is the opportunity to create a safe(r), sacred, and intentional space to experience and express intense emotions that we tend to avoid and consider negative or undesirable, such as vulnerability, pain, shame, sadness, loss of control or power," she said. "These emotions are a part of the human experience and also intimately connected to their 'positive' opposites: Confidence, pleasure, pride, joy, empowerment. All of these emotions can be met and observed in a tying session, consensually and without judgment."

She added, "This is something very powerful and that can be deeply transformative."

Related | Why Is Google Censoring This Polyamory App?

So whether you simply pick up Shibari as a fun hobby, an artistic outlet, or a more meditative practice focused on intentionality and intensity, Roux concluded by saying you'll at the very least learn "a new skill you can really geek out over," all while "seeing yourself improving with each session and knowing that there's a growing Shibari community that shares that passion."

She concluded, "Personal as it may seem to anyone unfamiliar with Shibari, the sense of community and finding space in 'the rope scene' are often huge and important drawcards, especially for people who have felt marginalized by their 'kinks' or unconventional physical, emotional or creative expressions. The benefits of Shibari are as varied and unique as the people practicing it."