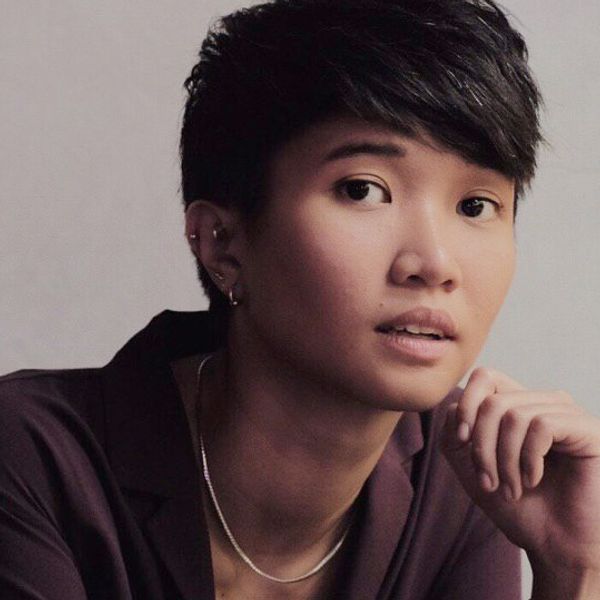 Samantha Lee is a filmmaker who puts a lot of heart, and a lot of herself into the movies she makes. And of course, as a queer woman coming from such a conservative country like the Philippines, she wants to show narratives that advocate for women's and LGBTQ+ rights — especially with the Philippine anti-discrimination bill still hanging in the balance of the political system. Lee's first film Baka Bukas (Maybe Tomorrow) won the "Emerging Talent Award" at Outfest 2017 — the biggest LGBTQ+ film festival in the world. And her latest film Billie and Emma has been shown in over 30 festivals around the world, winning several awards, and selling out tickets at the 2019 Newfest Film Festival.

Billie and Emma tells the story of a troublemaker named Billie (Zar Donato), who is exiled from the big city to live in a small town with her aunt who also happens to be her school's religion teacher. When she arrives at the Catholic all-girls school, she sticks out like a sore thumb, and decides to lay low. That is, until she meets Emma (Gabby Padilla), an overachiever who is able to bring Billie out of her shell. But things get complicated when Emma finds out that she's pregnant.

Lee's work is charming and funny in a feel-good way — as all romantic comedies should be— yet nuanced. She's able to use a story about first love as a vehicle to discuss deeper social issues in the Philippines that also resonate with the world.

PAPER spoke with Sam Lee to talk about telling queer stories, her love-hate relationship with Billie and Emma, and how rom-coms are the "Trojan Horse" for her activism.

When did you know that you wanted to make films that tell queer stories?

I was in Melbourne. I took up my masters and then I had a full-time job. I was doing comms for a university, so it's very serious. So my life was really stable. I had friends, I was dating people. I don't know. I just walked out of the club one night, and I was holding the hand of the girl I was seeing, and I kind of just had this realization that, "Why can't I have the same things I have here back home?"

I think moving to Melbourne was when I really came into my own and comfortable with my queerness because I was surrounded by women who were so proud of themselves, and they were so confident about who they were. They weren't hiding anything. And I needed to be around that environment. Because [in the Philippines], I was out to my friends, but I wasn't proud about it. When people asked me before I moved, you really had to ask me. I wouldn't say it openly. It took really coming into my own and being comfortable with who I was before I could tell stories.

Did you know from the start that rom-coms were something you wanted to work on?

Yeah! So that was the kind of filmmaking that I wanted to do. When I was younger, I really loved American indie films. I loved Igby Goes Down, and I loved Rushmore, and all these awkward characters in films. That was a medium that I gravitated towards. I feel like there was so much expectation and burden that was put into Baka Bukas as a film, because it was one of the few queer films that came out at that time that was openly queer. But I really just wanted to make a rom-com! I wanted a film that made young women or girls want to be gay. It was aspirational and dreamy. They wore cool clothes, cool music, cool friends, etc.

The lasting impact of that film is that I have titas (Filipino aunts) coming up to me and saying, "Oh! My daughter and I watched the film, and she came out to me after. She used it as a way to explain who she was." And that was what I wanted the film to achieve.

Traditionally, queer films are really dark and they show the negatives. And while those stories are valid, I wanted to contribute something that was more positive and encouraging to people.

You mentioned during the panel at the Billie and Emma screening something about rom-com being a Trojan Horse. So can you speak more to that?

The movie industry has so much competition these days. It's so hard to get someone to go to the theater. People are less likely to go watch a serious, dark drama than they are to go watch a rom-com. And if that's the medium upon which that I can put my activism in, then why not? My mentor, his name is Jade Castro, he said that films — it's just a clothesline. The clothes are the messages that you want to put upon it. And that's how I kind of see the rom-com as.

What inspired Billie and Emma?

The SOGIE (Sexual Orientation, Gender Identity and Expression) bill and opposition to it [in the Philippines] inspired the film, and just the concept of what family is in a Filipino society is what sparked the germ of the idea. But what it meant to me — because my first film, especially in the Philippines, I think I mentioned a while ago that there was a lot of criticism that was put upon it. And so Billie and Emma was kind of like my response to those criticisms.

What were those criticisms?

That Maybe Tomorrow was too bourgeois. That it only presented one class in society. That it wasn't trying to say enough. That I didn't cast queer people for the queer roles. Like I said, I like reading hate tweets, and sometimes when they work for you, or you can work through them, then why not use them to tell stories that people actually want to see?

What makes Billie and Emma special to you?

My first film really is more semi-autobiographical. Billie and Emma is a world that I had to create entirely by myself. To be honest, I have a love-hate relationship with this film. But I look back on the year that we've had, and we've been in more than 30 international film festivals, and that's pretty amazing. I see myself as someone who exists outside the Philippine movie system. I'm kind of an outlier.

Someone asked me during the Sunday screening if I think my film will have an impact, and then I cried. And it's because I really don't know because I'm such an outlier and the things I do and the fests I go to, they don't really make a ripple in the Philippines. I don't know what this film means to me except for the fact that I'm really proud that I was able to stand up for the things that I wanted to stand up for in terms of casting queer women, and having the pro-choice ending. So that was something that I really fought hard for.

A love-hate relationship with this movie. Why?

I've never really talked to anyone about this, but since I see myself as being on the tail end of this journey. I think that Maybe Tomorrow was such a personal film, and it was based on my life, and it received a lot of criticism, which I took really personally because it's my life's story. And then I made this thing that's far from myself — I mean, it's still me, but I made it utilizing the criticism of other people and using that to build the film, and people actually loved it. It's kind of like, "I don't know if you like me for me, or the me that I kind of tweaked to be this version of me that you wanted."

What other challenges did you have making the movie?

I think it was challenging because I didn't have, off the top of my head, an artista (big Filipino celebrity). Because I wanted as many people as possible to see it. And it's like I'm introducing two relatively unknown actors, and I wasn't sure if people were going to come out and watch it. And the other challenge I guess was in the writing process. I wanted to have a collaborator for this film, and I think two of them fell through and I ended up just writing the whole thing myself. That was really difficult. And then finding funding also was hard. It was hard to find someone who believed in my ending the way I wanted it to be.

But you had some government sponsors for Billie and Emma. How wild is it that a conservative government backed your film?

I have a funny story about this. So, at the festival, they have a "Gender-Sensitivity Award," and when they were reading the citation, they were like, "This film goes out to a film about friendship, and we give it to Billie and Emma." And so when I got up there, I was like, "Thanks for the award, but just to clarify they aren't friends. They're actually together." We still have a long way to go. That anecdote is so stereotypical of the way Filipino society handles the LGBTQ+ community. They'll sweep it under the rug and call it many other things. And they'll live with it, they won't attack you for it, but they just won't acknowledge it for what it really is.

The film is set in a very Filipino context. How do you think it resonates with audiences all over the world?

I think that's what was surprising. Maybe Tomorrow, the dialogue was 50% in English, which is why we did really well in North America because people could watch the film and not have to read a lot of subtitles. But [Billie and Emma] takes place in a small town, a lot of the dialogue is in Filipino, it's set in the '90s. So I was like, "I don't know if I'm going to hit the same festivals that I did with Maybe Tomorrow." But we actually exceeded it, and I think it's because to this day the things I discuss especially in countries like the U.S., being pro-choice and LGBTQ+ rights, they're still in such a fragile state. Someone [who watched the film] in Wales said that it's still about first love, and it doesn't matter how far away the film takes place. The emotions are still the same.