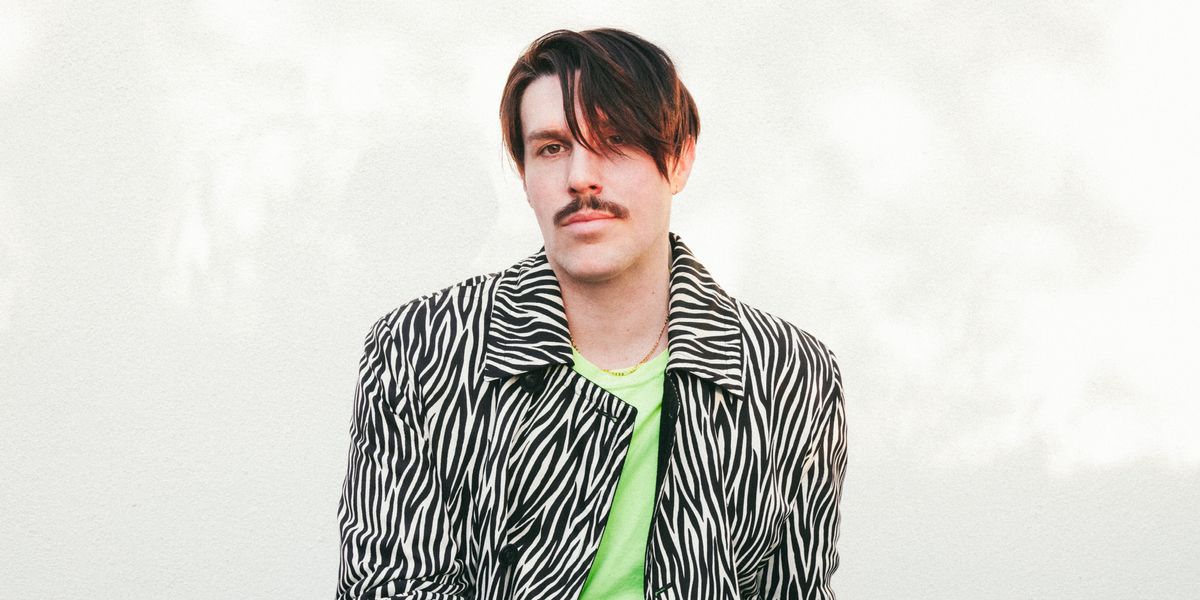 The week before Super Bowl Sunday, Sam Sparro is in New York, picking at his lasagna and mulling over the infamous Janet Jackson Super Bowl boob reveal that once scandalized the masses. That incident, which happened in 9/16ths of a second with 100 million people tuning in, changed everything for Jackson, but barely scathed co-performer Justin Timberlake.

"And you know what JT did?" Sparro says. "Threw her right under the bus! Classic."

Love it or hate it, Super Bowl's 2004 Halftime Show freezes an era when pop performances almost always held an element of surprise — something Sparro argues is largely missing from today's entertainment landscape. To Sparro, few artists today are as exciting as Jackson has always been, with her effortlessly experimental mix of R&B and pop, inimitable choreography and smoldering sex appeal.

Now 37, Los Angeles-based Sparro is reliving the magic of Jackson's early innovations, when she collaborated with producers Jimmy Jam and Terry Lewis to pioneer the new jack swing genre on blockbuster concept albums Control and Rhythm Nation 1814. That nostalgic appreciation is everywhere on Boombox Eternal, Sparro's just-released third album and his first full-length in eight years.

"All that stuff is still in my DNA," Sparro says, referring to '80s-era Jackson. "I fucking love nostalgia, I always have. My music's always nostalgic. I don't know exactly why, but I think I over-romanticize the past."

"My music's always nostalgic. I think I over-romanticize the past."

While Sparro looks fondly on the time when Black female singers like Jackson were America's Sweethearts — plastered on magazine covers and starring in trendsetting films — he hopes to challenge the racism that ultimately ended that period by making his own referential music.

"Look, we all know that if Janet were a white woman and Justin were a Black man, he'd be absolutely crucified," Sparro says. In the aftermath of Super Bowl "nipplegate," Timberlake's career flourished as his solo journey from NSYNC gained more traction than ever. Meanwhile, Jackson's Grammys invitation that year was rescinded, and she suffered reduced album sales for 2004's Damita Jo.

The impact of that incident on Jackson's career is what upsets Sparro most, especially given her legacy for bringing forward important social issues through music. "She was a young pop star singing about education, social awareness and things that weren't really being talked about in pop music at all," Sparro says. "She doesn't get the credit for how groundbreaking she was and has always been. Every Super Bowl Sunday, I get mad about it."

There's no better way to pay homage to music you love than by making your own. Black music, including soul, gospel and R&B, has always been a piece of Sparro's life, having grown up in church with a father who was a minister and gospel singer. Those classic genres appear throughout Boombox Eternal, which also incorporates newer dance and experimental electronic textures to complement his rich, full-bodied vocals.

Boombox Eternal is aptly titled then, given how he borrows from timeless soundscapes for listeners who've grown up with Sparro, as well as younger fans who may not understand the importance of his influences, including legends like Prince, George Michael and Mint Condition.

All of this inspired Sparro to add retro visual camp to the material surrounding his new songs, including pastel colorways and old photos. The album's cover art shows a young Sparro donning shades, a face mask and a pork pie hat while wielding drumsticks. During the songwriting process, he collected old VHS tapes on sale for "literal pennies"' at local Goodwill stores — a self-admitted obsession that has led to Sparro collecting six VCRs.

Now arguably a nostalgic music model, Sparro challenges the notion that playlist approval and endless streams of one-off singles are the only way to get noticed as a musician. "I wanted to make a cohesive body of work," he says, adding that he even produced a limited run of Boombox Eternal cassette tapes. "I still believe in albums. I made this so you can put it on from beginning to end."

This was true of how Sparro grew up listening to music and he wants to keep that alive for those listening to him now. "One of my favorite things was sitting on my bed in my room with my headphones on, listening to my tapes, reading the lyrics and the liner notes and the 'thanks you's,'" he says. "It's so intimate. You get a little window into their world."

Everyone entered Sparro's world when the Australian native signed with British label Island Records in 2007, and released "Black and Gold" from the following year's eponymous debut. The song's instantly memorable hook and existential lyrics about distant love thrust Sparro onto the global stage.

And though Sparro was openly gay in the mid-aughts, blazing a trail for young queer male singers like Troye Sivan or Greyson Chance, major label success got him thinking about his image in self-destructive ways. Behind the scenes, Sparro had already developed a drinking habit to cope with the pain of exploring — and hiding — his sexuality.

"I started drinking when I was probably 14 or 15, and it totally helped me because I was struggling with this inner secret, my sexuality, loneliness, this outsiderness, otherness," Sparro says. "Drugs and alcohol were like [sighs] ...I needed it."

At the time of Sparro's early success, he was managed by Amy Winehouse's former management team. "As we now know, Amy was having a tough time and getting a lot of attention for her music as well, so I didn't want to be out there with any of my messiness," Sparro says, though his desire to keep this image intact further fueled insecurities. "There's this streak of perfectionism, too — of holding it together, presenting well, being chic and well-dressed."

Sparro says Island Records' marketing team saw his queerness as "an asset" to the international LGBTQ community, who similarly found solace on the dance floor. The opposition to Sparro's public sexuality actually began in the States, first with micro-aggressions, then with suggestions that he should somehow change his image. This feedback was innately homophobic, but also confusing because it was at odds with how Sparro presented to his audience wearing finely tailored suits.

"My [U.S.] product manager at the time was like, 'A lot of people don't even realize you're gay and we should capitalize on that,'" Sparro says. "That hurt. I got talked to about dressing a certain way [other than] the way I wanted to dress. I was being maneuvered to be more conservative. Once I was in the label office here in New York wearing a winter trench coat and beanie, and someone was like, 'See, you could wear what you're wearing right now, no one would even know that you're gay. You just look very normal and masculine.'"

"I fully stopped chasing the industry. I learned how to say, 'I don't love that. That doesn't resonate with me.'"

Rebelling against that oppression, Sparro made a grittier sophomore album — 2012's Return to Paradise — and filled it with melancholy disco grooves and deeply confessional lyrics. The project's second single, "Happiness," finds Sparro chasing contentment rather than basking in success. "I feel I've been down for a while," he sings. "They say the grass was always greener/ But you know I haven't seen her/ I feel like I've been dying for a smile."

Sparro acknowledges now that those songs were also a cry for help, which is partly why it took four years to complete. "At the time, I was struggling to get clean and sober, and was nowhere close to being able to talk about that because I wasn't getting it," Sparro says. "It took me a couple of years to start getting well and to really be okay. I had a lot of trauma in the industry as a young, queer artist that wasn't equipped to handle that type of fame or pressure."

Sparro ultimately hit rock bottom. "I went from working in a cafe one day to three months later being on every music show in the UK, touring and having all these label people give me money and try to control me," he says. "There was a lot of manipulation, mental abuse and all-around exhaustion. I was fucking worn out." He pauses, before adding: "I"m still worn out from that time in my life, honestly."

Once Sparro's label unceremoniously dropped him after Return to Paradise failed to replicate the success of his debut, he was forced to finally focus on recovering. This year, Sparro celebrated seven years of continuous sobriety, and commemorated the occasion in a revelatory post online.

"I'm fairly private about my personal life but I felt moved to share this intimate part of me with you today," he wrote. "I know there's someone reading this who is suffering and feels helpless, hopeless, lonely and ashamed and is thinking that their life is not worth living. I once felt that way. I was in so much pain and deep in addiction. The thought of leaping off my 13 story building crossed my mind often. I was broken, suffering in silence to keep up the illusion that I had my life together, that I was successful and happy. From the outside it probably seemed like I was to a lot of people — even those close to me."

These days, Sparro is an independent artist completely in control, looking back at his early years of exposure with a healthy headspace. Getting clean and falling in love (Sparro married DJ Zion Lennox in 2018) helped Sparro rediscover his purpose in making music. Boombox Eternal is the product of an artist finally free to create based purely on instinct rather than industry mandates and self-doubt.

Such freedom is evident in songs like "Everything," where Sparro is over-the-moon at receiving reciprocal love. "So many lovers had a limit, but not you," he sings. On his uplifting anthem "The Ppl," Sparro finds love in community, "not by choice, but by karma." And on "Save a Life," Sparro sings to a past self who is "living on borrowed time," from the perspective of someone who's walked through hell. Sparro extends all this love to his choice of collaborators ("I love working with family"), including We Are KING, Maluca and Nikka Costa.

"And you know what [else]? I fully stopped chasing the industry," Sparro says. "This idea of having what other people have because it's contemporary or 'hot.' I learned how to say, 'I don't love that. That doesn't resonate with me.'"

He continues, quoting the endlessly memeable Marguerite Perrin (AKA "God Warrior") from Trading Spouses. "I can walk away now when something doesn't feel natural, if it feels unnatural and tainted and not of God!" Sparro says.

Doing that has also set Sparro free to make whatever he wants from here on out. "That's why I think there's so much joy in this album, too, because the fact that I'm grounded, I'm in a good relationship, and I'm clean and sober," he says. "But I've also accepted that it's okay that I love what I love and that I don't have to criticize or devalue other peoples' work. I can just say, 'It's not for me.'"