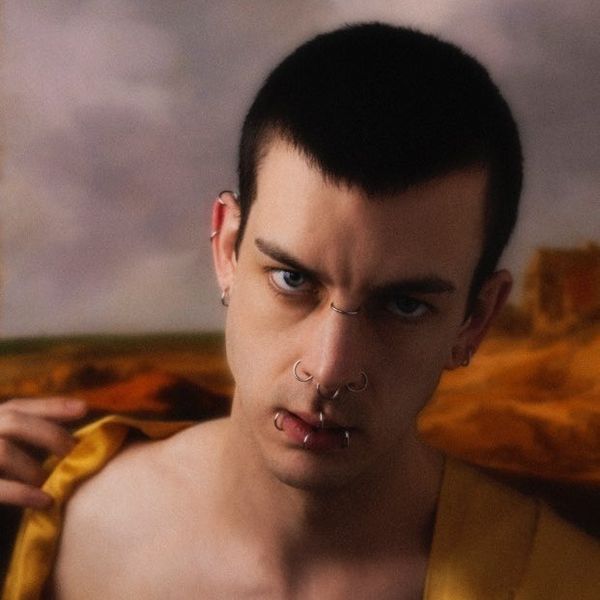 Sakima Takes Control of His Own Story on 'Virtus Domum'

Rising London singer, Sakima, has quickly made a name for himself with his unabashedly queer pop that isn't afraid to talk about the messier side of things. Looking to breakdown the taboo and lead by example, Sakima is refreshingly candid about his own gay experience, delivering it in a catchy, and downright sexy, form that is just as at home in the club as it out of your laptop speakers while you dance for yourself in your bedroom mirror.

Sakima's latest single, "Virtus Domum," off a forthcoming debut album, sees the artist address themes of coercion and insecurity as he details the all too familiar story of an older man preying on the naivete of young men coming to terms with their sexuality. Using hedonistic pleasures like drugs and alcohol to make his victim pliant, "Virtus Domum" quickly wades in to dark waters despite a buoyant, upbeat instrumental.

Sakima's canny ability to use his pop as a vehicle to discuss serious subjects is what makes him shine. In a genre dominated by one-dimensional hetero-normative love stories, Sakima not only positions himself as a queer alternative to the monotony but as one that won't beat around the bush when it comes to his message.

We caught up with Sakima ahead of the PAPER premiere of his new single, "Virtus Domum," to chat inspiration, insecurities, and what lies ahead:

What was the inspiration behind "Virtus Domum?"

I've been really obsessed with Diana Gordon for a while now, especially how she's hyper-dynamic with her sonic presentation. She tells each one of her songs with such a variation in her vocal performance but still connected as a whole project by her melodic vocabulary. I wanted to play with the invert of that idea, telling stories more conceptually with really contrasting production styles but with a similar vocal through out. And the story of "Virtus Domum" is set in a night club, hence the club beat through out it.

It's a fun way to work because I never would have approached this genre of music (albeit still with heavy RnB strokes) if I hadn't stepped outside my usual approach to making music. I'm also just way more focused on story telling above all else. It started with my first EP (Facsimile) and then the concept of songs with dense narratives started to evolve through everything I've made up to this single. I guess that's also another idea I've borrowed from Diana Gordon, did I mention I'm obsessed with her?

In the song you talk about being taken advantage of, does that draw from personal experience or something you've seen transpire?

Personal experience. It's a weird situation I've put myself in because over the years I've transitioned from denial and secrecy to finally being able to talk about it out loud, and I made this song as a sort of final resting place for those memories. I wasn't even going to release this song or at the most it was going to be an album cut, but after some recent interactions with certain music industry people I felt a really overwhelming desire to tell this story as a sort of 'fuck you' and also as a sort of warning. So the weird part of the situation is that even though I felt compelled to tell this story in a song and release it, I don't know how much I want to tell it in any other format such as in press or whatever it happens to be.

I feel like when you're just starting to come out and embrace your identity there is this huge pressure to prove your queerness and make those first relationships or encounters seem more perfect than they actually are. I was wondering if you felt the same or maybe had a different take?

I think everyone has at least witnessed the pressures to be perfect, but I think for queer people, especially cis-white-queer people there's a stepford wife syndrome sorta thing happening where they think in order to beat the"system" they have to look like the "system". They're so close to the white heterosexual normalcy of western society that I think certain individuals or indeed collectives of queer people can find it hard to resist adopting certain heterosexual stereotypes, even though what a lot of us are comparing ourselves to is a culture that has historically suppressed us.I think we just have to set fire to whatever it is we consider to be perfect or acceptable ways of living or looking, especially when it comes to the idea of whiteness, heterosexuality and marriage being perfection. I've never personally aimed to achieve perfection in my work or personal life, for me it's about reaching a threshold of happiness and constantly adjusting your actions and relationships to stay within that threshold.

The title "Virtus Domum" translates in Latin to "Power House," what's the story behind that?

I've deliberately veiled the song title so I'm not going to give it away that easy. But some fans have already started to figure it out which makes me very proud!

If anything I really hope that for anyone who relates to the track, that it gives them a sense of control over their own experiences, and reminds them that they are in charge of what happens to them. Even when something happens to you outside of your physical control, you still own your story and what becomes of it.

What lies on the horizon for Sakima?

I'm finally starting to pull my first album together, Project Peach, in a way that's sort of finally making sense sonically! And on top of that I'm finally looking at getting back on stage and doing some shows, probably in and around London to start with then further out. I really want to play in the US so bad but lord knows them artist visa's don't come easy! And I've also been working hard to extend what SAKIMA is, as more than an artist but also working on other peoples music, as well as some visual art as well that all falls under one name.