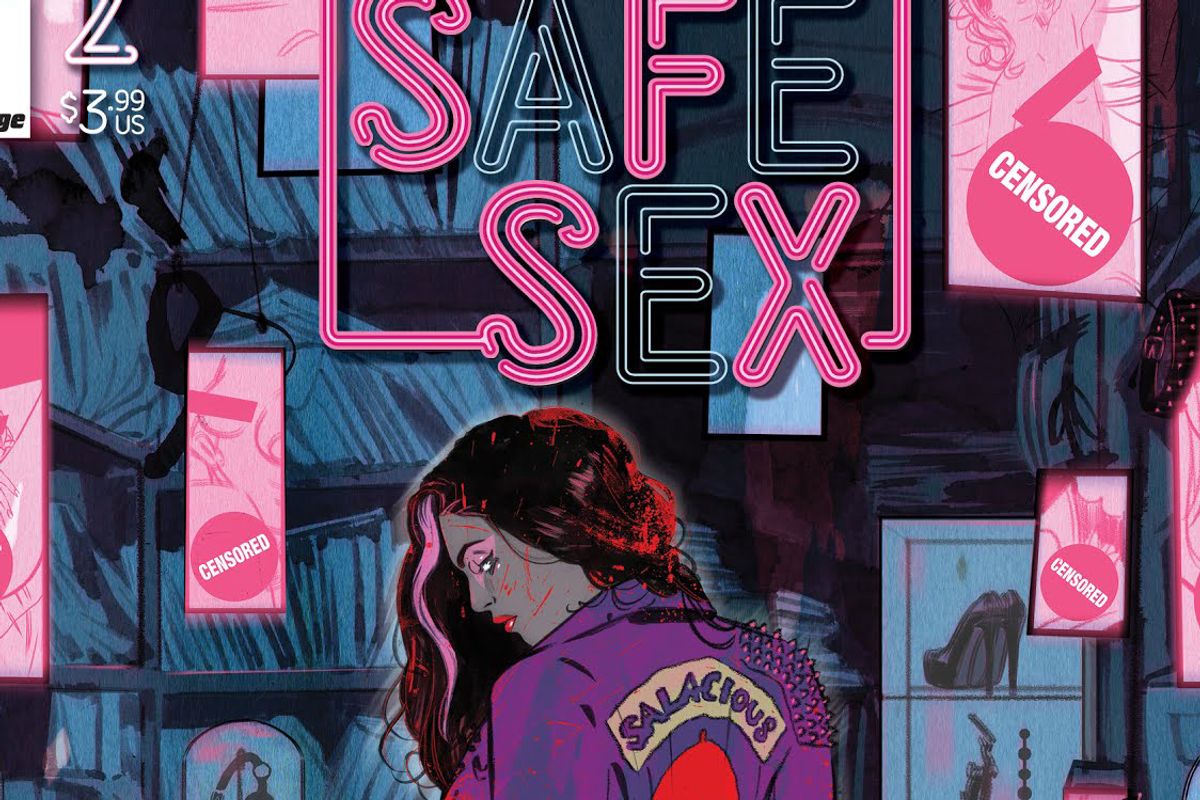 Though Marvel Comics and other graphic novel publishers have stepped it up in terms of representation and diversity, with characters of color and LGBTQ+ heroes, none of these stories are quite like the queer, sexual utopia/ dystopia that published author and sexual politics journalist Tina Horn has created with Safe Sex. This new comic book series, which is set to release an issue every month until March 2020, explores sexuality, kink, and politics in a way that other comics have not.

The Party, which Horn describes as "the ultra-conservative religious organization that has taken over America and is behind all this bureaucratizing and policing," is the super villain. And as the story goes, they colonize and transform The Dirty Mind into a facility called The Pleasure Center. This is where the governing body tracks people's sexual experiences. Horn explains, "People are supposed to report on their own sexual experiences so that they can maintain their purity scores — kind of like a credit score, but also kind of a little bit like a social cache and social media-type thing, and it gives you more access and resources within the society."

Though all of this is part of a science fiction narrative, none of this is too out-of-this-world. The comic talks about themes that are relevant and resonate with what's going on in today's political climate. PAPER spoke with Tina Horn to talk about creating Safe Sex, and why she thinks comics are an effective way to get her message across.

This topic hits close to home, because these days America isn't exactly the safest place in terms of sexual health, with reproductive rights being threatened, for example.

In my work, I'm interfacing all the time with real people's real ideas right now in America in 2019 about sexuality and gender and what that means. That definitely includes sexual health and reproductive rights. But something that is very important to me as a queer person is just sexual expression. And that might be sartorial choices like fashion and glamour. That goes for art, that goes for just freedom of speech in public places. And, increasingly public spaces are online. We have seen all kinds of censorship of sexual expression online.

FOSTA-SESTA is a new American online that had overwhelming bipartisan support from Congress that Trump passed into law in 2018 that basically holds third-party platforms online accountable for communication about sexuality on their platforms. And those platforms may be places that you may be familiar with such as Craigslist, and Facebook. So because of this law any communication online can be subject to a lawsuit, and the writers of those laws and supporters of those laws claim that it's to protect vulnerable people, women, and children from trafficking. But how it actually plays out is that it freezes free speech, especially for people who are already sexually marginalized or whose sexuality is already seen as obscene or transgressive or dangerous. And it also cuts off the ability of consensual sex workers to connect with their clients, and tools and resources for keeping themselves safe, and also connecting with other sex workers and building community.

And what role did you want Safe Sex to play in countering that, or at least in opening people's eyes to the situation?

Shit is already happening. So I do want this story to call attention to the fact that it's already happening. But I also want to tell it in a way that is a tense and suspenseful thriller that people will be entertained by. And I want to make that really clear, that I have lots of outlets for talking about this politics in a didactic way, or giving lectures, or reporting, or on events, or giving platforms to other people to say what they think about the discourse around all this. But for this, it's a comic book! So I also want people to be entertained. I want people to be invested in the characters. I want people to care about the fate of the characters. I want people to be grossed out by the horror and intrigued by the sexuality, and I want people to be into the outfits and want to cosplay the characters. We got meme-d, and that made me feel really good that somebody turned a panel into memes. So I want it to be a piece of pop culture that we'll also really enjoy. So even though when I talk about it I talk about all of this politics stuff, it's very integrated and interwoven into the point of the comic book, which is to be entertaining.

You write for publications like Rolling Stone, have a podcast, and are also a kink and sex educator. What makes your comic book audience different?

The investment that comic book fans have in the things that they love is so intense, and I know exactly what that feels like because of the comics that I loved my whole life and continue to learn about. I'm never going to stop being a comic book fan myself. And, you know, I read comics for different reasons than I listen to a nonfiction cultural podcasts, than I read articles on The New York Times.

Why do you think the sci-fi graphic novel is such an effective medium to send your message?

This is so nerdy, but I wrote my undergrad thesis on semiotics in comic books. And part of what I studied and the case that I made in that thesis was that there is something very unique about the intersection of imagery and language in sequential art that creates a sense of identification with characters, and not just because you're seeing someone that looks like you, but the experience of all the messages you're absorbing from the imagery, and then all the messages you're absorbing from the text have a very special sort of resound. I think that that's why comic book fandom is so fervent, is why we have such wonderful results in people being so passionate about the comics that they love, and also has a dark side where people feel such a strong identification with the comics that they love that if something happens to them that they don't like they get really hassled because they feel a sense of ownership.

How do you want to utilize that power?

I think that I try to use storytelling as activism, and I think that storytelling has the potential to change hearts and minds, because when people care about what a character is going through, and they actually follow a characters point-of-view and subjectivity, they go on that emotional journey with them and they care about their fate. And if you're a queer women like me, you don't see enough queer women in stories, it's so fucking meaningful to see queer female subjectivity in a story, because you realize you've been spending your whole life shifting your identification to people who aren't like you. Then there's idea of people who are not queer, and not women would experience this subjectivity of the life of a queer woman, the life of a sex worker, the life of a woman of color — that they would have empathy not only for the characters but also the actual women in their life, the actual queer people in their life, the actual sex workers in their world, whether they're people that they know or that they're seeing in the news.

Issues 2 of Safe Sex drops on October 30. You can buy the comic books through Image Comics, or at your local comic book store. The Dirty Mind merch, designed by Jacq The Stripper, is also available here.

This interview has been edited and shortened for publication.