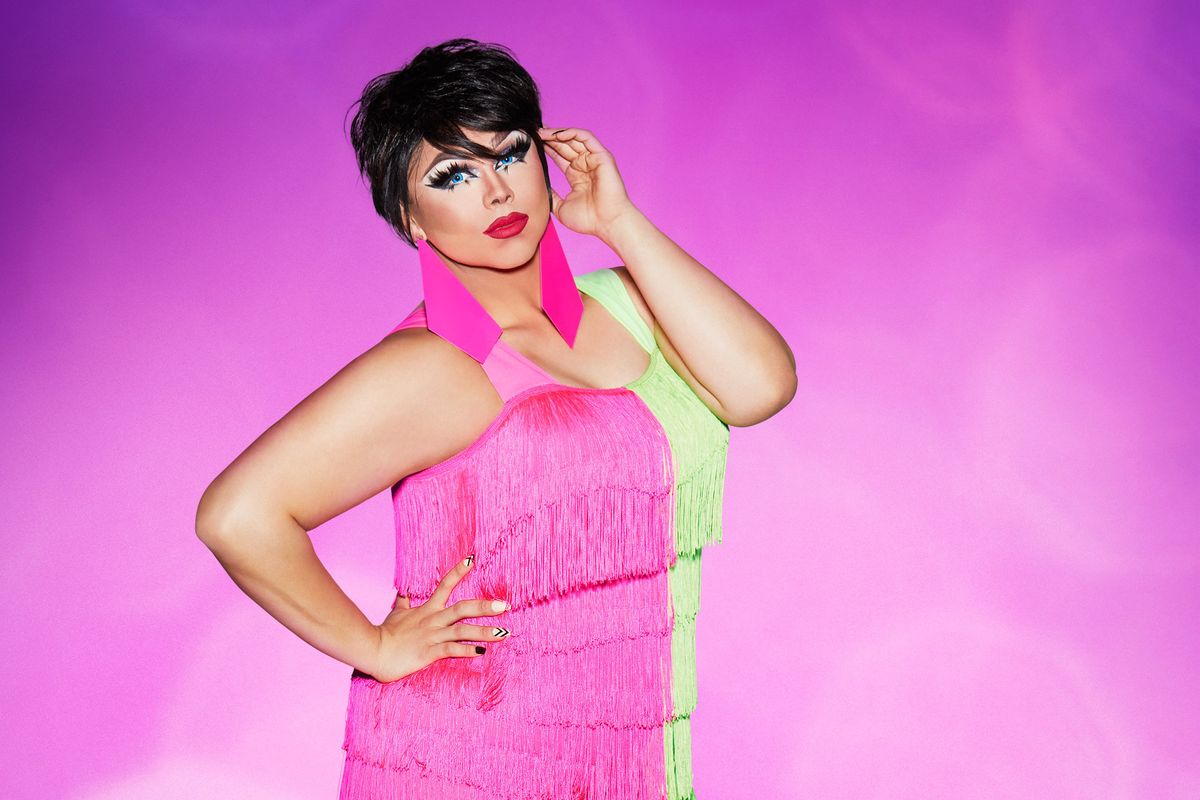 On the second episode of RuPaul's Drag Race season 10, the queens split into teams for Pharmarusical, a choreographed lip-sync extravaganza. Surprisingly, the less-prepared team — led by this season's drama pot-stirrer The Vixen — won, leaving Asia O'hara's team in the bottom.

Eureka O'Hara and Kalorie Karbdashian-Williams were the night's weakest performers and the queens, who had bonded so quickly that they'd written a song about being big girls, faced off in a lip sync. Kalorie was sent packing and her emotional exit was brutal to watch.

PAPER chatted with Kalorie Karbdashian-Williams about what it takes to prepare for Drag Race, the drag scene in her hometown of Albuquerque and how drag taught her to love her body.

It was a whole lot of emotion.

As you were packing up you seemed most upset about going home so early in the season after all the work you'd put into preparing. What goes into getting ready to be on Drag Race?

There's a lot of work that goes into it. They give you all of these different things that they want you to prepare for that they may or may not even use, so you have to put all this work into getting everything together, coming up with he money to buy all this stuff. In Albuquerque we don't have fashion designers — we have seamstresses. A lot of the costumes we perform in are usually made by us, so granted they're not as high fashion. It was hard trying to prepare all these looks in the short amount of time that they'd given me, so thats why I was so beat up. I worked so hard on all this stuff and I don't even get tog show it now.

But the reality is that even though you were eliminated early, you're still a Ru girl for life.

At first you beat yourself up, you're so sad, you're so heartbroken. Nobody wants to go home. Everybody wants to make it to the end, everybody wants to be there for the crown, but then of course once you get home you start to realize, after all the sadness disappears — well damn, I'm one of the 14 people that got to experience all of that. Its humbling, its a beautiful experience.

Tell me about the drag scene in Albuquerque.

Its very small. There's a handful of girls that are really put together and they really bring something super creative to the table, but its very small.

You said that back home you're "somebody." Who is Kalorie in Albuquerque?

Despite going home early in the season, you did win the first lip synch — you really ate that. How does it feel to have had that moment?

That moment was honestly so incredible, especially because I got to do it right in front of Christina Aguilera, it was amazing. The one thing I didn't get to show was the creative aspect of who I am, and thats fine, but at least I did get to showcase my performance ability.

What was it like facing off against Eureka after you two had bonded so quickly?

It was heartbreaking. I built this connection with somebody, then of course to be on the bottom there's all those emotions, and when it's your friend — I'm either going to take away her dream or she's going to take away mine. It was really hard.

You talked on last night's episode about your weight loss and becoming proud of your body. How has drag changed your relationship to your body?

[It taught me] to love my body, to love who I am. Being a bigger boy in the gay community is hard, its hard to be big and be gay. So being calorie, I've come to a point where I have this "I don't care" attitude and I love who I am. I love my curves, I love my rolls, I love my stretch marks, I love everything about me. I'm no longer self-conscious anymore — what you see is what you get. And what I see is everything that I love about myself.

RuPaul trying not to laugh as Michelle muttered "Miss Vanjie" in her ear is such a mood.

That mini challenge was so embarrassing. Joanne is not shook.

As soon as Kalorie started sharing her emotional backstory we all knew she was going home. The Drag Race editing has become so heavy-handed.

Aquaria has the best nipples in drag.

Halsey was the guest judge and yet the queens didn't lip sync to a Halsey song. Would she not give VH1 a discount on the rights or was Ru just not interested in watching the girls do "Bad at Love?"

I get it about Dusty Ray Bottoms now. Come to mama.