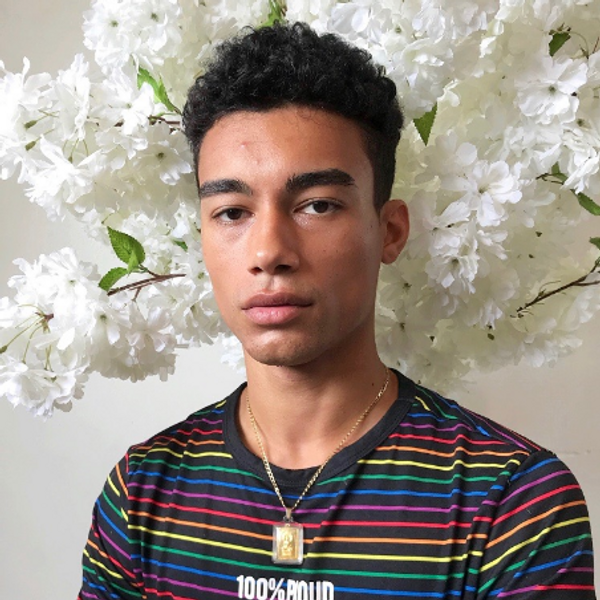 Born in the late '90s, 23-year-old British model Reece King was raised by a single mother and family overflowing with aunties. While caring, King's family wasn't very well off, so he began working long retail hours for minimum wage to contribute to their expenses. Once his modeling career took off and stardom came knocking, he left his job to eventually shoot major campaigns for brands like Diesel and grace magazine covers across the globe.

But when the flashing lights subdue, King remains himself. In fact, he is hyper aware of the concept of self. Reserved, and not wanting to reveal too much, he said, "I have such a hard time trying to talk about myself, because I have this situation where I disassociate myself from job. When I'm at home, I don't really check social media. I don't like to focus on it. I don't talk about it. I pretend it's not real."

A model whose image has been seen by thousands but doesn't like attention may seem like the ultimate paradox, but in reality his shyness is not out of the ordinary at all. "I'm just a little introvert, but I think on social media it probably looks like I'm this big, big character that's always doing something, and loves my picture taken, even though I don't," he said. It's true that once you enter the digital sphere, some people will only listen and some people will only look and formulate ideas of what and how public figures should be.

King's Instagram reaches those who are listening and watching beyond surface. Struggling with depression and severe anxiety throughout most of my life, King's posts have been a visual representation of what it means to stand at the intersection. He talks openly about his battle with mental health and how he manages to juggle everything. "It's been kind of hard," he said. "I've had problems with anxiety, and insomnia, even stuff just to do with my weight, and my mental health. I'm the only person in my family that's managed to get a situation, or job, like this. So it's hard to speak to people about what I feel, or deal with, because some people just can't relate from their perspective."

I share with him how as a younger version of myself, I experienced a feeling many young black people across the globe know too well — the idea that constant stress, worry or fear were all just aspects that come with life, an everyday normality we all go through. Now being much older, I see that things I couldn't quite place my finger on before could be diagnosed and treated. King agrees, "I don't think I actually knew anything about mental health. And it sounds crazy, but thinking back, I don't think I've ever had a serious conversation with someone, that's actually explained, 'You're feeling like this, because of this.' Or, 'Your body's like this, because your mind is here.' I never really had that growing up."

King has managed to find a healthy balance and manifest positive energy into most aspects of his life, saying, "I've just had to learn through a lot of lessons, a few bad moments. I've had to learn what's acceptable and what's not. I found that eating and drinking clean really helps me feel better inside. I also found meditating and reading and some time alone helps. I have plants and a little zen garden that I try to do morning and night. I try to stretch and workout a little bit. And I have three dogs, so it's really good energy with them. The best thing that probably helps me is just knowing that everyone is actually going through something as well."

And when things get really rough, there is always one person he can rely on. "My mom definitely has helped me," he said. "But she doesn't really know a whole bunch about what I do. And I still have to explain the difference between a casting and a request casting, and a campaign. Because it's just not her world."

King's most profound advice regards changing ways of thought. "I think it's a personal journey of learning that there's different ways of thinking. That's something that the person, the individual, has to just go through. Sometimes you have to do some stupid things to know that. I don't actually think I actually understood that sort of advice when I was younger, because your mind space just isn't there. With a little bit of age, I kind of understand you are your own world. If you feel good, then it's good. I've had to learn self-care."

Coming to terms with his sexuality as a bisexual black man was a large part of that journey to self-care. For King, understanding his sexuality was not an easy journey. "Just being a bit younger, like 18 or 19, you just don't know. It's very confusing. I think for a year, I was really, really convinced that I was asexual, because I was so confused that I didn't have a preference," he said. But he soon came to understand himself better, realizing, "I don't really care if it's a woman or a man, because it doesn't make a difference if I'm in love. But then I also felt so insecure towards that subject and I had put it off for so long, I didn't actually know who I really was. I knew what I liked in my head, but when it came to real life, I didn't really know how to interact."

"I was really, really convinced that I was asexual, because I was so confused that I didn't have a preference."

He said he kept putting off his feelings until he and then I eventually realized that this is me for the rest of my life, so I don't really have a choice. I can either make peace with who I am or hate myself or lie. So I think the Gay Times interview came at the right time and I was like, 'You know what, people? I've already said that I'm bisexual, but I guess it could be inspiring and helpful if I actually took that and put it into the modeling influences situation of things.''

As a public figure, King battles the negative stereotypes and tropes applied unfairly to bisexual people.

"With the whole picking sides thing," he says, "I've had situations where I've been talking to a girl and then someone will say something like, 'Oh, girl, you can't talk to him because you know he's messed with boys before.' I've had situations where I'm talking to a guy and then it's like, 'Is that girl a friend or is she more?' If I posted pictures with my friends in the past, it would always just get turned into, 'Oh, that has to be someone he's romantically seeing or sexually seeing, because he likes guys and girls.' But I kind of have to tell people, I'm not interested in every human being."

King also addresses society's desire to pigeonhole black men and fetishize them into lustful objects, saying, "Being biracial, I definitely think I've been sexualized a lot. Sometimes, if people know I'm bisexual, they kind of just think, based on the way I look that it's like, 'Oh, he's only interested in one thing.' I guess that's a fetish on their end. I've tried to find more positives in the situation, but when I was younger, it was definitely harder. I definitely had to smile through a lot of uncomfortable situations, but everything comes around."

Throughout his career, King has helped young people all over the world simply by way of being himself. Standing tall at 5'11 inches, he has a unique aura of positivity that draws you in. In a world consumed with the digital realm, he remains centered, introspective and optimistic for the future. "I believe in the law of attraction," he says. "I think I manifested a lot of things that I've wanted in my life where I'm at right now. And I had to learn that not everything I thought I wanted is actually necessary. It's a process of learning who I am and just growing as an adult. I mean 23, that's barely anything, yet."