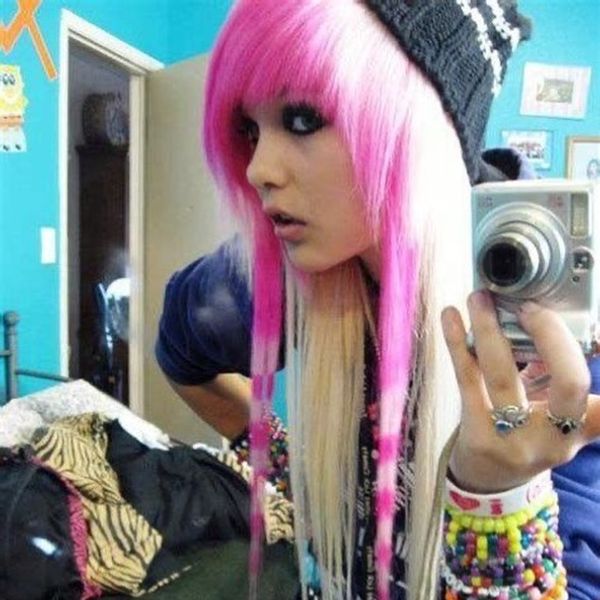 Whether we're talking about the imminent return of Jeffree Star, Warped Tour's last hurrah, or the My Chemical Romance reunion, #20ninescene was the gift that just kept on giving. But just as we started mourning its loss, the internet — in its infinite brilliance — has managed to keep the Myspace-era nostalgia alive for an entire decade to come. THAaaat'$ rIGhT :3 wELCoome 2 lyk tHE RAWRinG 20s xD!!

And just like the #20ninescene tag, you can thank Twitter user @the_life_of_daz for the near-flawless pun — though, in our esteemed opinions, the RAWRing 20s in far more than just a pithy hashtag. After all, who needs all that Great Gatsby stuff when we could turn back time by listening to Brokencyde while trying to fix that DIY Manic Panic job? Albeit (hopefully) not in our parents' bathrooms? Or, figuring out your alliterative Myspace name while learning how to code HTML? Or, wearing a white studded belt with a 3Oh!3 tee and some Hot Topic skinnies?

And while we could probably do without the clunky digital cameras and your ex-boyfriend's crunkcore project this time around, there is something to be said about the nostalgia factor when it comes to bringing it back to where it all began. Just ask Luna Lovebad, who you probably followed via her Izzy Hilton moniker back in the day.

"It trips me the fuck out that it's been a decade," Luna says, before adding that she still loves to post the occasional #TBT on Twitter and Instagram. "It was so iconic. It was like this hybrid of alternative fashion, and I feel like there were different subcultures within scene."

After all, as Luna explains, while she may have been "that queen who wore pink, looked up to Paris and Nicole's Simple Life era, and listened to Ladytron," that was never something that made her feel all that set apart from the "more emo" kids who "wore more black and listened to harder music."

However, it's not just the original scene kids who love the idea of the RAWRing 20s. Calling it "a weird, guilty pleasure" that they "wished they could have done," Daz explains that they've noticed a ton of responses from fellow Gen Z'ers — many of whom were too young to actually have a Myspace at the height of the movement's heyday.

But as for why scene has resonated with the younger generation, it may have something to do with the trailblazing inclusivity of the original movement. As Luna explains, scene was way ahead of its time in the sense that the community also served as a welcoming place. In fact, she credits it as her "introduction to transitioning."

"I feel like scene introduced this like style of androgyny in some ways. Boys had long hair and wore liner and girl pants. Boys kissing boys was cute and no one gave a fuck," she says, as we talk about the potential throughlines that may have helped keep it relevant — even a decade down the road. "[Like, I] was able to express my femininity in like a really exaggerated and alternative fashion."

And that's why she "loves that there are still scene kids out there," even if it feels like we've all remained "recycled scene kids in a way" since the Myspace days. That said, if there's one thing we're heartened by, it's the idea of sharing a little piece of internet culture with a whole new generation, especially one that helped us eke out our identities as lonely suburban mallrats. And while no one can tell what it may turn into in the age of TikTok and Juul memes, we're sure excited for the possibilities.

Granted, we may not start writing Taking Back Sunday lyrics on our arms in Sharpie again, but at the very least we can revisit some of their greatest hits while crying in a car about a breakup, since some things just never change. So start asking for a choppy cut and keep caking on that eyeliner, because this is our decade and Lolz we r sOooOooo rdyyy <3 ^_^