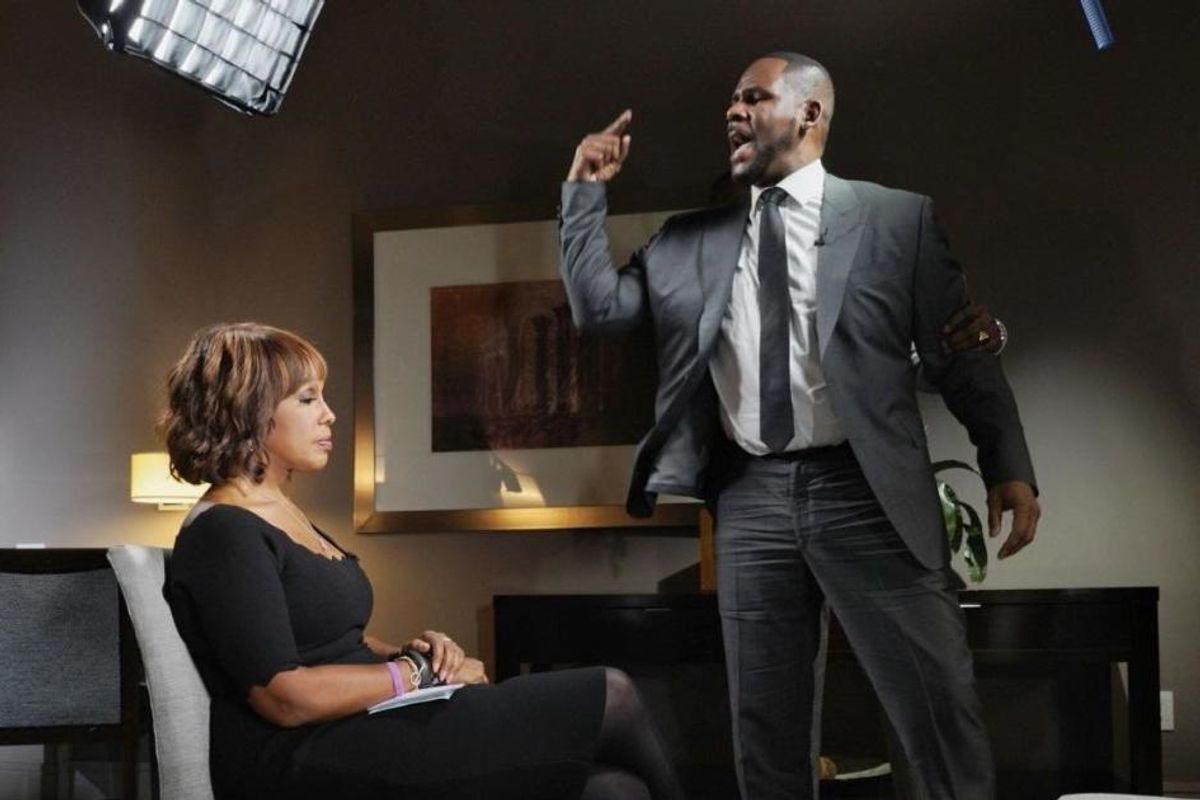 R. Kelly Is No Victim

If you've seen Gayle King's exclusive CBS This Morning interview with R. Kelly, then you already know how explosive it is. More on that in a moment.

A primer on what more we know about the case so far: The embattled R&B singer had been plagued with allegations of sexual abuse of underage girls and women for decades. We all know he was acquitted of child pornography charges back in 2008, after being accused of appearing in a sex tape with a minor.

We are also now familiar with Lifetime's dream hampton docuseries, Surviving R. Kelly, which featured searing testimonies from seven women who claim Kelly abused them when they were underage. In the series, we also heard from dozens of other subjects within the singer's inner circle, who had their own accounts of Kelly's indiscretions.

Corroborating news of R. Kelly-led sex cults, Kelly's ex-wife Andrea Kelly told stories of being starved and beaten. She was also aware of and humiliated by her husband's affairs, until she took the two children she had with him and fled. She elaborated more on her experience as an abuse survivor in a New York Times op-ed. R. Kelly's daughter Buku Abi spoke out against him. Lady Gaga, Chance the Rapper, and Celine Dion all issued statements disavowing their work with him, and pulling their collaborations from streaming services. (Gaga is herself an outspoken sexual abuse survivor, so her journey toward speaking up about Kelly has been complicated).

A heated discussion about Surviving R. Kelly erupted online, including continued actions from Time's Up. Additionally, a viral movement that had been at it for years, #MuteRKelly, gained more traction, and was ultimately successful in its aim to pressure the music industry to take a stand against one its most successful stars. Despite years of accusations, Kelly continued to perform, tour, and record albums. In January, RCA, Kelly's longtime label, dropped him from its official roster of artists. Soon after, Michael Avenatti, best known as Stormy Daniels' lawyer in her suit against President Donald Trump, claimed he'd joined Chicago law enforcement in building a mounting case against Kelly. On Twitter, Avenatti wrote that among damning evidence that could bring Kelly to justice was yet another tape showing him engaging in sex acts with a minor.

I can confirm that we will be providing a second video showing R. Kelly engaged in sexual assault of a minor to pro… https://t.co/rOJJr6F8g0
— Michael Avenatti (@Michael Avenatti)1551096063.0

A few days earlier, February 22, he tweeted screenshots of what appeared to be Kelly having sex.

And on February 26, Avenatti shared statements allegedly heard in the tape, including, "show daddy that 14 year old p***y."

These allegations, including testimony from more women who have come forward, gave Chicago authorities enough to charge Kelly with 10 counts of aggravated criminal sexual abuse. He was held in jail last month until he paid 10 percent of his $1 million bond. Cook County prosecutors claim that four victims provided accounts of abuse allegedly taking place between 1998 and 2010. Documents say at least three of the victims were aged between 13 and 16 at the time of their reported assaults. Each count carries a penalty of up to seven years; if found guilty of all charges, Kelly faces up to 70 years in prison. All along the way, Kelly has denied any and all charges against him.

But circling back to King's interview with Kelly. It was an arguably questionable choice for the singer to appear on air, considering how much is currently stacked against him. Some might even say it's a PR nightmare, especially considering how the tide of social media response has, in recent weeks, turned away from Kelly — indicating that maybe we are finally coming to believe Black and Brown girls who reveal their sexual traumas (at least, that's the public-facing assumption).

It is interesting indeed that Kelly — who has presumably untapped power even in his legal resources, especially considering how he's managed to skirt further repercussions or questioning for nearly 30 years — would even want to speak publicly at all. And yet, he sat down with King to tell "his side of the story."

Why would he do that? "I'm very tired of all the lies," he says in the interview.

King, poised but direct, doesn't shy away from why we're really all here. She points out that the women who shared their stories in the docuseries and to law enforcement don't know one another, and yet, all have similar accounts of his controlling and abusive behavior, from periods of being locked-up and starved in his home to sex that, for them, went beyond what felt safe, comfortable, or normal. It therefore isn't logical that they would all band together in a grand and complex extortion scheme. Is it?

"They are all lying on me," Kelly says.

King posits that Kelly must either be truly special or deeply unlikable for such a massive, decades-long conspiracy to develop against him. She says, "It's hard to believe you." Here, King speaks for so many women who have been silenced by men who loudly proclaim innocence in the face of staggering testimony suggesting otherwise.

Why must sexual abuse survivors work so hard to prove themselves? I hope I someday have to ask this less and less.

Kelly notes, directly to the camera, that because he's R. Kelly, which is to say, a wealthy, powerful celebrity, of course women might be scorned and want to lash out at him. Women gain nothing from publicly reliving their trauma, by the way, even if, let's say, some big pot of gold awaited them at the end of the self-doubt and public crucifixion they endure from saying anything at all. And for so long, Black and Brown women are hardly believed and instead met with suspicion, derision, or perhaps worst of all — indifference. But, okay.

Kelly, who avoided consequences in 2008 "already," he notes, is the one who is being "buried alive." His character has been "assassinated." And plus, how stupid could he, R. Kelly, celebrity and man of God, be to hold anyone underage against their will, let alone sexually abuse them? He's a sexual abuse survivor himself, remember. He was molested from ages seven to 13. He tells King, who remains incredulous that, "It hasn't affected me at all," but rather, his "music." Kelly could beat the odds, so why not the women who are lying on him? Why come forward now?

King calmly explains the way trauma works to Kelly, a trauma survivor who seems to have no concept of how some victims, if they don't heal, become abusers. But even if Kelly is guilty of misdeeds, according to all those lying women and people in his inner circle, he's "not Lucifer," he says, but a man who makes mistakes. There are actual girls out there being raped and trafficked with shackles on their wrists, he points out, as if we are somehow off-topic.

There is then a lot of hysterical screaming and crying from Kelly. Sitting perfectly still, King says, "Robert" repeatedly and reminds him that they are there to have a conversation. We're killing him, he yells, standing up and flailing about. "You sound like you're playing the victim here," King notes.

Haven't we seen this play out before? Just months ago, then-Supreme Court nominee Brett Kavanaugh screamed and pointed fingers and deflected and sobbed after being accused of serial sexual assault, including in a powerful testimony by Dr. Christine Blasey-Ford. He yelled at women who were tasked with calmly questioning him. This, before a Senate hearing. Even with pitch-perfect and "believable" testimony, down to what she wore, Blasey-Ford, a wealthy white woman, was not to be believed. Brett Kavanaugh was confirmed by the Senate in a 50-48 vote, and assumed the role of Associate Justice of the Supreme Court of the United States on October 6.

As always, it is interesting to note how men who stand accused of sexual assault are allowed to behave in public, and the assured perfection the public demands from women who are hurting. Why must sexual abuse survivors work so hard to prove themselves? I hope I someday have to ask this less and less.

At some point in the interview, Kelly admits that maybe, just maybe, he needs help.

"I need help to not have such a big heart," Kelly affirms, tearfully.

It's a tragedy all around to be blind to the harm you cause others, and for those who are harmed to forever know their pain.

Perhaps this is best ended, until the trial's verdict, by the words of Jerhonda Pace, who was one of the seven women who spoke out about her experience with Kelly in Surviving R. Kelly. Pace's strength is sublime. She suggests that somehow, even through unspeakable tragedy, there is room for compassion. Some may feel that way, and others may feel that we have to let R. Kelly go. Neither side is wrong.